I have no Mayan blood in me. Not unless my mother was keeping something from me during all those years. Or my father come to that. Thinking back today, I'm pretty sure that while I was growing up in West Yorkshire, Mayans were fairly thin on the ground. Though we always regarded people from Leeds as Other, a bit weird.

So, I am not genetically predisposed to believe that 2012 will see the End Of Days. I can march into the New Year with confidence, unlike the Mayans, not many of whom I suppose offered boxed sets of Downton Abbey or The Wire as Christmas presents.

Anyway, as we all know, 21 Dec 2012 simply marks the end of a b'ak'tun cycle of 144,00 days and the beginning of another. And since it's only the 13th, as b'ak'tuns go, it's not especially top-notch. Now, if it were the 20th, we might be forgiven for jumping at loud noises and scanning the skies for signs of the Mayan Cosmic Gronk Squad.

I have explained all this to Mimi, without success. I found her rummaging in the desk drawer where we keep Stuff That Really Ought To Be Thrown Out When We Have The Time. I told her that the Mayans didn't sell their calendars door-to-door like the garbage collection men, or the firemen, especially not in this neck of the woods. But Mimi is French and therefore Cartesian. She wants logic and proof. I sometimes suspect her of having been secretly born in Missouri but the physical evidence says not.

So that was my first hurdle sorted out. I can make some resolutions. But which ones Oh Lord, which ones? There are so many out there. I know I am already going to walk more, smoke less, drink less. Not that I drink a lot: I usually spill most of it.

I ned something with more meat on it. I was attracted strangely by Leigh's resolutions for the paranoid, because I go along with Gore Vidal when he said that the man who is not paranoid is a man who is not in full possession of the facts. But no, something doesn't fit the kindly, though sometimes gruff soul I am pleased to think is me.

Then I read Jan Grape's generous article and that struck several chords. The fact is I too haven't been writing enough. I've been procrastinating too much. It's been a case of : Never put something off till tomorrow that you can put off until the day after. Always with a perfect excuse, that goes without saying.

Another resolution: I am going to read more and read better. This occurred to me over Christmas. I haven't been reading enough, and I haven't been reading well. I had settled down one evening with a glass of the true, the blushful, to read one of my Christmas presents: a collection of Kurt Wallander novellas by Henning Mankell. 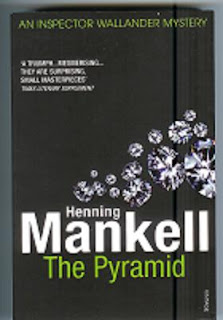 I hadn't read them before, and since one of them first appeared in EQMM in 2003, I was sure I was onto a good thing. But something happened. I got bored. The writing seemed leaden - in English English we might say plonking.

Now usually I get on well with Mankell, and indeed with all the Scandinavian crime writers. But something was up.

It's interesting that Dixon Hill and John Floyd have both written recent articles on 'flat' and 'dull' writing. They were a great help as I tried to analyse the problem, looking for the usual suspects: passive verbs, too many adverbs and so on. It wasn't anything that obvious. The sentences were perfectly well written, but something about the way they were put together didn't feel right. After ten days I still didn't know what the problem was. It might have had something to do with the fact that in the narrative sequences, nearly all the sentences are about the same length, which gives a diddly-dum diddly-dee sort of rhythm.

No, I decided, the problem lies not with the writer, or the translator, but with the reader. I have now been back and read the stories again, while this time acknowledging that I wasn't reading Robert B Parker, or John D Macdonald, but a writer from another country where they do things differently, where they think differently and speak differently. And Henning Mankell is great at providing that Sense of Place which I admire and envy.

Well, it seemed to work well enough. On the second reading, because I was reading perhaps more carefully, more generously, the plonkingness seemed to fade.

So, I am going to try to become a more active and generous reader, and try harder to keep my part of the contract that always exists between writer and reader. I think as a reader, I sometimes forget that that contract does exist.

Well, these resolutions might not seem much but I figure it's enough to be getting on with. I might have re-think around mid-term.

Speaking of the End of Days which I was at the beginning if you recall, I think something much more sinister is going on. On Christmas Day, my daughter Kate who is a theatre stage manager and working on a pantomime in the north of Englnd told me that the day before, on Christmas Eve, the management had sacked Cinderella for Gross Misconduct. Apparently, misconduct is okay, but hers had been grosser than the permitted level. Nothing to do with mice and a pumpkin, just an everyday story of drunken three-o'clock-in-the morning joyriding. Natually the local press had her for breakfast - 'Cinders Fired' - that sort of thing.

Cinderella sacked on Christmas Eve. I am starting to suspect that the Long Hadron Collider is at work here, creating a parallel universe bit by bit. I said it would, ask anyone.

Happily, it seems to be a parallel universe in which Leigh Lundin is still the Supreme Leader and Guide, so not much change there then.

A Happy New Year to everybody.

Oh, and if things turn out right, a Happy New B'ak'tun.
Posted by Neil Schofield at 00:01