Guardian of Death’s Stream of Consciousness 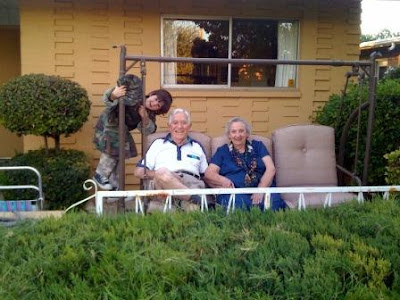 But, hey! That’s actually why my post is up so late.

This picture shows my mom & dad sitting on the glider on their front porch in October 2009. That monkey-like kid is my youngest son, Quentin.

See, my mom has been in Hospice care for about ten months (ever since I took her home from the hospital – one month after driving her there, for a one-week surgery stay – that went south in a very bad way.)

What’s that got to do with a late posting on the blog???

Well, my 84-year-old dad has been (at his insistence) acting as her primary care giver, because — as he puts it: “I’ve taken care of her for the sixty years of our marriage. I’ve just got to take care of her now, son. This isn’t a thing I can let anybody else do.”

. . . coming from an octogenarian who’s been getting around with a cane for the past few years, and lost all vision in one eye the same month my mom initially entered the hospital for her surgery. He’s had over 13 operations on his eyes, due to macular degeneration, etc. over the past 30 years, so he currently can only see at about 20/200 (if I’ve got it right) out of the other eye — even when wearing a contact lens and glasses. When my mom was in the hospital, though, he insisted that I drive him down to visit her as often as he could physically make it . . . complete with eye patch, and while suffering (what he saw as) the indignity of having his youngest son push him through the place with a wheel chair.

I worry about Dad, of course. We all do. But, I think you gotta respect a guy who’s willing to stick-out the “till death do we part” portion of his vows right down to the wire. And that wire – like one of the hair-fine trip-wires I used to rig booby traps with, back as an SF Demo Man – is stretched tight. And it’s right in front of my mom’s feet, now. Just inches, I think. Though, of course, I can’t see it.

not if they're properly rigged and camouflaged. You have to get down in the prone position with a blade of thin grass (if you’ve got it) in your mouth, then use your tongue to move the blade up and down as you inch your body forward, ever-watching for the blade’s tell-tale bend when it comes up against a wire. I’ve done it dozens of times in practice, and several times for real, the sweat pouring off my body as everybody behind me held their breath. [The guys in Iraq & Afghanistan, incidentally, have taken to short-circuiting that method by spraying Silly String in front of them. The pink Silly String serves the same purpose, without tripping the wire.]

Dad almost made it --- with a little help from a hired-care agency, but things went haywire last week. I got a call at 3:30 am. Dad’s scared, yet apologetic voice: “Help, son! I’m on the floor. I don’t know what happened. But, I just can’t get up. I’m stuck. If I stand up, I pass out. Help me!” My wife stayed with my mom, while my daughter watched over our son at home, as I took my dad in to the ER. After initially thinking he’d had a heart attack or stroke, they finally realized he was quite simply – and completely – exhausted. Since that morning, my brother and I have taken turns spending the night at my parents' house.

They let dad go home a couple days later, but he’s still nowhere near fully charged up. Nonetheless, he insisted on being released as soon as possible – so he could get back to his dying wife’s bedside. Since then, I’ve managed to drive him to two doctor’s appointments, while the hired-care helper watched mom. My brother’s been a huge help, as have both our wives. But, something went a little wonky with the care-givers, and that’s thrown an additional monkey wrench into the works. Just as the Hospice nurse has broken out the special meds they reserve for when their patient is approaching the final end. For some reason – maybe because I’ve got some limited medical experience from my SF days and took care of my mom’s IV when she had it in, and also changed her ileostomy bag for the first couple of months, before the hired care givers learned how – the Hospice nurse has seemed to focus certain information onto me. So, she told me, about five days ago, that she’d started giving mom those meds.

Which is how I came to sit up last night (my shift), smoking a cigar while sitting in the glider on the front porch of their small block ranch house in Scottsdale (the one in the picture), the Christmas lights still up on the bushes and eves of the house, and all turned on, because I had the baby monitor receiver plugged into the extension cord that fed them juice. Mom's labored breathing came in broken, lingering snatches, through the monitor, a whisper of a whistle from her damp throat and lungs. The noise soaked the dark night, as I sat reading The Way Through the Woods, listening for any sign of tell-tale change.

Later, inside, I sat by her bed, after rubbing her back without rolling her over off of it, so that she could look up as I worked. My dad snored and mumbled in his sleep beside her. She’s gotten to that place where she sometimes stops breathing for long stretches of time. Then suddenly her chest heaves as she gasps deep gulps of air. All while still asleep. She’s been a heavy woman all my life, until now. Now, I could lift her with ease – if it didn’t cause her pain. I could feel her ribs just inside the skin of her back when I rubbed her. I’ve never felt her ribs before; it wasn’t possible. Ever.

I wrote once about Happy Endings, and Positive Endings.

And I still promise to write more about the latter in an upcoming post. But, it occurs to me, this is a good place to plant a seed of my thoughts about positive endings. Because, while a mother’s (or wife’s) death can seldom be termed a Happy Ending, I think it can be considered a Positive Ending. When my mom finally takes that last step – her first step into what comes next – she’ll be stepping out of the pain that’s caused the Hospice nurse to finally break out the last-resort meds. And that’s a positive things for her.

And I know Mom sees it as not only a last step, but also as that First Step. I’ve spoken to her about what she’s been dreaming during her long, recent sleeping spells. And, in a tiny country-mouse voice so unlike hers has always been, she tells me she’s been dreaming of things such as, “My first day of school, when I was a little girl.” I think that country-mouse voice might be the voice of that little girl she once was, living in what she called “The Tanglewood” of rural Colorado and Oklahoma as a child. And the dreams she tells me about are always centered around similar themes: A new beginning, one which is frightening but good.

And that, I suppose, is the little seed at the root of what I think of as a Positive Ending.

And – with humble apologies – it’s also why this post is late going up. I simply forgot.

My dad is watching her for an hour or so, while I type this up and get it posted. Then I’ll go back on duty as a strange, but ultimately very common, guardian of death.

See you in two weeks – on time, I PROMISE!