The tragedy of Greek tragedies is the protagonist often does himself in. I'm not a classicist, but I imagine those ancient plays and stories delivered messages of great moral import.

Cruise ships are international cities with crews drawn from around the world. Below decks and behind the scenes, you may find dozens of nationalities. The best become ship's officers with privileges separate and apart from the rest of the crew, privileges such as better quarters, better meals, and more freedom for shore leave. To be promoted to master– what most people call 'captain'– is a rare honor.

With Schettino facing possible murder charges, I began to ask myself if the man was criminal or merely his behavior. Whatever a judge rules, what could have led a man entrusted with a half-billion dollars of machinery and four thousand lives to act (or not act) as he did?

Early reports claimed the rocks weren't on their charts (maps to non-seamen). I find that difficult to believe as the coast of Italy must be one of the most ancient seafaring lanes in the world. Was it on their GPS? That's a different question, but the answer should be the same.

As far as the grounding, although Costa Cruises denies it authorized the course deviation for a 'salute', it appears Costa had approved this particular course in the recent past. The company and probably Lloyd's would have been aware of their position on virtually a minute-by-minute basis. In other words, a course variation probably wasn't a surprise.

When it became apparent the ship was badly holed, it appears whoever was on the bridge maneuvered the vessel into a position nearer the shore, possibly in an attempt to facilitate rescues. If true, turning a wounded 114,000 gross tonnage ship must have taken gargantuan effort. Unfortunately what the bridge knew wasn't immediately reported to passengers.

There are claims that a Moldavian blonde was present on the bridge that may have distracted the captain. Now identified as a former cruise employee, the woman says she was not on the bridge until after the accident where she assisted with translations of announcements. Sensationalism aside, no firm evidence suggests she's not telling the truth. She defends the captain who ordered her at 23:50 to evacuate to the lifeboat deck.

This is a good moment to point out what we've heard and what we think we know may be inaccurate or entirely wrong. News gathering in times of crisis is incremental and constantly correcting. Speculation– including my own– is subject to the vagaries of what is presently thought to be accurate. With that in mind…

After the impact but before the full extent was realized, Captain Schettino reportedly said, "My career is over."

When it comes to mysteries, I dislike so-called psychological cues, which depend upon the author's knowledge (or guesses) of characters' mental states. Contrarily, when it comes to true crime, I've become very interested in the psychology of criminals.

A dramatist writing of a life about to implode might stage that line as the beginning of his psychotic break. The enormity of his error appears to have unhinged the captain from reality when he was needed most.

Italian newspapers report the captain reached land and grabbed a taxi. This may suggest he was putting as much psychological distance as possible between him and the disaster. 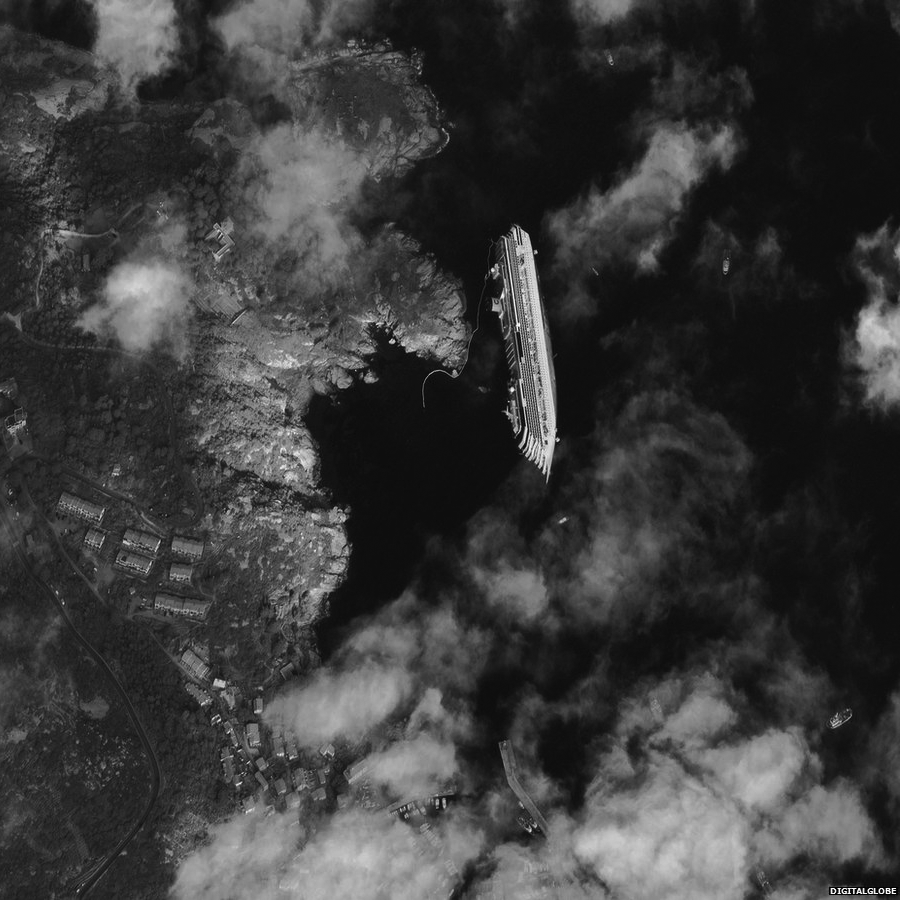 In modern times, we've taken to calling survivors heroes. To me, a real hero is someone who steps outside his (or her) self to accomplish a greater goal. It might be someone who risks their life to save a swimmer or stand on the HMS Birkenhead's deck to die while others are saved. It might be Police Chief David Dean, Staff Sergeant Dixon Hill, or Special Agent R.T. Lawton who unassumingly put their lives ahead of others. It would be a working stiff father or widowed mother who labors toward an early death to provide for their family.

But what is a coward? Military psychologists point out that successful warfare depends on fear: Most young men are so afraid of being thought a coward by their fellow man that they risk or even sacrifice their lives rather than live with that (perceived) indignity. Heroism is being afraid and doing what needs to be done anyway.

Scathing British and Italian news media express little doubt, but I'm not sure we can classify Captain Schettino a coward in the ordinary sense. Instead, he seems a man who suffered a mental breakdown. He collapsed when he was desperately needed, much like Frank Shaft in the peculiar 1970 movie, Brewster McCloud.

In the radio-telephone conversation with Coast Guard Commander Gregorio De Falco, Schettino's voice isn't of a man afraid of dying, but the echo of a man already dead.

Whatever you think of Schettino, let's turn our focus on the ship's company, Costa. How was a man allowed to rise to the peak of his profession with such a debilitating and disastrous flaw?

Modern police departments in large cities screen potential police officers for psychological stability, seeking men and women who will protect and serve rather than seek petty power, thrills, and self-aggrandizement. Besides drug-screening, shouldn't those in charge of transporting hundreds and especially thousands of lives be no less tested?

Weigh in with your opinion.
Posted by Leigh Lundin at 00:01