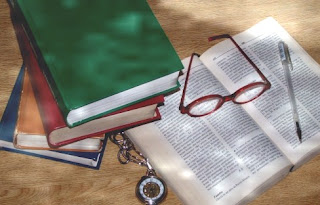 All Gaul may have been divided into three parts, as any beginning Latin student knows, but as far as I am concerned, all writers are divided into two groups - smart writers and stupid writers. Alas, I am firmly, and I might add unrepentantly, in the latter group at least when writing fiction. Even mystery fiction.

We all know the smart writers. They plan ahead. They have file cards of characters' personality features, elaborate back stories, and flow charts. Although it may be apocryphal, I rather like the story about Agatha Christie lying in her long British bathtub eating apples, until, the top of the tub lined with cores, she had worked out another of her fiendishly complex plots. That's my idea of a smart writer, one who leaves nothing to chance and has a clear map of where the story is going and who's going to do what to whom.

I find this sort of planning impossible, even though I happen to live with a smart writer. My sportswriter husband was capable, in the old days when dictation was necessary, of dictating a sports story, complete with all punctuation, from a few notes in his reporter's book. I found this astonishing, given my own troubles even with pen, paper, and typewriter. His was a hard act to follow, and perhaps you can understand why I didn't start writing until I was in my thirties.

And then, despite his good example, I turned out to be a thoroughly stupid writer. I get an idea, and because at least the beginnings of beginnings are easy, I plunge in. A character whispers in my ear, and I write down what he or she says. They tend to be obsessives with homicide in mind, although I get a few nice folk who are shocked at evil and want to set the world to rights.

The first few pages go swimmingly. There is really nothing better than starting a story (or a novel) with a flourish. How clever one feels, how creative. But then comes a difficulty, The Plot. While a smart writer would have looked into this little detail early on, the stupid writer trusts to the beneficence of the Muse, who, like all divas and goddesses, has her off days. Story comes to a halt. Writer goes for a walk in winter, a swim in summer, a sleep in the evening. And hopes.

But the Providence, as the Scots used to say, that looks after bairns and drunkards, has a soft spot for stupid writers. Gradually the story unfolds. And this is good, this is interesting. Every morning the stupid writer gets up with a little more material and she has to write if she is going to discover how the story comes out.
Forget all the writerly delays, the websites to check out, the email to answer - how modern technology has expanded the pencil sharpening and paper straightening of yesteryear. But if I want the end of the story, I have to get to work.
I find this salutary, though it may not be the case with every stupid writer. But I really aspired to be a reader, not a writer, and I must confess that if I knew the whole plot, the victim, the murderer, the exact placement of the crucial chase, the romantic moment, etc, etc, I would never sit down at the computer.
I find such smart certainty boring in the nth degree, while discovery is interesting and gets the juices going. I like to be surprised by everything from a character's sexual orientation to the identity of the killer, though I must admit that I left the latter very long in The Lost Diaries of Iris Weed. I reached 260 pages and was still dithering between two plausible candidates, but at least my work day wasn't boring.
Of course, there are disadvantages to being a stupid writer. Certain classic forms of the mystery are a closed book as far as I am concerned. Even thinking about a locked room puzzle gives me a headache and anything involving railroad or train schedules or precise timing is out of the question. Who can think that far ahead?
Plots can take a long time to resolve, too. I started a story called The Great Choreographer years ago and it only fell into shape earlier this spring. I have a suitcase full of money (strictly literary, of course) that offers all sorts of possibilities but has not yet found a good home. A story that I just finished considered two different victims and a couple of different murderous operandi before it reached its final form. This is not efficient.
Still, stupid writing has its advantages. Characters that develop as they go along are, I think, less liable to be easy stereotypes, and if plots take a while to develop, they sometimes provide nice surprises along the lines of 'I didn't think he'd ever do that!'
In any case, I suspect one writes as one must. And if one writes to know what one is thinking, then one always has a good strong motive to get back to the writing desk.
Posted by Janice Law at 00:01

I'm with you, Janice, and for very much the same reasons. You may be comforted, as I was, to hear that Dame Agatha herself admitted to going back over the manuscript and popping in the crucial clues later.

Janice, I have to admit that most of my stories start with a scene that insists on being written, even if the story rests up to a couple of years before reaching completion because the rest of the story is not in mind. They often stay that way until an AH HA moment.

I guess there are structured writers and organic writers. I'm somewhere in between.

Dick Stodghill was able to plunk down a story without a lot of planning or rewriting. If I remember right, I think James Ritchie said he worked out stories without a lot of forethought and planning.

I'm not nearly as prolific, but I have to have in mind some sort of path from beginning to end before I write. It may change and visit different hills and dales, but the compass is there. By the time I start to write, I've played the movie in my head dozens or a hundred times.

"Outlining" discussions are always interesting. While I admire folks who can start writing without having a plan in place, I'm more like Leigh: I have to have a pretty clear picture in mind of how the story will progress, beginning to end, before I start. It usually changes a lot during the actual writing, but I have to have that basic structure before I begin.

For me, the plotting takes more time than the writing.

And I enjoy all the differing styles and stories I see here every day!

Only once have I started a story without knowing the ending and come up with one that worked. That was "Hammer and Dish," and appeared in AHMM last year. To use Leigh's term I am structured not organic.

I used to tell my students to find what works for you and stick with it, but at least to try writing every day. Whatever the method, daily work seems to help.