In a recent talk to a group of mystery writers about editing, critique, and craft (“The End Is Just the Beginning”), I ruffled a few feathers among the professional editors present by indicating that I had had some negative experiences in this aspect of getting various manuscripts into print. I salute the many excellent substantive editors who can improve a manuscript’s structure, pace, and clarity, as well as those copy editors whom authors rightly credit with making their writing clean, crisp, and grammatical. I spent fifteen years as a damn good editor myself, back in the days when you could get a decent full-time job in a publishing house shepherding a work “from manuscript to bound book.” Unfortunately, there are exceptions.

I never edited fiction, so I never had to worry about that mysterious and essential ingredient in a damn fine story (please have patience with the “damns,” I’m going somewhere with them), voice. Everybody involved in publishing novels says how important voice is, but it’s remarkable how many seem not to recognize it when they see it or can’t trust the author enough to leave it alone. In a third-person narrative, the authorial voice can be distinctive; in first person, it’s even more crucial. Some crime fiction writers are masters at varying their voice. Ruth Rendell is one: her Inspector Wexford novels sound completely different from the psychological suspense standalones she writes as Barbara Vine. Other successful and popular writers have a voice that works and that readers love, but it seems to be the only voice they have. To my ear, Robert B. Parker’s Sunny Randall sounds exactly like his Spenser.

I am both fond of and grateful to the editor who worked on my forthcoming Death Will Extend Your Vacation, third in the series featuring recovering alcoholic Bruce Kohler. My first-person protagonist is a streetwise New Yorker with a smart mouth and a not too well concealed heart of gold. He used the word “damn” half a dozen times in the course of the book in constructions analogous to the “damn good editor” and “damn fine story” above. My editor, bless her heart, is a lady, and one who knows her grammar. She added “-ed” to every “damn” that Bruce uttered. Bless her even more for not giving me a hard time when I deleted the “-ed” throughout, explaining that Bruce would never have said “a damned fine wake” or “damned insulting questions,” not to mention “damned yellow tape,” “damned boat,” or “whatever damned thing she wants to say,” not in a million years. Being a New Yorker with a smart mouth myself, neither would I. Dr. John Watson, yes. Amelia Peabody, yes. But not me and Bruce (and no, please respect my voice and don’t make that “Bruce and I”).

Luckily, I was able to persuade the editor of an earlier Bruce story not to insist on making Bruce say “not sufficiently far” for “not far enough” and “an alcoholic such as I” for “an alcoholic like me.” I can laugh about these distortions of my character’s voice when I catch them in time. What makes me nuts is when they’re inserted after I’ve signed off on the manuscript (after correcting galleys, in particular), so that I don’t discover them until I see the book in print. There were two in my last novel, Death Will Help You Leave Him, that still make me squirm in embarrassment. I’d rather attribute them to the final proofreader than to the editor who I wish had checked her work and consulted me if she wasn’t sure. She did email me when the proofreader asked if I really meant a night security guard on Wall Street to ask my characters to “state your name and who you got the apperntment with.” (“Did you mean ‘appointment’?” “No,” I write back, grinding my teeth and glad we’re not Skyping, “it’s what used to be called Brooklynese.”) Maybe the editor is simply too young. I suspect the issue was sense of humor with one I didn’t catch because she didn’t ask me. It involved a character I’d described on page 34 as follows:

Vinnie frowned. His bushy black eyebrows almost met above a massive beak of a nose. I doubted even a broad smile would make more than a centimeter of breathing room in the middle.

Much later in the book, Bruce and his sidekick Barbara are reviewing possible witnesses and suspects.

“We haven’t talked to his friend Vinnie—the nice one from the funeral,” Barbara said.
“I don’t think he was no nice,” I objected. “I didn’t like his eyebrow.” I waggled mine like Groucho Marx.

Guess what appears on page 191 of the printed book. Yep, “eyebrows.” They went and tromped on my joke.

My final example, from the same book, involves an error, also introduced in the final post-galley proofreading, that in striving for grammar makes a hash of meaning. Instead of describing it, I offer the two versions—the first as submitted and passed through several stages of editing with my approval, the second in print. Let’s see if you can spot what’s wrong. 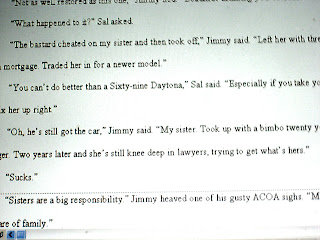 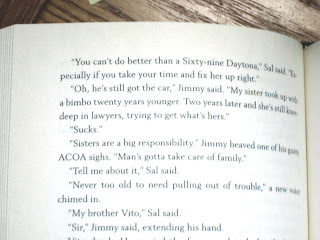