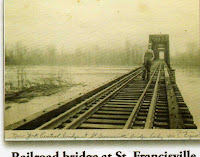 Strangely enough, I set a mystery involving a haunted bridge crime scene in small town Indiana. I thought it a damn good mystery, but the one editor (thus far) I submitted it to thought it too romantic!

Dale, are you sure you weren't in S.C.? We have some haunted bridges, but even more than that, the toll taker definitely came from around here. I enjoyed the article, but I have to go write a story about a haunted (or possessed) GPS.

A GPS with a mind of its own; scary.

GPSs are scary. We once had one on a rental car in Costa Rica. We figured it knew what it was doing when it took us off of the paved road and down a muddy track. Two miles later we labored up a hill and slammed on the brakes. We were at the top of a cliff looking down into the gully where the road had been before it washed out. Wish that one was on U Tube!

Louis made me 'LOL' for real!

Here in Kansas we have the mournful ghost on Theorosa's Bridge, and I just heard that the San Francisco Bay Bridge is supposedly haunted!

A friend and I filmed the bridge last year. It has a interesting history! It's called the Cannon Ball bridge, or to the locals as "Stangles Bridge".https://vimeo.com/266612881