All the Beautiful Girls are Murdered 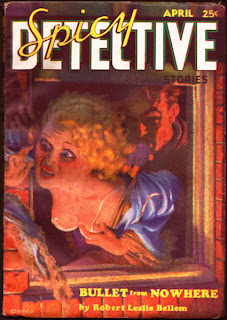 "The more things change," wrote a French journalist, "the more they stay the same." I have been thinking about Jean Baptiste Alfonse Kerr's epigram in connection with the mystery genre.
Certainly nothing much changes in the visual arts; styles and subjects and attitudes simply come in and out of fashion. There is no progress. Who would say that any drawing since has surpassed the animal sketches of the cave painters of Lascaux or that metalwork has improved on the Chinese bronzes or the sculptures of Benin? Rather work runs from one extreme to the other in size, in technique, in delicacy of sentiment.

But surely our own favorite genre has seen changes, and changes for the better? Isn't there greater variety? Isn't the level of writing far superior to the old pulps? Aren't the characters more complex? And aren't women writers, in particular, a good deal more welcome than when a reputable paperback house told my agent that they "already had their woman writer"?

All true. And yet Monsieur Kerr's cynical remark has lingered in the back of my mind, since reading one of Jo Nesbø's well written, well plotted, and frankly sadistic mysteries: Snowman. I don't want to lay all the blame on this in-many-ways excellent writer. Other novelists and recent television shows have all had a high body count of pretty young women, not to mention the rabid coverage given to the murders and disappearances of certain members of the female population. Hint: it helps to be blonde, middle class, and attractive.

No, Snowman was only the tipping point, with a variety of attractive women tortured to death in the sort of queasy-making detail once reserved for martyrdoms and high church décor. The fact that each had been adulterous reminded me of an article that was the latest thing back when I was an undergrad. Someone had gotten his (or much less probably) her scholarly bones for an essay on the "good-bad" girl.

She was, according to the author, and I'm in no position to dispute him, something new on the literary scene. A female character who was not solely defined as virgin, wife, or whore, but who could, to a modest extent, live "like a man" and still be an accepted member of society.

And yes, indeed, she has blossomed, as a glance at any of our female detectives, police investigators, or other protagonists will show. Change, indeed. But the preference for female victims, indeed for multiple female victims, has not altered. In fact, the trend away from what P.D. James referred to as "body in the library" stories has only allowed plots to move from the frivolous rococo to the blood and gore baroque.

Crimes are as ingenious as anything Agatha Christie ever cooked up, but done realistically with labeled body parts and blood spatter patterns and all the scientific grand guignol effects of forensic medicine. Add to all this the preference for young, sexy, and beautiful victims, and it doesn't take a Freud to sense a deep seated cultural pattern. Beautiful women are still threatening as well as desirable, and sexual activity for women in still problematical.

Indeed, for any female denizen of the mystery universe, my advice is to dress down and look homely, as it appears to be beauty, rather than the gang membership, seedy neighborhoods or bad company, that, in real life, puts one in harm's way.

Years ago, I was at a program where Mary Higgins Clark noted the eternal popularity of 'the woman in jeopardy' theme, and in the interests of full disclosure I am currently enjoying Wilkie Collins' The Woman in White, a classic of the type. Just the same, it is fortunate that the female characters of mystery novels have escaped from being just damsels in distress to participate in all sorts of adventures. Things do change.

But woman as victim is still very much with us. Perhaps as a reaction to the real changes in society, and even in genre fiction, one of the bastions of conservatism, female victims meet worse and gaudier fates than ever before, and, I suspect, in greater numbers.

Things change, yes, indeed, but as the wonderfully named Jean Baptiste Alfonse Kerr observed, sometimes underneath they remain the same.
Posted by Janice Law at 00:01