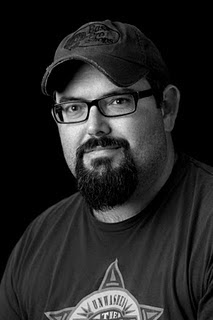 My friend, Travis Erwin, had his first-ever book signing this past weekend. The novel, The Feedstore Chronicles, is not the type of fiction he usually writes, but is a funny, can't-put-it-down, quick read. Travis describes himself as "a native Texan, a humorist, a devout carnivore unafraid to write or read a good love story."

A stereotypical-looking big ol' boy (he's past six feet tall) and refuses to eat vegetables (unless you count fried okra), Travis is a real friend when you need one. Instead of sitting in front of a computer, he looks like all he does is watch football (he is a Saints fan!). He has a beautiful wife, two rambunctious, good-looking sons and is a true enigma to me as he usually writes women's fiction.

Now if that last bit didn't stop you in your tracks, not much will. This is what I find interesting in what we're told as writers particularly about what will and what won't sell in the mystery market. When I began writing in earnest, writer's conference after writer's conference speakers directed us not to write serial killer stories as they wouldn't sell since the market was swollen with those kind of submissions. Well, serial killer stories continued to sell and show up on the bookstands, in the movies and on television on a regular basis.

We were told our characters had to be believable. A protagonist or even a sidekick that fell into the description of Travis Erwin would not be believeable to most editors. Heck, if I didn't know him so well, I'd agree.

My take on all this is that it is good writing that sells. If the story idea seems overdone -- as in the case of yet another story about teenagers and vampires -- well, that depends on the author drawing the readership in with a good tale. 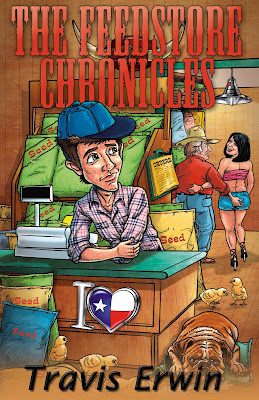 Travis said his story is based on compilations of some people he'd met through the years and experiences that actually happened when he worked as a teenager in a feedstore. I think most writers use their personal history to create characters that ring true to the reading public. If we read about a detective who shares some of our own qualities, quirks or behavios, then the story is more plausible. I also enjoy when the hero isn't quite as heroic or "proper."

When Nero Wolfe consumes breakfast in bed while wearing silk pajamas, I know he understands the fine art of dining that most rushing about in the Fast Food World has never experienced. Dining with nero Wolfe is recalling a time when everything wasn't quite so hurried and long before grunge became commonplace in eateries. Unfortunately, "dressing for dinner" is regulated for a few times during the year in my own life, so I appreciate it when a writer arranges such an occasion in his own stories.

Don't get me wrong. I'm not all fussy all the time with my characters either. Sometimes the best fun is when characters do something that wouldn't pass muster with the politically correct crowd. There's something about a tough guy in detective novels that lures me into spending time with them. I adore Mike Hammer's hardboilded persona, even when he flies into a rage. Maybe it's because no matter how much we have benefited from the feminist movement in the workplace, a girl likes to know a man would and could protect her if needed. This doesn't mean I'm not above wanting the heroine to be able to take care of herself aka Stephanie Plum or Kinsey Millhone. I don't know many who like a wimpy woman these days in literature -- or in person. I want my heroine to be able to handle the bad guys all on her own and if she saves someone else while doing it, that's even better.

Sometimes I like to settle back with a good story that will make me laugh out loud. The Feedstore Chronicles fits into this category. Who doesn't need to lean back, kick off their shoes and just enjoy a fun story once in awhile? Thanks Travis for allowing me to do just that yesterday. You made me blush just a little, and that's probably a good thing, too.
Posted by Deborah Elliott-Upton at 00:01