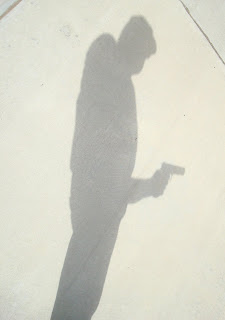 Email ThisBlogThis!Share to TwitterShare to FacebookShare to Pinterest
Labels: In the Shadows, R.T. Lawton

Nicely moody, R.T. I hope we can expect to hear some war stories in fortnights to come. Welcome to the party.

Great introduction, R.T. I grew up in love with Mike Hammer and Shell Scott. (Does anyone besides me remember Shell Scott?) Guess Velma is right about the bad boy attraction, but as a refined little old Southern lady penning cozies, I don't talk about such things. Besides, I'm not so sure that you're as much a bad boy as a damn fine writer!

BTW, I like the corn and thought I'd follow Rob's suggestion and use it to inspire a story, but Stephen King's already written Children of the Corn.

Well done, R.T. I know what you mean, about having characters stroll in from the old days.

Good to have you with us.

Great intro, R.T. I can see how it might blow your cover to have someone come up and ask for your autograph. ;)

I had the pleasure of being on a short story panel with R.T. at the St. Louis Bouchercon a few weeks back. R.T. explained there that two of his markets are biker magazines and women's magazines. This is either multi-tasking or serial-tasking. Anyway, welcome R.T. and HI!

And so do your stories. Hope you don't mind if I drink a beer while reading them, instead of Bacardi & Coke. Lol

Meanwhile, I hope to meet you in a dark alley some day—for a long talk.

Thanks, guys. This is a great group to be in.

Nice intro R.T.,...but didn't it use to be Capt. Morgan and coke? Keep the stories coming

What an interesting choice of image, RT.
Talk about armed, cocked and ready for action...

(giggling) Leave it to ABA to spot the salacious.

Velma, darlin', I was simply remarking on the outstanding calibre of the man!

I am intrigued and can't wait to hear more from you.

Hi R.T., your column read like the opening of a story. I'm hooked. Will be back for more.