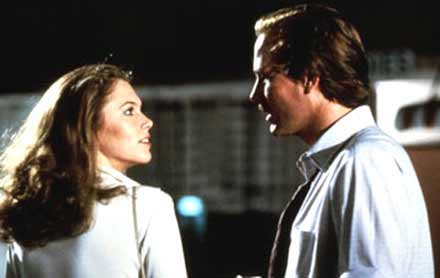 One of my favorite sub-genres is film noir. That term usually brings to mind titles out of the past like The Maltese Falcon and Double Indemnity (and Out of the Past), but I like the neo-noirs as well: Blood Simple, The Grifters, L.A. Confidential, etc. And yes, I realize I'm talking about screen fiction rather than our usual page fiction. But I can't help myself. I'm a certified, card-carrying movie maniac.

One of the best of these newer noirs, I think, is a film called Body Heat. I enjoyed it when I first saw it, years ago, and I've probably watched it half a dozen times since, on cable and tape and DVD. It always makes me long for more novels and stories and movies about conniving women, lovesick men, Chandleresque dialogue, and dark, steamy plots in which the guys always think they're in control but they're not. One of the female lead's more memorable quotes to the male lead in BH was, "You're not too smart, are you? I like that, in a man."

In my opinion, Body Heat had everything: a storyline with twists and turns throughout, unforgettable characters, a surprise ending, smart dialogue, and a sweltering Florida setting (the fictional Miranda Beach, just north of Miami) that made you think This couldn't have happened anywhere else. And the late John Barry's score was one of his best. Most of this soundtrack was different arrangements of the same tune, but it was still outstanding, and the saxophone theme in the opening scene set the mood for the whole film. Barry was one of those masters whose music could make an already good movie (Goldfinger, Somewhere in Time, Dances With Wolves) far better.

Mrs. Walker, You're Trying to Seduce Me

Like many successful films, this one featured no superstars. Before they exchanged body heat, William Hurt and Kathleen Turner weren't familiar to movie audiences -- I think he had two previous film credits and she had none. Anytime I see them now, it's hard not to picture them as Ned Racine and Matty Walker. Racine was a lazy, incompetent lawyer suffering from subtropical depression and Matty was a sexy and mysterious married woman whose temperature, she told him in that throaty voice of hers, always ran a couple of degrees high. I also picture them sweaty. And I'm not talking about just the love scenes. Everybody in Body Heat was sweating, all the time. Even at the office, or in court, or at concerts, or during meetings, or at lunch. (The same kind of thing happened in A Time to Kill. One would think nobody south of the Mason-Dixon had ever heard of air conditioning.)

A piece of trivia: BH supposedly takes place during a Florida heat wave. In reality, it was filmed during one of the coldest winters in the state's history. Constant perspiration was supplied by crew members in warm coats and gloves who hurried around with spritz bottles and sprayed water onto the already shivering, sometimes barely-dressed actors. Turner once mentioned in an interview that she often crunched and held ice cubes in her mouth until just before she had to say her lines, so her breath wouldn't make clouds in the freezing air when she spoke.

This was also one of those movies where even the supporting cast does a great job. Mickey Rourke had a punky, street-smart role that seemed to have been written especially for him; Ted Danson was surprisingly good as Hurt's tapdancing fellow lawyer, and had some of the best lines; reluctant cop J.A. Preston reminded us that at least one person in this story knew right from wrong; and Richard Crenna, best known to audiences back then as farmer Luke McCoy, was somehow believable as the rich and obnoxious (and doomed) husband of the femme fatale. By the way, one of the incriminating clues -- the fact that a pair of eyeglasses the murder victim always wore were missing from the scene of the crime -- was so clever I wound up using it myself years later, in a short mystery I sold to Woman's World. And one of the things I remember most about the film was the delicious buildup of tension in the ten minutes or so before the final action scene, which -- believe me -- ended with a BANG.

More trivia: I've heard that one of the producers -- Alan Ladd, Jr., I think -- demanded that director Lawrence Kasdan have William Hurt shave off his mustache before filming began. Ladd thought it made him look "too sleazy." Kasdan refused, and the mustache stayed put. Sleazy was exactly the look he wanted.

It's often been said that Body Heat was a remake of 1944's Double Indemnity. Maybe it was. I liked DI a lot too -- but I think BH is actually a better movie. If you enjoy crime/mystery/suspense (and I assume you do, if you're reading this blog), here's a piece of Miami advice: buy or rent Body Heat. And if you've seen it I'd like to hear your opinion.

There's one more thing I always remember anytime I think of this movie. Back in the mid-80s I made a practice of taping uncut and commercial-free movies off Showtime and Cinemax, to watch later. Since my dad, who passed away years ago, loved westerns, and since he and my mother lived too far out in the country to get cable back then, I got into the habit of occasionally taking him a six-hour videocassette of (on the same tape) two or three movies with John Wayne, Clint Eastwood, etc. Well, one day I left him a tape that contained, I think, High Noon first, Rio Bravo next, and (although I'd forgotten it was on there) the uncensored version of Body Heat. I later realized what I'd done, and even though I figured that BH would be way too risque for him or Mom, I also figured that if he found it on the tape he'd see right away that it wasn't a horse opera and wouldn't bother to watch it at all. As things turned out, a couple weeks later I was on the phone with my mother, and asked her if Dad had liked the movies on that latest tape I'd given him. She said, "He must have. I think he watched that third one five times."