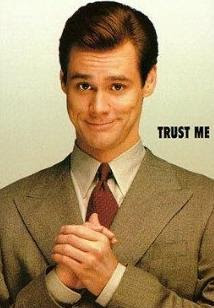 Mystery author Lawrence Block has written, in addition to many novels and short stories, several extremely useful books on the craft of writing. In one of those he mentioned the fact that "fiction is just a pack of lies." But, as Block of course knows, there's more to it than that. Successful fiction--lies though it may be--must ring true to the reader. We have to believe this is happening.
And Sometimes We Don't
For today's column I've put together a couple dozen things that I've noticed on the page and on the screen that always stretch my believability. Or, I should say, these are things that limit my ability to suspend my disbelief. I don't mind being lied to, you see--it's just that I expect the writer to make me enjoy it, and not make me think more about the lie and the liar than about the story he or she is telling me.
NOTE 1: Both Leigh Lundin and I have written about this kind of thing over the past few years, but I'm going to dive again into that same pool and see if I can come up with something new. (If I do surface with a find I've already shown you before, please forgive me and mark it down to overenthusiasm. Or maybe senility.)
Note 2: Some of these observations were stolen and paraphrased from one of the chapters in Loren Estleman's outstanding book Writing the Popular Novel. It appears that Estleman is irritated by the same kinds of mistakes I am, which makes me like him even more.
Anyhow, here are some things that I believe to be true, as opposed to what I've seen as a reader and viewer.
I'll Take Bloopers for Five Hundred, Alex . . .

1. Cartridges are loaded into a gun; bullets come out the other end. You shouldn't dig a cartridge out of a victim or load a bullet into a clip.
2. People on foot being chased by cars probably don't always run down the exact center of the road.
3. There's no such thing as a town sheriff. Sheriffs are officials of the county.
4. Not all space aliens and ancient civilizations speak perfect English.
5. Witches aren't burned. They're hanged.
6. Cars don't always burst into flame as soon as they hit something or plunge over a cliff.
7. Some hotel rooms in the Old West were not located on the second floor, overlooking the street out front.
8. Most people don't usually say things like "periodically," "frankly," "perhaps," "how dare you," or even "whom" in casual conversation. Unless maybe they're English professors, or mildly constipated.
9. When someone is shot riding a horse, he falls down. The horse shouldn't fall down too.
10. A parking space directly in front of the hero's destination is not always available.
11. Some people actually say "goodbye" when they finish phone conversations.

12. Western streets were probably not spotlessly clean. It's hard to picture Ben Cartwright with a pooperscooper.
13. Gifts aren't usually wrapped such that the tops can easily be lifted off without first unwrapping the whole thing.
14. Your P.I. hero shouldn't get knocked unconscious from a blow to the back of the head in every single chapter or episode, the way Richard Diamond did in the late 50s. That causes a concussion each time, and . . . well, you get the picture.
15. There are very few mafia hit-women. Tony Soprano & Associates held political correctness in low regard.
16. Most drivers watch the road ahead (at least occasionally) while talking with passengers.
17. Not every character in a given town attends the same church.
18. Revolvers don't use silencers, and they don't automatically eject shells. They darn sure don't eject bullets.
19. People do confess to crimes--but it doesn't often happen in the courtroom.
20. It is theoretically possible to climb all the way to the top of a chain-link fence without being shot or dragged back down.
21. Chairs in saloons shouldn't always break apart when used to hit someone over the head.
22. Some travelers actually get on their plane/bus/train before the final boarding call.

23. Starships and space stations, when they're destroyed, don't explode in a thunderous fireball. If you boldly go where no man has gone, there's no oxygen there, so there's also no sound and no fire.
24. Most gunshot wounds don't instantly kill the shootee.
The Audacity of Untruth
To quote Mr. Estleman, "Suspension of disbelief is a high-wire act, requiring plausibility on one end of the balance pole to counter the pull of audacious invention on the other." It ain't as easy as it looks.
This also applies to incorrect locations or dates, in your story or novel or screenplay. Near the end of the film version of Forrest Gump, Forrest states that his wife Jenny died on a Saturday. But I read someplace on the Internet that the date on her tombstone was March 22, 1982, which apparently was a Monday. (The guy who posted that fact mentioned that he probably needs a hobby.) And when I think of funny mistakes, I'm always reminded of a movie I saw in college called Krakatoa: East of Java. Why? Because Krakatoa was west of Java.
A Burr Under My Blazing Saddle
Rob Lopresti is always kidding me about my fondness for making lists, and he probably has a point. (Maybe I'm the one who needs a hobby.) But whether they're in a list or not, these kinds of story misfires and inaccuracies are one of my pet peeves. Be honest: Have you ever seen a movie where a bartender actually made change, or a rope was hard to cut with a knife, or the good guy's dog didn't growl at the bad guy? Surely that should happen, now and then.
Can you think of anything you find particularly annoying, when you encounter it in your reading or movie-watching?
Except lists, I mean . . .
P.S. Since Rob's column about emailed rejections/acceptances the other day, I've received two: a rejection from Woman's World and an acceptance from AHMM. In terms of the music one hears in one's head, I went from Gilbert O'Sullivan's "Alone Again, Naturally" to John Williams's "Olympic Fanfare" in a very short time. Is this a crazy business, or what?
Posted by John Floyd at 00:01

John, I find I must take isue with #8 of your observations. Frankly, you're way off base with that one! Periodically, my characters, whom I've taken the greatest care to create, might exclaim, "How dare you!" Is that so very unnatural? Wait...sorry; I'm going to have to cut this short; been having some abdominal cramping of late.

I loved this article, John; it really had me laughing. Bad guys never run down the middle of the street--they're really uncooperative that way!

You swatted several of my pet nits. I'd add that most firearms shoot slugs (except shotguns) and most revolvers don't have 'safeties' as such (not counting a hidden piece of steel called a transfer bar).

Just as we have constables, traffic officers, beat patrols, and deputies, a gendarme is a particular kind of police officer, but if you want to colloquially refer to 'the cops', you can say les flics ('lay fleeks')

I LOVE THE LISTS, ESPECIALLY THIS ONE.

Great list, John. I'd add that in real gunfights, the shots don't invariably hit all the bad guys and fail to hit the good guy. About witches: they were hanged in England and the US, but my guess is they were burned in Spain, thanks to your friendly neighborhood watch, the Inquisition. Oh, and most people don't sit bolt upright in bed when they wake up from a bad dream.

Good list and can we add detectives and PI's who operate solely on alcohol and cigarettes?

Great list. A friend of mine was lucky enough to see the proposed cover for one of his books in time to have it changed. It showed a close up of a gun being fired and the cartridge flying out of the barrel. The whole cartridge.

And by the way, during the Salem Witch Trials at least one accused witch (who refused to confess) was killed by being placed under a board which was then loaded down with rocks. His last words were "more weight."

Hey gang -- I've been on a 300-mile-round-trip booksigning today and have been out of touch--just got home. I resisted the temptation to take my iPad along.

Thanks for all the observations, and for coming up with some things I wish I'd thought of, for my list.

Liz, I sit bolt upright in bed only when I get a great story idea.

Funny, this evening I saw the SF film In Time (which I recommend) and sure enough, several times people ran down the middle of the road. One guy even managed to get himself killed doing the middle-of-the-road thing.

Leigh, I guess when the director already has the cameras set up on the road, he doesn't want the actors running off into the trees or a side street just to get away from the pursuers. Whoever said plots have to be logical . . . ?

P.S. I recommend not watching the movie preview/trailer for In Time… it gives too much away.

I will definitely check out the movie (but not the trailer!!). Many thanks.

Good one, John. I sometimes collect lists because they may provide story ideas later.
Let us know when your AHMM story is coming out.

Will do, R.T. Thanks for the kind words.

Thanks! I took notes!

Well, the biggest blooper is one you made. You called a magazine a "clip". A clip is not the same thing as a magazine, and the two words are not interchangeable. A clip is what loads ammunition into a magazine. Calling a magazine a clip should be reserved for cheap novels and B movies. Anyone who knows much at all about guns knows the difference.

You can see the difference here: http://www.youtube.com/watch?v=AF21sihEgOU

And while you don't pull cartridges from a corpse (Unless the poor fellow choked to death trying to swallow a few, you absolutely do load bullets into a gun. Just because the entire thing is called a cartridge means nothing. Part of that cartridge is the bullet, and you load that part along with everything else. It's not only correct saying you load bullets into a gun, in fifty of spending time with experts, and being one myself, I can't remember anyone ever saying they loaded cartridges into a weapon.

Like "whom", the word cartridges is used by writers, and by the slightly constipated. Real weapons experts seldom, if ever, use it outside of writing.

They just say "bullets", "rounds", "ammunition", or specify the type being loaded.

As for fireballs in space, of course you can often see one. It takes very little oxygen to sustain a fireball, and any spaceship or space station that supports human life also has enough oxygen within to make a very nice fireball. It would burn out quickly, but there would be one.

You might even hear the explosion over the ship's radio, which is the justification often used in movies.

And many chemicals, explosives, and materials burn very, very well without an outside oxygen source. Coincidentally, gunpowder, particularly in a cartridge, is one of them. One of the silliest scenes I've ever watched in a movie was about the crew of a spaceship wanted to fire a gun in a vacuum, so they pumped oxygen into the area to make the gun fire. That's nonsense.

A gun fires very well in a vacuum because the gunpowder has more than enough internal oxygen, so doesn't need an outside source. This is also how and why you can fire a gun under water.

The venerable old 1911 is one of those strong enough to withstand the pressure, and still has enough power to kill out to about eighteen inches.

Thanks, James, for the comment, and for the corrections. I bloop fairly often, so any bloopers made here are not my first.

I will watch and listen closely for space explosions in the future, but I will also continue to happily refer to magazines as clips.