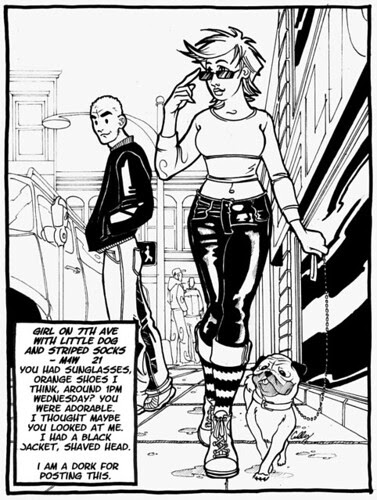 You’ve probably seen the ads in weekly newspapers or certain websites. They generally go something like this:

Where: Joe’s Grill. When: Last Tuesday night. You: The beautiful woman in a red dress. Me: The guy being punched by his girlfriend for looking at beautiful women. I was bleeding too hard to give you my phone number. Want to meet?

This is a story about a missed connection. (But I swear I was nowhere near Joe’s Grill that night.) Bear with me. We will get to crime fiction eventually.

They want your blood

A few years ago my siblings and I were asked to participate in a national medical survey. The object was to determine whether certain conditions had a genetic link.

And we were happy to do so. It was no biggy: just a blood draw. In fact, the longest part of the procedure was reading the list of cautions and warnings that the researchers provided in the name of fully informing their human subjects. Mostly they wanted to tell us not to expect instant cures to come out of the study.

But one paragraph fascinated me. I don’t recall the exact language bu it amounted to this: If it turns out you aren’t related to the people you think are your family, we aren’t going to tell you.

I was most amused that they found it necessary to plan for this circumstance. Very logical, really.

So how does this relate to missed connections? Or crime fiction?

What’s bred in the blood comes out in the bone

Doug Allyn has a story in the November issue of Ellery Queen’s Mystery Magazine, and a fine story it is. “Bloodline” is about a fourth generation banker who participates in a study much like the one I was involved in, but the doctor in charge did not follow the rule above. In fact, he took gleeful pleasure in telling the protagonist that he was not the biological son of his wealthy (legal) father.

(By the way, this is the premise of the story, so I am not revealing salient plot points.)

I had mixed feelings as I read the story. Yes, it was a very enjoyable read, but I had the maddening sense of – you guessed it – Missed Connections. Why hadn’t I seen that paragraph of legalese as a story idea?

Not that I would have come up with the same story as Allyn. Maybe I wouldn’t have thought of any story at all. What bugged me was that it never even occurred to me to LOOK for a story idea there.

When people ask where I get my ideas I usually reply with a parable:

Once a traveler was walking along the riverbank. He saw a man standing by the river with a pole in his hand, a baited hook on a line and the line in the water. The traveler noticed a creel full of trout.

We all live by that river. Some of us have developed our equipment and some of us haven’t. I think mine is in pretty good condition.

But dagnabit, that was a big juicy fish that swam by and I never even knew it was there. Makes me wonder if the next Harry Potter idea was right in front of me today while I was trying to decide between a chocolate chip cookie or a snickerdoodle.

If it was and someone else grabbed it I hope they don’t tell me where they got their idea.
Posted by Robert Lopresti at 00:01

Dangnabit, that was a big juicy article idea and I let it swim past me. What a great observation, Rob.

Ouch! I know the feeling.

A thought-provoking column, Rob. I recently decided to write a short story every day, based on something I'd seen or heard the previous day. I lasted five days, then went back to work on the first book in the new series. I think I'll revise my plan and look each day for an event or idea for the new series. Thanks for inspiring me!

Love the parable, Rob. Planning to steal it. :)

I have long suspected that the waning of whodunits is directly attributable to the fact that a lot of the good "twist" endings have already been used!

Most by Bobby himself.