Two weeks ago John Floyd wrote about which authors he had appeared in magazines with.  I said I had been thinking about writing on the same subject, and -- hey presto!  -- I have done so.  My predictive abilities amaze even me.

I was not surprised to find out that the author I have shared the most mags with is Michael Mallory.  We have graced no less than 6 issues together (and he sometimes had more than one story in them, the glutton)..  This is because we used to share a mutual admiration club with Margo Powers, the editor/publisher of Murderous Intent Mystery Magazine, and were found there, it seems, more often than not.  Michael used to write wonderful stories narrated by Dr. Watson's second wife.

Next, with 5 stories is Toni L.P. Kelner. We have shared pages in MIMM, Alfred Hitchcock's, and Ellery Queen's  -  the latter being surprising, since I have only made it there once.

I have shared the shelf with Ron Goulart 4 times.  I consider than an honor because I remember his hilarious stories in Twilight Zone Magazine,  where I got some close-but-no-cigars.  I fell in love with a story of his called "Groucho," which was about a Hollywood mover-and-shaker who was reincarnated as a cat.

Dick Stodghill was in three issues with me, including the very first issue I ever appeared in, in the late not-very-lamented Mike Shayne Mystery Magazine.  Some of you may remember Dick as one of our most faithful and interesting commentors. on Criminal Brief.

But let me end with my favorite story on the subject.  Not long after I started getting published I attended one of the Edgar Symposiums run by the Mystery Writers of America.  A woman saw my name tag and introduced herself.  It turned out we had shared the pages of an obscure magazine called P.I.

S.J. Rozan and I have been friends ever since.  Of course, not all writers have equally successful careers and I am sorry to report that she has not had quite as many short stories published as I have.  I hope her string of bestselling novels is some comfort to her.

And wishing you the same.
Posted by Robert Lopresti at 00:09 9 comments

By Fran Rizer
Way back when I did my undergraduate work at the University of South Carolina, I double-majored in English Literature and Journalism. The only grade less than an A I ever made was the exam on writing obituaries. There was an exact format that had to be followed. Unfortunately, I'd partied too hearty the night before the class and slept in. Not only did I not know how to write an obituary, I didn't even know we had a test the following class. I received an F and a lecture on missing the prof's lecture.
Times have changed and our State Newspaper now will print ANYTHING the family gives the mortuary. Of course, now the family has to pay by the word for the printed obituary. I've written quite a few, but I'd still rather write anything than an obit. Today's topic is a death, but I'm not going to write it as such.
This morning, I received an e-mail from Darlene Poier, editor and publisher of Canadian magazine, Pages of Stories. Subject line reads, "Goodbye from Pages of Stories." Problems forced the Poiers to take a brief hiatus to reorganize. Research in how to promote the magazine convinced them that they could not continue. Therefore, Pages of Stories ends. 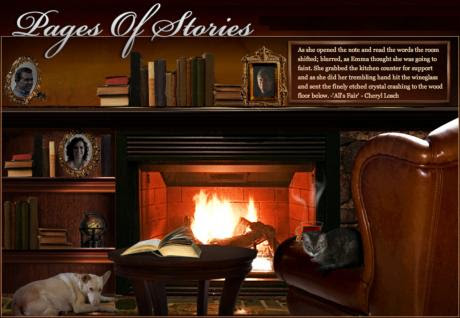 I learned of Pages of Stories through Criminal Brief and won a subscription through a contest. That led to my submitting a story, which led to my story appearing in the same Summer, 2011 issue as stories by John Floyd and Leigh Lundin. I was honored to be in such fine company.
Darlene started the magazine intending to publish the best stories available, and she states, "I believe that this magazine did accomplish the goal of having the highest quality stories available, making for an enjoyable read for everyone." She wrote that subscriptions never rose to the level necessary to establish a foundation sufficient for production and promotion.
Last Friday, comments on John's blog led to a discussion of how few fiction magazines are left and how hard it is to obtain them. Perhaps we need to reconsider subscriptions. John, what I do to avoid the crowding situation is donate to nursing homes and senior citizens groups. But then, I have to subscribe because not a single bookstore of newsstand in Columbia, SC, stocks AHMM or EQMM.
The web site for Pages of Stories is still up but will soon come down. The war story project Lest We Forget is available in both hard and soft copy. Communicate with Darlene through the website or at www.pagesofstories.com.
I promised I wouldn't write this as an obituary, and I'm not. Instead, it is an eulogy and a question about our legacy and the inheritance we leave. Certainly the market is depressed, but what do we leave those who come after?

I'm going to miss Darlene and Pages of Stories.
Posted by Fran Rizer at 00:01 9 comments