Before we begin I have a very important announcement: We here at SleuthSayers love our readers, so we are going to offer a special treat. We authors are going to give away copies of our books (or similar goodies), one a month, starting now, and continuing until we run out of gifts or readers. This month's prize will be a paperback edition of my book, "The Thirteenth Child", signed by yours truly. All you have to do is email us at Velma(at)secretary(dot)net by midnight, November 3. The winner will be selected at random. Please put the word "Contest" in the subject line. Best of luck...and now back to our regularly scheduled blog.


Halloween has always been one of my favorite days on the calendar. It falls during one of the most beautiful times of the year, involves costumes, the chance of being frightened (and hopefully nothing more), running around at night, and at the end, actual rewards--candy! What's not to like? Of course, some of those enticements are more meaningful when you're a kid, but I guess the spooky charm of it all has never lost its appeal to me--or my wife, for that matter.

When I was a boy growing up in Georgia, I thought it was the next best thing to Christmas. During that long-ago time and in that far-away place, we kids were allowed to pretty much roam at will for blocks in every direction during the daylight hours. It was generally understood that grown-ups would keep an eye on you wherever you went, and certainly report to your parents any code-of-conduct violations they observed. At least this was what we believed and trusted in at the time. But even with this almost unfettered freedom, we seldom ventured beyond our own neighborhood. I think we had a "Beyond this be dragons," philosophy as children. Halloween night, however, all this changed, if only for a few brief hours. 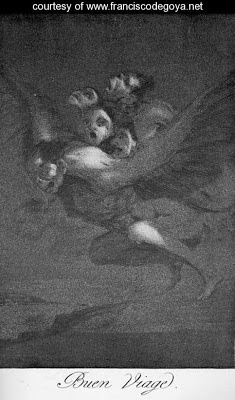 Donning masks, that today would be laughably simple and unfrightening, we gathered into packs with our friends, snatched paper grocery sacks, or old pillow cases, from our moms' hands, and tore off into the darkness--even if it fell on a school night! Besides being a genuinely scary sensation, this roaming through the night, it was also a race with consequences. Every other kid in the known world was trying to get the last of the candy at the next house along your way! An intolerable possibility! When we would begin our scavenging, porch lights winked like a vast constellation across the city, but within a scant few hours, those same lights began to vanish, one by one, returning the world to its previous drab and unmagical state--they had run out of candy. Intolerable, indeed.

This inevitable consequence would force us to race from house-to-house, and eventually to leave our neighborhood for parts unknown. There was no need to discuss our direction of travel, as only one direction made true sense--east. To go west was to cross Hamilton Road and venture into a vast shanty town of mill-workers and their very tough kids. As these same kids were running roughshod over our own neighborhood, their sheer numbers and determination an unstoppable force, Gothic in both number and consequence--we flew east ahead of them. A neighborhood called "Winchester" was our bountiful target. I think they viewed us kids from "Lester's Meadows" in the same fearful light we did the trolls from "Bealwood"--Beal as in Beelzebub. But no matter, we were swift and artful, and returned to our homes laden with booty!

Dumping all the goodies onto the floor we would sort through the takings, setting aside treats that did not suit our particular palate. Then, using these as barter, we would engage in furious trading sessions--you would have thought we were young Wall Street brokers--hard-nosed and keenly avaricious. It was a great night!

This was all vastly different from the true origins of All Hallows, or its earlier incarnation of Samhain. Samhain was an observance by the ancient Celts of Gaul and Britain commemorating the loss of the sun with the coming winter and celebrating its eventual return in the spring. Perhaps because of that descending darkness, this was also the night that the dead returned to walk among the living. Encounters with the dead were not generally considered a good thing, as it could signify that your own time amongst the living was at an end. As if this was not a frightening enough situation, the Celtic priests (Druids as they were called), made this a night of human sacrifice, piling prisoners-of war, criminals, and other undesirables, into a wicker framework designed to resemble a giant man, and setting them ablaze. By the light of this titanic, and gruesome, torch, everyone feasted and danced the night away. I often suspected the kids from Bealwood had similar plans for me and my friends. Even Julius Caesar, not known as a squeamish man, was affronted by this practice, which apparently he witnessed during his invasion of Britain in 54 BC. In a righteous fury he had thousands put to the sword--much better; more civilized certainly. When one pines for "the good old days" one should be specific...and careful.

With the coming of Christianity, and the adoption of the cross by various Irish, Scottish, and British (not to be confused with English) kings, things began to change--but not quickly. Old habits die hard as they say, and the Celtic belief that Halloween was a night when the spirits of the dead walked amongst the living, just would not die a natural death. Not wishing to alienate these new Christians, the Holy Roman Church did something smart--they just co-opted the occasion. Making the day after Samhain a church feast (Holy Day) to celebrate the unknown saints--All Saints (as opposed to a specific saint), the evening prior became All Hallows Eve, or in the vernacular of the day, Hallow e'en.

It only took a millennium or so, for the terror of Samhain to be tamed into the costumed trick-or-treating we know today. Treats were often left to propitiate wandering spirits, as well as ancient gods and monsters, and certainly my friends and I were often labeled little monsters even when out of costume. Failure to play by the appropriate rules would lead to tricks being practiced on the un-believers. A just arrangement, in my opinion. Costumes of demons and ghosts incorporated some of the darker elements of the earlier pagan practice; being also useful in avoiding identification as regards the aforementioned tricks, and therefore practical, as well.

So, from dark and bloody beginnings, children now cavort through the evening in the service of their sweet-tooth, their costumes giving them a sense of anonymity, and therefore, freedom, even as their parents trail mere paces behind ( a concession to a different, and once again, darker time). The night is filled with laughter, and not screams, or at least not ones as fearful as Caesar must have heard issuing from within the wicker man. The dark side is held at bay, even on the eve of its commemoration, and I, for one, am not sorry. Happy Halloween!
Posted by David Dean at 00:01 8 comments