Everybody has too many Christmas parties and get-togethers in December, so the Connecticut MWA members threw a procrastinator's bash on January 11 in Middletown. Middletown is, of course, in the middle of the State, home of Wesleyan University and several fine restaurants, so we gathered at Esca, three blocks from the college and on a main intersection.

Chris Knopf and Jill Fletcher, who organized the event, suggested that in addition to the usual gift grab bag, drinks and meals and catching up on everyone's accomplishments for the year, people write a 200-word story on the theme of Santa Noir to share with their accomplices. Alas, loud hungry patrons mobbed the eatery on a Saturday evening, so we abandoned the readings. Some of our recent predictions on this blog have made the upcoming year look a little bleak, and I agree, so the stories seemed like a definite counterbalance.

Here are four of them.

Santa Claus and Me by Mark L. Dressler

I stared at that red Santa Claus outfit for several minutes. The lifeless man inside sent an eerie feeling through me matching the bitter night chill. I knew I'd never see that costume again.

Year after year, it was a never-ending journey, make-believe to many, but I knew differently. This was the night it would finally end. No more toys, no more nagging kids, no more workshops with elves, no more agonizing trips to the ends of each continent...and no more reindeer slaves.

I took another glance at that red uniform before walking away. I had no idea who that homeless man inside it was, but his clothes fit me perfectly. It was time for me to find a new home because I couldn't go back to the North Pole. I'd cleanse myself of this long white beard in the morning and become a free man. My name would no longer be Kris Kringle.

Recently discharged marine Luis Martinez, high bar champion of the 43rd Street playground, sits alone on the broad windowsill across from the end of the bar nursing his fourth beer. He looks in need of cheering up. It's possible, no, it's certain, that the only advantage of having left his right leg back in Vietnam is that he now never has to pay for a drink, ever, in any of the watering holes up and down the length of Greenpoint Avenue.

Burly cop Georgie Corrigan bursts through the barroom door, dressed as Santa Claus. "Ho, ho, ho. Merry Christmas!" Santa Georgie moves along the bar clapping people hard on the back, and turns over to a couple of friends the bags of pot he took from a kid on his beat in Brooklyn a few hours ago. As he makes his way along the bar, he notices his old friend Luis, glassy eyed, staring off into space. Georgie sits down next to him and uses a burly arm to clamp him in a headlock. "Semper Fi, Jarhead!" and then, "Get up off your ass and onto those crutches. We're going outside to smoke a joint. Santa wants to see you smile."

Santa By a Nose by Michael D. Beil

Christmas Eve at the Subway Inn, a dive bar that's a dead possum's throw from Bloomingdale's. Beside me is a bag with Isotoner gloves and a faux-cashmere scarf for the old lady. Three stools down is a schmoe in a Santa suit. The line of dead soldiers on the bar tells me the poor bastard is trying to forget how many brats had pissed their pants on his lap. For about a second, I consider sending a drink his way. But when he lifts his head, I realize he's the SOB I've been chasing for a week about a B&E in a bike shop on Second Avenue. No doubt about it. Eight million people in New York, but there's only one nose like that one. Fill it full of nickels and he could buy everybody in the place a drink.

I'm reaching into my coat pocket for my shield when a blast of frigid air blows in a tired dame in a coat that probably looked good during the Clinton administration, with three kiddies in tow.

I throw a twenty on the bar and nod to the bartender on the way out.

(Michael Beil was an Edgar finalist for Best Children's Novel for the first of five books in the Red Blazer Girls series.) 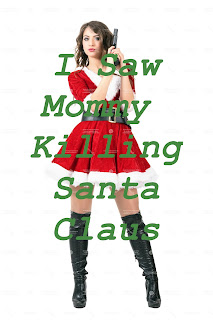 Detective Angel Noelle looked at the body, a fat man with a white beard and a red suit, underneath the mistletoe. Wrapped presents, grungy with fingerprint powder, lay under the tree.

"Your first, Noelle?" That was Detective Shepherd.

"We're waiting on fingerprints, but we've got a suspect and a witness."

Noelle turned to the woman in the green robe, the slit revealing black fishnets--previously hung by the chimney with care--and four-inch stilettos.

"I'm a dancer," she said. "All my son wanted for Christmas was his two front teeth..."

The small boy peeking from the stairs nodded.

"But instead, he brought..." The prancing vixen buried her face in her hands. "He deserved it..."

Noelle turned to the tech filling out the evidence label.  "What was the weapon?"

"Yeah, been re-gifted so many times it's hard as a Jersey barrier. The label on the can says, 'Do not sell after 2004.'"

Noelle looked at the body, deep in dreamless sleep.

"The contusions fit?" The open fire crackled in the fireplace.

Outside, the black and whites rolled by.