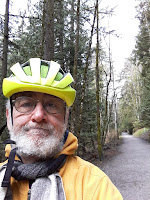 I am working on a story set in  Bellingham, Washington, the City of Subdued Excitement, where I have lived for almost exactly half my life.  It is the second story I have located here.

The main character is a bicyclist who literally tumbles over a corpse, but a couple of police detectives make an appearance.  I realized I could borrow them from my first story set here.  It was a pleasure to renew the acquaintance.

But that got me thinking about another story of mine that is currently wafting through the electrons in search of a good home.  I originally wrote it about my lovely city but it was so... bleak... that I couldn't bear to leave it here.  So I fictionalized the place.

Bellingham is named for Sir William Bellingham, who helped organize George Vancouver's expedition to explore our part of the world in 1792.  (If you want to get technical, Vancouver named Bellingham Bay and the city took its name from that body of water.)

So I transferred my story to the non-existent city of Broughton, named after another William, in this case one who was actually on Vancouver's famous trip.  There are other parallels: Cornwall Avenue has become Devon Avenue, both being locations in southwest England.

Not that I expect my neighbors to recognize all these connections, necessarily.  But it was fun making them.

All of which brings us, at last, to the main topic: When and why does a writer fictionalize a place?

I gave one reason: names changed to protect the innocent, so to speak.  Another is to give the writer more liberty with the truth.  Jo Dereske, who also lives in Bellingham, set her Miss Zukas mysteries in the fictional Bellehaven so she could eliminate a mall and move a ferry.

A third and related reason is to save the author hours of research about the real place.  James Powell explained why he set so many of his stories in a place that resembles but is not Monaco: "Inventing San Sebastiano freed me from the tyranny of facts.  If you go into a large public library you will see a pale crowd of men and women researching books or articles they plan to publish or preparing for courses they intend to teach.  And these are all noble things.  But there are other researchers there, an even paler crew who accumulate knowledge so they can write letters to the editors of mystery magazines peppered with words like 'egregious' and 'invincibly ignorant.' 'Dear Editor,' they write, 'in your issue of November last I was astonished to find a character in a James Powell story releasing the safety-catch of an 1864 sleeve Derringer, model 302, a.k.a. 'the Elbow Smasher.'  I think not.  That particular model Derringer did not come with a safety-catch until January of 1865.'" 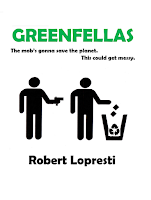 It was that sort of thing that caused me to set a crucial picnic scene in my novel Greenfellas in a fictional park.  I hadn't visited the real one in decades and didn't want to screw up.  One reader asked why I had changed the name of the park, which she said I had otherwise described perfectly?  The moral of that story I leave to the reader.

What do you think of fictionalized places as a setting?