I saw Hal Holbrook do Mark Twain Tonight when I’d just turned fourteen, and it was life-changing.  Holbrook himself was thirty-four, playing Twain in his seventies.

The venue was Sanders Theater, at Harvard, inside Memorial Hall.  I don’t know if Twain actually appeared there, but the building was completed in 1875, so it’s possible.  Sanders has terrific acoustics, and Holbrook took the stage unamplified, as Twain may well have. 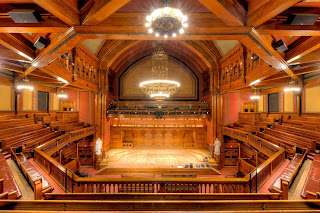 I caught the show twice, a matinee performance and then again the next day.  I had to go back and see it a second time; it was that jaw-dropping.  Nor did Holbrook repeat the shows word-for-word.  He had a lot of material, and he shifted gears, depending on the audience reaction, the time of day, or how the weather was.  He played the room.

The real game-changer came in the second act.  He screwed his voice up a notch, higher-pitched, an old guy pretending to be a boy speaking, for the opening of Huckleberry Finn.

“You don’t know about me without you have read a book by the name of The Adventures of Tom Sawyer; but that ain’t no matter.  That book was made by Mr. Mark Twain, and he told the truth, mainly.”  This is characteristic of Twain, and of Holbrook’s canny delivery, a slight pause or stutter, before the punchline.  Mainly.  What’s also characteristic of Twain is the reversal of expectation, which can be a matter of comic timing, or the sudden chill of menace.  The first act of Mark Twain Tonight is full of laughs.  It’s a kind of bait-and-switch.  Holbrook moves the goalposts when he reads Huck’s story.  He slips in the knife, with the inexorable slide from the burlesque of Stephen Dowling Bots to the murdered Grangerfords.

This is part of the skill of the novel, the juxtaposition of horror and farce, but it’s very clear choice on Holbrook’s part to give us the Grangerford feud, or the lynch mob, or the time Huck outwits the bounty hunters by telling them Jim – hidden in the tent – is his Pa, infected with smallpox.  It balances on the edge of darkness, the consequences if his deception is found out, the entire narrative in fact a feverish pretense, an infection boiling just below the skin, a dose of sulphur with the molasses.

Holbrook put out two LP’s, performing live, and the 1967 TV show.  All well worth seeking out.

I think, however, that the immediate effect of my seeing Mark Twain Tonight in person wasn’t astonishment with Holbrook’s skill at transforming himself (astonishing as it was), or an appreciation of the writer as celebrity (Twain following in Dickens’ footsteps), but the experience of invention.  Holbrook becomes Twain, yes, but Twain becomes Twain, before your eyes.  You see him in the act of picking and choosing, deciding what to reveal, and what to hold back.  I suddenly realized that it wasn’t accidental, and Twain was actually the author of these engines, that he could invent these outcomes, he could turn these corners, he could lift the edge of the curtain, and in so doing, he could shape my emotions, terror, or elation, or wonder.  In other words, he was doing it on purpose.

This was a revelation.  It demonstrated to me that writing was conscious, that you laid down a beat.  It had somehow not occurred to me.  This is one of those startling things, the before and after.  Before, you didn’t get it.  After, you can’t imagine how you didn’t always know, the knowledge foundational, necessary, built into your muscle memory.

This is the strength and power of the story-teller.  Given a place by the fire, blind Homer tells again the tale of the heroes on the windy plain of Troy.  His listeners lean in.  A beginning, a middle, and an end.  Or not quite an end, but a tease, the promise of tales yet to be told.  The poet sings for his supper; he needs to give good weight. 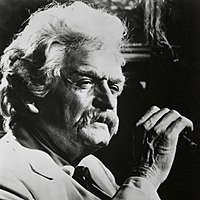