The Day I Hung Up My Fedora Forever


by Joseph D'Agnese
I was about 10 years old when I got my first business cards. I “printed” them up myself, laboriously writing them in longhand with pen on index cards I swiped from my Dad.

D’AGNESE DETECTIVE AGENCY, the first line read. After that came our home address in Jersey. There ended my originality. The rest of the copy is tattooed in the brain of anyone who loved mysteries as a kid: 25 cents per case, plus expenses. No case too small.

I don’t know how many of these cards I wrote up. But it was a lot, because I remember discarding a few of my Dad’s pens along the way. Some cards started in black or blue ink, but finished in red. Then I pressed my younger brothers into service. We dropped those cards into every home mailbox or mail slot in the neighborhood.

I set up my office in the garage. We always had some folding chairs tucked away in a closet; I appropriated a couple for myself and my operatives. My Dad had a very large metal gasoline can in the garage—also perfect, also fortuitous—which became my desk of sorts.

I don’t know how long I had to wait for my first case, but when it materialized, it came in the form of two big kids. I can’t be precise about their ages, or mine, because childhood memories are forever and ageless. One of the kids was the friend of our older, big-kid neighbor, Clint.

As soon as his lips closed, a shocking thought passed through my head: What the hell was I doing? I had no freaking idea how to be a detective. How does one even begin to track a stolen bike?

“Do you have any suspects?” I said.

My client didn’t get a chance to respond, because at this point one of my brothers insisted on seeing the color of the fellow’s money. “It’s 25 cents!” 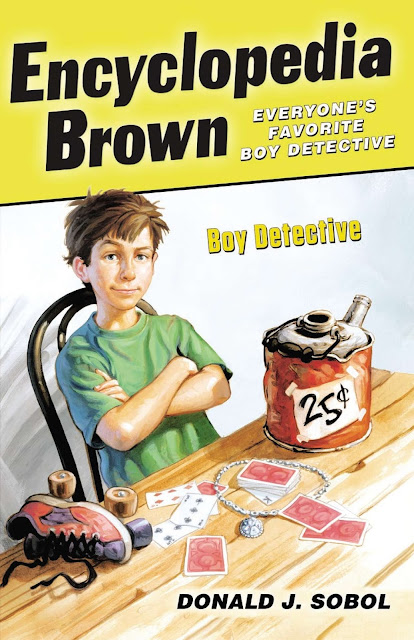 Book #1 in the Series. Note the gas can!
The books in question, as you’ve no doubt guessed, were the Encyclopedia Brown mysteries that were written so wonderfully by a man named Donald J. Sobol over the course of 49 years.

Sobol wrote other books in his lifetime, but the Brown mysteries—about Leroy Brown, a kid sleuth who solved cases out of his garage in a small fictional town in Florida—will always be his claim to fame. The Brown books each contained about 10 short mysteries.

I hate dreaming up clues for the stories I write today. I’m terrible at it. Sobol’s genius was boiling every single case down to some abstruse factoid that revealed which person in the story was a liar. Things like which way water flowed in the Amazon basin, or the fact that dogs can’t see color, or the fact that fire never burns downward, only up. (I just made these up. They are not Sobol-approved.) No one in the stories, not even grown-ups, knew this kind of trivia, but Encyclopedia always did. That’s how he always nabbed the perp.

I never did read all the Brown books. My childhood ended before Sobol finished crafting them. But many years later, I had the chance to read the first volume of his Two-Minute Mysteries series, which were wickedly short newspaper puzzlers not unlike the ones in Woman’s World magazine today. Sobol published three books culled from this one syndicated mystery column, which he began writing for newspapers in 1959.

But here’s what blew my mind: In the same way that Raymond Chandler “cannibalized” his short stories and their plots in later novels, or the way Ellery Queen repurposed their old radio scripts for later books, Sobol clearly tapped some of his old Dr. Haledjian newspaper shorts for later Encyclopedia Brown material.

Because clues are just that precious.

None of this helped me, by the way, back in the 1970s. The Case of the Purloined Bike didn’t have a single critical clue to guide me. (I wouldn’t have spotted it if it had.) As I recall, the case fell apart when the client threatened to steal our bikes, mine and my brothers. Isn’t that just like a big kid?!

Terrified, I fled my newly hatched office for the safety of my upstairs bedroom, bolting the door. If the world was not going to challenge my ratiocinative abilities, I would not be a party to its madness. 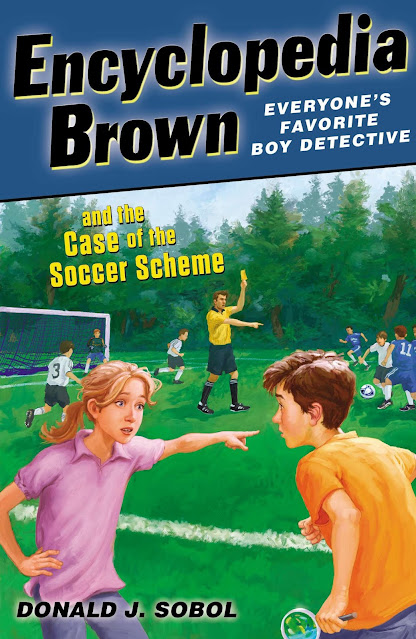 Book #29 —the last in the series.
My younger brother, who has always been physically bigger than me, fought off the big kids with a stick and locked the garage door. He’s the only hero of this story.

I never had another case. But some months later, a commuter on the bus to the big city plopped down next to my father one morning and innocently asked, “Are you a detective?”

My father spluttered that he was no such thing.

The woman showed him my business card.

“That’s gotta be one of my idiot kids!” he told her.

“I thought so,” she said. “But I thought I would ask. I need someone to find my sweater. I can’t find it anywhere.”

Where was this paragon of clienthood when I needed her?

By rights my story ends there. But many years later, when I was working at the children’s publishing company, Scholastic, I had the chance to interview Sobol, who lived in Florida, by phone.

I found him to be incredibly down to earth. He chuckled when I told him about my detective agency. I was not the only grown-up who’d shared such an anecdote with him over the years. Pulling some questions from old bios of him, I asked if he still fished or golfed. He laughed. He said most days he was lucky if he got up from his desk and made it to the refrigerator.

At the end of the interview, I mentioned in passing that our children’s magazine would be reprinting one of the Brown mysteries to accompany the Q&A I was writing.

In a line that sort of presaged my own future, Sobol replied, “Am I getting paid for this? I mean, if it’s just a few bucks, no big deal. But if it’s $25, send me the check.”

His last Brown title was published a few months after he died in the summer of 2012, at age 87. The best estimate I’ve found says the Brown books have sold more than 50 million copies—and counting. That should keep us in budding detectives until the end of this century, at least.

Count me out.
* * *
You will enjoy this Crime Reads piece that profiles Sobol and interviews his grown children.
Sobol’s 2012 obituary in the New York Times.
See you in three weeks!
Posted by Joseph D'Agnese at 00:00