Notes from the Wild West

First up, I noticed that there's a new Axes and Ales place opened up on 57th Street in Sioux Falls.  A long pandemic, a bitterly cold February, and a lot of booze.  As long as they wear masks, what could possibly go wrong?

Second:  No determination yet in what charges (if any) AG Jason Ravnsborg is going to face for hitting and killing Jason Boever on that dark September 12th night.

"Beadle County State's Attorney Michael Moore were also assisting Sovell. Both Vargo and Moore confirmed Friday that they continue to assist in the investigation. Moore said Friday that it's not unusual for accident investigations such as the one involving Ravnsborg taking as long as a year to complete. In the Ravnsborg case, prosecutors are still waiting on biological evidence and cell phone data. "From my experience dealing with a case where you're looking at possible criminal charges, it takes awhile to make sure you have all your information before you make a decision," Moore said. "You don't want to make a decision when there's still relevant information that we don't have. That's why it takes awhile."  (Argus Leader)

[Ahem]  There's a lot of South Dakotans (and other US citizens) who have found themselves in jail the very same night of the accident, but...  We all know what's really going on here, and a whole lot of South Dakotans are well and truly pissed off by it.
Including our Governor.  Kristi Noem has finally spoken out against something other than Amendment A (in which we, the people, of South Dakota legalized marijuana), and said “I share South Dakotans frustration about the amount of time this has taken,” Noem told Black Hills Fox News Wednesday. “To have more than 100 days go by without resolution on this is a disservice to the victim’s family.”  (KEVN News)
Meanwhile, our Governor is apparently worshipped from afar by followers on Twitter and Facebook over her stalwart anti-lockdown, anti-mask position regarding COVID-19:  "I believe in our freedoms and liberties... I'll continue to trust South Dakotans to make the right choices for themselves and their loved ones."

BTW, it's not working out that great.  We're 2nd in the country for per capita COVID-19 cases - 1 out of every 8, folks! And 6th for per capita COVID-19 deaths - 1 out of every 494.  In other words, for all you tourists that have been here, are here, and planning to come here - we're a great place to party (everything's open!) but be warned, most people are packing, and I'm not talking just about guns.

Anyway, there's a change in the political weather now that we passed Amendment A (legalizing marijuana both for medical and recreational purposes) and also another Initiative that legalized medical marijuana. Both measures passed by a landslide, and so now Noem is using our taxpayer $$$ to try to get the South Dakota court system to find them unconstitutional.  So far, a judge out of Hughes County has found Amendment A unconstitutional.  And Noem says (all on her own) that it's going to take an extra year to set up medical marijuana, so there.
And a lot of South Dakotans are well and truly pissed off by that.  Including people who loved her pandemic lack of response.  (It didn't help that she spent the pre-election season gone for 2-3 months, campaigning for Trump.  And she's still gone most of the time, fundraising for her future campaigns.)  The basic argument is simple:  So, Kristi, you trust us to make the right choices for ourselves and our loved ones in a life-threatening pandemic, but you don't trust us to make the right choices about anything else?  (ARGUS)

Prediction:  Based on the industrial hemp flap, which she opposed both before and after it passed, saying at the time, “I remain opposed to industrial hemp in South Dakota because of the impact it will have on public safety and law enforcement’s ability to enforce drug laws.” ( ????  Really?  Works in almost ever other state in the country. )  Anyway, the legislature couldn't quite get the votes to override her veto.  So it came up the next year, and passed again, and this time she didn't veto it.  I can guarantee that striking down Amendment A will be challenged in court, and if the challenge is lost, then it will be back on the ballot in November in a cleaner, simpler form.  And eventually, Kristi will give up and let us have our childish way.

But let's move on from doom and gloom to more exciting things.  Another mother in the freezer story!  This one from Japan:
Japanese woman hid mother's body in freezer for 10 years over fear of being evicted
(The Guardian)
Hey, it was Mom's name on the lease, and we all know that real estate is tight in Tokyo.
Did you know that in South Dakota, you can join in mashed potato wrestling? Clark, South Dakota celebrates its main crop with Potato Days and boasts potato decorating contests, recipe competitions, and yes -- mashed potato wrestling.  Read more here at the Clark Chamber of Commerce:  https://www.clarksd.com/potato-days/
For those of you who don't know, SD is full of corn, from the Corn Palace, to the endless fields.  But back in August, 2020, a lone cornstalk in Sioux Falls made news - and not just here. It came up through a crack in the concrete at the intersection of 57th Street and Minnesota Avenue on Sioux Falls’ south side. 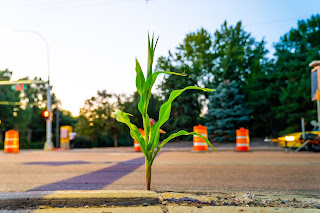 Dubbed the 57th Street Corn [a/k/a Cornelia] complete with its own Twitter accounts during its brief lifespan, the plant was a symbol of resiliency and hope as the pandemic rages on, Mayor Paul TenHaken said." And then some a-- pulled it up. What followed was sadness, protests, hopes that humanity is on its way out, and t-shirts. (See Argus Leader)

But fear not!  Cornelia was rescued and replanted in front of City Hall.  As for what happened next - I have no idea. Corn that is born of seed hath but a short time to live. Still, it was fun while it lasted.
Tales from SD from Not Always Right :
Story #1:
I live in one of few states not under full quarantine yet. Many restaurants are closed except for drive-thru, including ours. A coworker of mine is taking orders through drive-thru.

Customer: “Do you read the Bible, [Coworker]?
Coworker: “No, I’m not religious.”
The customer starts ranting.
Customer: “This disease is a punishment from God! Repent while you still have time!”

She simply took his order and then he went to the next window asking the same question, again ranting when given the same answer. A few minutes later, the same customer went through the drive-thru again, this time blowing a trumpet. We still don’t know what the deal was but everyone was talking about “trumpet guy” by the end of the day.
Story #2:

(The defendant has been found guilty of public urination. After a police officer was requested to make him leave an event at the local community center, [Defendant] insisted on taking a long piss out of his wheelchair in the community center parking lot, all captured for posterity on the officer’s body camera. This is his fourth arrest — and conviction — on misdemeanor offenses in the last six months. [Defendant] is representing himself.)

Judge: “Ready for sentencing? Does the State have any recommendations?”

State’s Attorney: “Well, Your Honor, [Defendant] is a frequent flyer in the criminal justice system. Over the years, he’s been found guilty of…”

(The list the State’s Attorney reads from has 48 convictions that range from public drunkenness to felony possession and ingestion of controlled substances, with forays into disorderly conduct, various levels of theft, violation of a protection order, simple assault/domestic abuse, and driving while intoxicated.)

Judge: “Do you have anything you’d like to say, [Defendant]?”

Defendant: “People can change, Judge.”
MY NOTE:  I swear we had that defendant in court up in Madison.  He might have been the one who showed up drunk and looked like he was going to puke all over the judge's bench...  As the attorneys backed off in perfect V-formation...
Happy February!
Posted by Eve Fisher at 00:01