The Return of the Prodigal Writer

I figured I should do an update post about why I haven’t been on SleuthSayers for over two months now. I have a lot to say but don’t know where to begin. So I’ll start with: 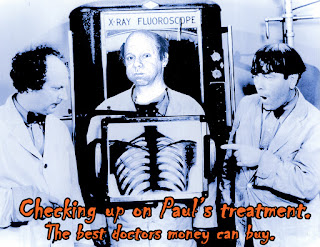 I guess I’ll begin at the beginning: Towards the end of October, right before Halloween, I was feeling really weird, so fatigued I could barely stand up, as well as other fun symptoms. My wife and personal doctor finally talked me into going to the ER. Long story short, the ER types said I had cancer and if I hadn’t come in when I did I could have been dead by the following weekend. That’ll sober you up. Of course, there might be some out there who like that idea, but hopefully not too many. At least if you want to kill me, kill me in a book not in real life.

So I spent the vast majority of November (and much of December) in the hospital. In and out 3-4 times, but mostly in. Because after the first dose of chemo, which worked well on the cancer but which also sent the rest of my body into the nine circles of Hell. But instead of greed, gluttony and other alliterative layers of Hell, it was more like pain and boredom. And I created my own circle of Hell: anger.

This isn’t my first bout with the Big C. But it’s a much worse experience than last time. My body is rebelling against the treatments. I had to be in the hospital for all kinds of transfusions of blood, platelets, white blood cells, antibiotics, Snickers and more. I was even on dialysis for a while, but luckily my kidney functions have come back.

I’ve been poked and prodded everywhere. It reminds me of this bit from Alice’s Restaurant: “An' I proceeded on down the hall gettin' more injections, inspections, detections, neglections and all kinds of stuff that they as doin' to me at the thing there, and I was there for two hours, three hours, four hours, I was there for a long time going through all kinds of mean nasty ugly things and I was just having a tough time there, and they was inspecting, injecting every single part of me, and they was leaving no part untouched.” Nope, nothin’ untouched or unexamined or undiscovered. 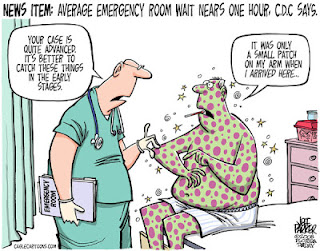 Things seem more on track now. I’ve had 2.5 doses of chemo now (maybe 3.5 by the time you read this—a half because they had to stop the first one mid-track. Unfortunately, for a couple of the remaining chemo sessions, because of the special chemo they’ll be using, I’ll have to be checked back into the hospital so they can keep track of my labs again and make sure things aren’t too out of whack. I’m not looking forward to that. Being in the hospital is horrible on so many fronts. Depressing. Being woken at all hours. Stir crazy. Lousy TV choices. Mostly crappy food, though some was surprisingly good. Horrible, uncomfortable beds and more.

Plus these days it’s filled with Covid patients. And because of so many Covid cases I couldn’t have any visitors.

Hopefully, things are on a better track now. I’m still having reactions to the treatments, but hopefully my body is responding to them.

And most of the nurses and assistants have been terrific with a couple mildly bad exceptions. But one of the Clinical Partners saved my life when I had a seizure because of all the crap they’re doing to me. I owe him big time!

I asked one of the nurses if the medical shows on TV are accurate and she said they have the doctors doing all the stuff that nurses do in reality. I’ll remember that next time I write something set in a hospital (although I probably won’t want to write anything remotely medical for a while…). And I know it’s cliched but these people are truly heroes.

I’ve been in life and death situations before, not the slow burn of cancer, immediate, no time to think situations. But now, with plenty of time to think, I can think of all the things that can be done, all the opportunities I missed in life, etc. But hopefully the cancer continues to respond to the treatments and things will get better by and by.

You know you’re in trouble when you look forward to hospital food, but at least that says you have an appetite, which is a good thing.

One of the first nights I was there 4 or 5 burly security guys were escorting a guy who had tried to escape back to his room. I didn’t understand why he tried to escape then. I do now.

Hoard mustard and ketchup and other condiments. Often, if you order something that requires a condiment you have to order it separately. Sometimes you get what you asked for, sometimes not. If you order 3 mustard packets you’re lucky to get two. If you get three, but don’t use them all, save them for the next time you need mustard and they shortchange you.

Be nice to nurses. Self explanatory.

I want to thank Rob and Leigh for stepping in and putting up emergency posts to fill my spots. They were terrific.

So that’s my story, kind of short-handed. But hopefully I’ll mostly be back on SleuthSayers, though medical issues might still cause me to miss a post or two. But it’s good to get back to some semblance of normal. And good to “see” you all!

The Blues Don’t Care has been chosen by the terrific and well-respected crime magazine, Suspense, as The Best of 2020 Historical Fiction Novel. I’m grateful to the fans, staff and contributors of Suspense for this terrific honor, which came totally out of the blue. And, besides infusions of platelets, as you can imagine I needed an infusion of good news right now… 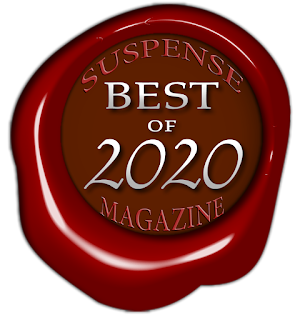 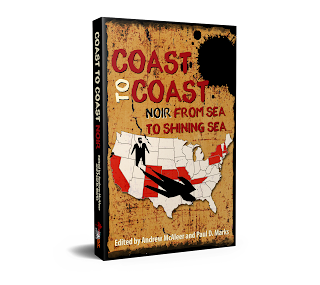 And Blues Don’t Care was also on two other best of/favorites of 2020 lists: