When History Went Up In Smoke 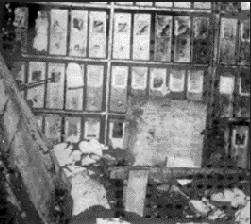 Anniversaries are interesting things.  Sometimes you see them coming, but sometimes they sneak up on you.  I have known for decades about a historical event that affected tens of thousands of people, but I just learned last month that its centennial is this coming Sunday.

It was the evening of January 10, 1921, in Washington D.C.  An employee of the Commerce Building saw smoke in an elevator shaft.  No one ever figured out how the fire started - although it led to the first rules against smoking in federal buildings.  the firefighters poured water into the basement for hours, even after the flames were out.

What was in the basement?  Only the records of the federal Census.

There are two kinds of data associated with the decennial Census of Population.  The statistics are published as soon as they can be crunched; they are widely available.  But the individual data - those forms you fill out - are stored safely away, kept strictly confidential, until seventy-two years have passed.  Then they are available for scholars, historians, and genealogy buffs.

It was those forms that were locked in a fireproof vault in the Commerce Building.  Alas, the forms from the 1890 Census did not fit in the vault and were sitting on wooden shelves outside.  They burned up in the fire.

And that is why, as any genealogist knows, the data from the 1890 Census is a big gaping hole in American family history.

Except, the full story  is a lot more complicated than that.

First of all, there were actually two fires.  Way back in 1896 some of the records from the most recent Census were being stored in Marini's Hall and the rear of that building caught fire on March 22.   What was damaged then were the so-called special schedules with data on mortality, crime, philanthropy and poverty, and transportation.

So the general schedules survived until they were destroyed in the fire of 1921, right?  No, it's still more complicated than that.  Only 25% of the records burned in 1921.  However, the rest were too water-damaged for current technology to salvage.  Sometime in the early 1930s the government gave up and destroyed the unreadable pages.

One more layer of complication: That fireproof vault, as it happened, was not water-proof, and some of the records from other censuses that had been stored on the lowest shelves essentially drowned.

If there is a positive result from the disaster it is this: it forced the government to change the way it dealt with our precious records.  The day after Congress authorized the destruction of those damaged files, the cornerstone for the National Archives building was laid.

But if you  wanted to trace your family history and wondered why you run into a huge hole in 1890, it all goes back to a fire that took place one hundred years ago this Sunday.