by Joseph D'Agnese
I have a lovely real-life mystery for you today, but what I really want to talk about is cardboard boxes and what’s hidden inside them.

I’ve written lots of nonfiction, particularly in the self-help/financial/memoir genres, for various ghostwriting clients. But I’ve never done the sort of books my wife writes—deep narrative nonfiction. I was probably in high school the first time I learned the difference between primary and secondary sources. But I had to live to my fourth decade before I ever touched a primary source worth writing about. 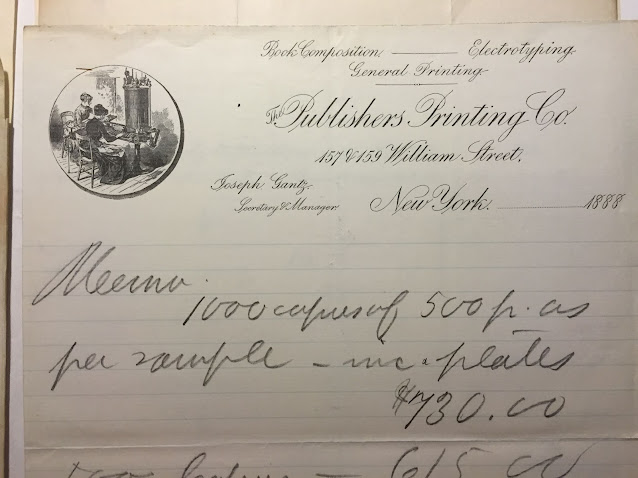 By now I’ve tagged along with Denise on research trips to three university libraries, the New York Public Library, the Library of Congress, two National Archives facilities, a bibliophilic organization in New York, and a presidential archive. And she’s trained me to be a half-competent researcher of online resources. I’ve come away with a profound respect for the work she and archivists do, as well as fostering a deep geek love for old stuff tucked away in new boxes.

Nothing beats holding a letter that was written by hand with a fountain pen a hundred years (or more) ago. Every thing about the artifact screams history. The grain of stationery, its postmarks, and its postage stamps are just the beginning. Sometimes letters are written on the highly ornate stationery of exotic hotels and resorts that are long gone. Other times they’re written on corporate stationery of businesses—such as carriage manufacturers and ice delivery firms, to choose two examples—that barely exist anymore. Sometimes you find poignant sentimental items—dried flowers, coiled human hair, or faded scraps of fabric—tucked into those letters.


I love the way old letters were folded to get them down to the size of an handmade envelope. Or the creative methods correspondents employed to reduce the total weight of the envelope, and thus the required postage. When they got to the end of a page, they’d maybe turn it upside down and write in between the lines, or diagonally across their previously written text, confident in that their confidante on the other end would be able to decipher it all.

"My dear Paul: I hope you can freaking read this..."
Researchers must quickly learn how to decipher the handwriting of the person they’re researching. But it’s hit or miss. I have found it easy to read the scanned letters (online at the Library of Congress) of Thomas Jefferson and his fellow Declaration of Independence signer, Francis Hopkinson of New Jersey. They had crystal-clear penmanship. But the letters of Edith Bolling Wilson, second wife and widow of Woodrow Wilson, scrawled in chicken scratch with an unsharpened pencil? Fuhgeddaboudit.

Meanwhile, as you pore through these marvelous treasures in archival boxes, the clock is ticking. A friend whose wife earned a doctorate in art history told me how he’d accompany her on research trips to various libraries and archives because “research is a family effort.” He’s totally correct.

Time and money are working against you. You’re usually visiting a new city to access these precious archives, crashing with friends or staying at a hotel. You’re eating out. Maybe you have a flight out of town in three days, and you can’t spare another day researching because you have to be at another facility on Thursday. You get to the archives right when it opens, and you read through lunch. When the library closes, you’re out the door, wired and starved. Your eyeballs are fried, sunlight feels alien, and your smartphone feels like the most artificial thing you’ve ever touched. My time in archives have transformed me into a stationery snob.

Archivists instinctively describe their collections in cubic feet. A banker’s box, roughly 1 cubic foot, can hold about 2,000 sheets of paper. A Hollinger box, on the left down there, holds about a third of that. But in my experience, if you hit a World War II-era box filled with onionskin stock or carbon copies, each of those boxes actually holds about 63 million sheets of paper. 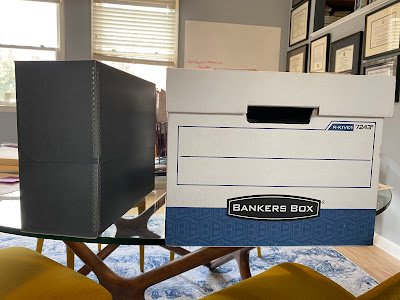 There’s only so many hours in a day. Using finding aids, you can target your search. But sometimes you go on fishing expeditions, hoping to find materials no researcher has ever laid eyes upon. I found that if I worked my butt off, I could maybe get through one full box in a day, or three or four of the smaller ones, if I could single out just the specific folders we thought would be most likely to hold what we were looking for. But because you’re human, you can only survey so much.

Sometimes, archivists are bursting to share juicy tidbits with you, like the time an archivist brought Denise a copy of a report by a young medical doctor, Charles Augustus Leale, who attended a certain tragic theatre performance in Washington, DC, in 1865. Leale was the first doctor to touch Lincoln after that fatal shot, and managed to get the president’s breathing started again. Leale’s account was only discovered by a researcher in 2012. The account perfectly fleshed out a chapter in Denise’s latest book.

To write her first book of this type, my wife accessed the Department of Energy records pertaining to the Manhattan Project held at the National Archives facility in Morrow, Georgia. Fans of the book still occasionally ask if she came across the names of their relatives who worked on the project.

“No,” she says. “But you’re welcome to try finding them yourself. We only got through a handful of boxes, and there are 5,000 more boxes in that collection.”

Math geeks: If you use the conservative estimate that one cubic foot contains 1,800 sheets of paper, that means that one collection alone consists of at least 9 million sheets of government paper. Archival budgets being what they are, most of those boxes have never been opened and processed since they were entrusted to the National Archives. There are tons more books about the Manhattan Project to be written, I assure you. Just not by Denise.
Which is, by the way, why archivists drink. And when they do, they tell wonderful stories about things they’ve found rooting around the records. One such mystery is the one beginning above. It’s a pair of ads that ran in the New Yorker magazine in November 1941. Taken at face value, they’re just promoting a parlor game. But if you’re in Naval Intelligence in August 1942, and you see German words, references to air-raid shelters, and random letters and numbers, you start thinking secret codes “of a possible subversive nature.”

"Attention of the Atlanta Zone Intelligence Officer was called to the fact that the dice shown in the various ads contain the numerals 12-7 and 24 and 5. It is to be noted that 12-7 would be December 7th, and 24.0 is practically the latitude of Pearl Harbor."

Are we really to believe that America’s enemies were communicating via pricy ads in a New York literary magazine? Lieutenant Commander J.L. Laube of the Sixth Naval District certainly thought so. He suggested that someone track down the person who placed the ads on behalf of this mysterious New York publishing company.

When our friends at the archives first mentioned the ads to me, I knew they had the makings of a decent short story, even if the real-life investigation ended quite prosaically. But that’s the thing. I don’t know how the real-life story ended. Just one more scrap of paper would have satisfied my curiosity. Beginning, middle, and end.

Don’t worry. I’ve got this. That sheet of paper is somewhere in a cardboard box in Morrow, Georgia. I just have to page through a couple of million sheets to find it.
Or I could make it up. That, my friends, is the beauty of fiction.