Tell Me a Light Story, Tell Me a Tale

Your Job: Write us a story of mystery and intrigue.

It’s a box, just an ordinary carton for a light bulb. At $25, the lamp is a bit expensive, but it’s an LED ‘smart bulb’ with motion and light sensors. It also communicates with Google Home automation, which activates it at sundown and disables it at sunrise. The flood lamp supposedly lasts 22 years and uses less than $2 a year in electricity.

Here are the four sides of this curious box:

The box features the specs, a picture of the light and two additional images, one of them a girl who’s apparently joyously toying with her cell phone. The other graphic also pictures a girl… but… what the hell? 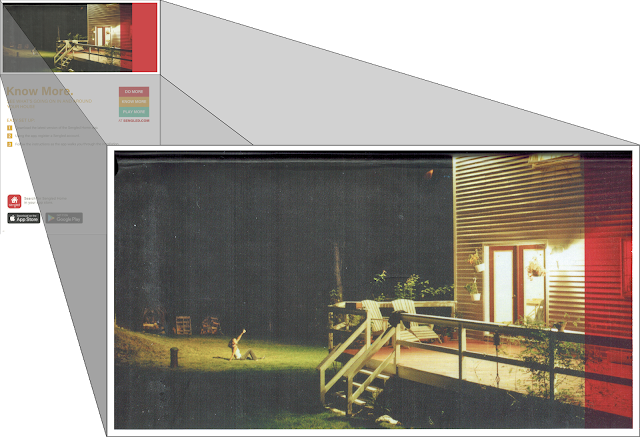 The well-lit house appears to be in a forest. This night, two lawn chairs sit empty on the deck. Wood pallets on one side rest against a tree.

But why is the girl on the ground? What is she reaching for? Or pointing at? Or warding off? Why is her pose so peculiar?

Imagination might suggest an Andrew Wyeth painting gone wrong. Or perhaps the girl has been kidnapped, captured and held in the woods. Perhaps she’s trying to escape.

But who’s taken her? Seven little guys with names like Flippy, Flappy, Floppy, and Dorky? Or a weird prince with delusions of Roquelaure? Or aliens? Or a boyfriend in a consensual game of hide and seek? Or she twisted her ankle when three bears chased her? Are those bears hiding beneath the deck or behind the pallets? Enquiring minds want to know.

So click on the picture below to expand it for any grainy detail you can discern, then tell fans a story about the scene.

Mystery number two: Pray tell us what the hell the package designer was thinking.