You're Invited to Check out Chesapeake Crimes: Invitation to Murder

Last week the ninth volume in the Chesapeake Crimes anthology series, Invitation to Murder, was published by Wildside Press. Donna Andrews, Marcia Talley, and I have been editing these books together since volume four, when I joined the team. The series, showcasing stories from the Chesapeake Chapter of Sisters in Crime, has had remarkable success: twenty-six nominations for major short story awards (thirteen Agathas, four Anthonys, three Derringers, five Macavitys, and one Thriller) and eight wins (four Agathas, one Anthony, one Derringer, and two Macavitys). Donna, Marcia, and I are hopeful that readers will enjoy this newest volume just as much. With that in mind, I'm going to talk about the stories in their order of appearance in the book, with a brief description of each and what I think makes it special.

The book begins with "The Dame and Thadeus Birdwhistle" by Karen Cantwell. In this story, two uppercrust Bostonians learn, to their dismay, that their brilliant and previously polite young son has begun writing a dime detective novel, and he's adopted the lingo and attitudes of his characters. When the boy's mother tries to discover how he's learned the things he knows, she stumbles into a mystery of her own. This is a quirky, delightful story, with dialogue that sings.

"Secrets to the Grave" by K.M. Rockwood. A proper older woman finds herself the victim of blackmail. But just because she's proper doesn't mean she's a pushover. This story has a wonderful tone. While it's not set in England, I think it will appeal to anyone who enjoys Golden Age mysteries set in small English villages.

"The Mysterious Affair at the Escape Room" by Leone Ciporin. Several relatives, most of whom don't like each other, go to an escape room. The room pays homage to Agatha Christie--as do the events that transpire in that room. This story has a clever premise that pays off in the end.

"The Do-Gooder" by Adam Meyer. When it seems a rich woman isn't subject to the same rules as everyone else, a homeless woman takes it upon herself to see that justice is served. Meyer really brought the main character to life. A wonderful example of deep point of view in action.

"The Problem with Open-Ended Invitations" by Cathy Wiley. When a friend needs a place to stay for a little while, Cynthia offers her a room. And then the friend stays and stays and stays. This story's plot twists and turns in deliciously unexpected directions.

"Muggins" by Josh Pachter. Two cribbage players square off in the park, talking about the game and their lives. This story is a great example of using subtext to propel a plot forward.

"The Killing Winds" by Mary Stojak. After someone tries to kill a PI's assistant, he takes the woman on a trip to Chile, hoping to outrun the gunman. Stojak does a great job with the setting, putting the reader right there with the wind and the mist and the danger of hiking in Patagonia.

"Make New Friends, But Keep the Old" by Jane Limprecht. This is a whodunit set at a retirement home. Limprecht's plot goes in unexpected directions while addressing the important social issue of financial crimes involving the elderly.

"Good Morning, Green Leaf Class" by Sarah Cotter. This story is told entirely via emails among parents of a pre-school class whose prior teacher died, seemingly by accident. A wonderfully structured story that shows the importance of reading between the lines. 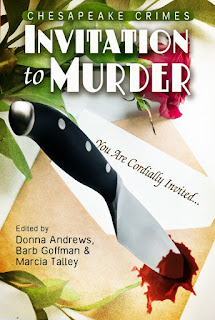 "The Great Bedbug Incident and the Invitation of Doom" by Eleanor Cawood Jones. A woman goes to London to attend an event, but when her hotel room has bedbugs and she has to get another one, she winds up in the middle of a murder mystery. Jones showcases her amusing voice with witty dialogue and exposition, including her choice of details.

"Guns and Yoga" by Maureen Klovers. When a gun store seeks to open in an upscale neighborhood, activists' tempers stretch beyond a community meeting. Klovers makes good use of multiple points of view to enable the reader empathize with characters on both sides of the debate.

"RFP/RIP" by Britt Alan. A team of government contractors is working night and day to get a proposal ready for submission. That would be enough to drive anyone to murder. And it does ... This is a story with motives as complex as the characters.

"Aumakua" by Maddi Davidson. Two surfers in Hawaii discuss island folklore while one of them tries to discover the location of missing treasure. Davidson brings Hawaiian culture to life by mixing the islands' history and language into her thriller.

"The Color of Envy" by Joanna Campbell Slan. Set in early 1900s Charleston, two teenaged cousins vie for the same man. An interesting take on the Cinderella story, with some cool science thrown into the mix.

"True Colors" by Robin Templeton. The wife of a high-powered politician takes steps to ensure her past remains a secret. Templeton weaves the main character's backstory deftly into the plot so that it pushes the story forward at each step.

"All Tomorrow's Parties" by Art Taylor. A woman with a drinking problem is determined to put her past behind her and lock down a better future--or die trying. This is another story that brings the main character to life through intricate use of deep point of view, as well as the engaging writing style for which Taylor is well known.

"Sunnyside" by Stacy Woodson. After a life on the run from the mob, Michael ends up in the same retirement home as the guy who's been gunning for him for decades. This story has a great voice, especially the contrast between the main character's dialogue and thoughts.

So that's it. Seventeen stories. I hope you're intrigued enough to pick up the book. Chesapeake Crimes: Invitation to Murder is available in trade paperback and ebook formats. If you've already read some or all of the anthology, I'd love your feedback in the comments.

And before I go, this year's Bouchercon will be this Friday and Saturday online. If you've registered to attend, I hope you'll check out my panel, What's a Weapon: Choosing Ways to Murder. I'll be talking about murder methods beyond guns, knives, and poisons with Tori Eldridge, Linda Joffe Hull, and Tessa Wegert, with Alec Peche moderating. The panel starts at 6 p.m. ET (3 p.m. PT) on Saturday.

And don't forget to watch the pre-taped opening ceremonies, where the Macavity Awards will be announced. I'm up for best short story--fingers crossed! And then tune in for the Anthony Awards gala Saturday at 8 p.m. ET (5 p.m. PT), where I'll be up for the Anthony for best anthology for Crime Travel. Fingers crossed again!