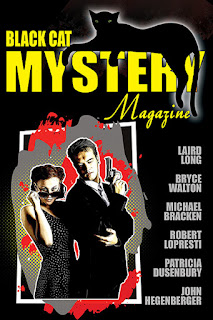 Sometimes a wrong turn can take you to a wonderful address.

SeuthSayer Janice Law is one of my favorite living short story writers.  She has made my Best-Story-of-the-week six times and my best-of-the-year four.

Back in 2012 Janice had a story in Mystery Writers of America Present Vengeance.  The title was "The General" and it concerned a Latin American dictator, living in exile in the United States, who becomes convinced that his wise and elderly gardener is stealing away his son's love and respect.

When I read the story I was pretty sure I knew where it was going.  To my delight I was completely wrong. Janice fooled me completely.

But, I realized, just because Janice didn't choose the direction that occurred to me doesn't mean it is a dead end.  I could drive that way on my own.

And so I wrote "Worse Than Death," which is now available in the sixth issue of Black Cat Mystery Magazine.  In my story, a dictator named Hidalgo is still very much in power.  His son, Teo, is kidnapped by a gang led by a wise old teacher.

They don't want money.  They don't even ask Hidalgo to resign.  What they demand is that he send them a confession of all his crimes.  Well, not all.

"I am only interested in wrongful deaths.  Not torture, not robbery, not false imprisonment.  Or graft, of course!  My God, if we tried to cover all your sins poor Teo would die of old age, wouldn't he?'

The viewpoint character is Hidalgo's head of security. He knows if the boy is harmed he will died for it.  But if Hidalgo writes the confession the whole government is likely to wind up on trial at the World Court.  So you might say he is highly motivated...

Clearly this is not one of my laugh-a-minute romps.

It is also my third (and I sincerely hope, last) story about a child kidnapping.  (See this one and that one.)  When I told a friend about this he said he wasn't going to let me anywhere near his kids.

Some people are so suspicious.