by Michael Bracken
Though the first Bouchercon was held in 1970 and the first Anthony Awards presented in 1986, Bouchercon 2020 will be, if I’ve counted correctly, only the tenth time an Anthony has been presented for an anthology or collection.

As a contributor to three Anthony-nominated anthologies and the editor of one, it may be selfish to suggest that I wish an Anthony were awarded in this category every year.

The award seems to have had slightly different names over the years, and here’s a look back at past winners. The publishers of Anthony-winning anthologies/collections include both major publishers and small presses, and the editors tend to be well-known. Bouchercon’s own anthologies have won twice and, coincidentally, the only publisher to have won twice published the Bouchercon anthologies.

2017 Best Anthology or Collection—Greg Herren, Blood on the Bayou: Bouchercon Anthology 2016 (Down & Out)

2016 Best Anthology or Collection—Art Taylor, Murder Under the Oaks: Bouchercon Anthology 2015 (Down & Out)

2020 NOMINEES FOR BEST ANTHOLOGY OR COLLECTION

There are five nominees for Best Anthology or Collection this year, each equally deserving. If you enjoy short stories, and if you want to read several great stories, you should order all five. Within the pages of these anthologies you will discover Agatha, Anthony, Derringer, Edgar, Macavity, and Shamus Award-nominated short stories, an Agatha Award-winning story, a Derringer Award-winning story, and at least one story selected for inclusion in The Best American Mystery Stories 2020.

The Eyes of Texas: Private Eyes from the Panhandle to the Piney Woods, edited by Michael Bracken (Down & Out Books)

¡Pa’que Tu Lo Sepas!: Stories to Benefit the People of Puerto Rico, edited by Angel Luis Colón (Down & Out Books) 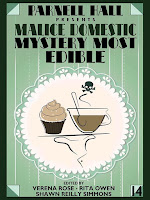 Murder A-Go-Go’s: Crime Fiction Inspired by the Music of the Go-Gos, edited by Holly West (Down & Out Books)


So, order all five, read them closely and, when you receive your Anthony ballot this year, vote for the anthology you feel most deserving.

Though Art Taylor is the only SleuthSayer to receive an Anthony for Best Anthology, Paul D. Marks co-edited the Anthony-nominated Coast to Coast: Private Eyes from Sea to Shining Sea (Down & Out), and Barb Goffman and I each edited an anthology nominated this year. So, SleuthSayers are well represented in this category.