About Those Supreme Court Justices...


A couple of weeks ago I wrote a blog post about the controversy surrounding the potential removal of a bust of a U.S. Supreme Court Chief Justice from its perch on a wall in the U.S. Capitol by giving some background on the breath-taking racism exhibited during his lifetime be said chief justice: Roger B. Taney of Maryland.

In that post I referenced President Andrew Jackson's stunning feat of appointing five justices to the Supreme Court over the course of a mere eight years in office. I promised to revisit and expand upon this feat in the course of a future blog post.

Well, here it is.

Here is the most important part: there is nothing in the United States Constitution regarding the size of the Supreme Court. All the Constitution does is provide for the existence of the Court, and establish its primacy among the country's federal and state judiciary systems–it's literally the Court of Last Resort.

The Constitution leaves the rest up to Congress, including the power set the Court's size.

Americans collectively tend to think that playing politics with the Supreme Court is a relatively recent development. Not so.

Initially a six-member judicial body (Five associate justices and one chief justice), the Court found
itself reduced in number by one (Four associate justices and one chief justice) as part of John Adams' attempt to overhaul the federal judiciary on his way out of office as president with the Judiciary Act of 1801. Also known as the "Midnight Judges Act," this law helped spawn the ground-breaking court case of Marbury v. Madison, which the Supreme Court used to establish the precedent of judicial review (literally the power of the Court to serve as the final arbiter of what is and is not "Constitutional"–and therefore "legal.").

Adams' successor Thomas Jefferson and his Democratic-Republican Congressional majorities quickly restored the Court to six seats upon taking power in March of 1801. They further expanded the Court in 1807 by adding another seat (bringing the number of justices to seven) as part of an overhaul of the federal judiciary that included expanding the number of federal circuit courts to seven (At the time each Supreme Court justice was also expected to hear cases on a particular federal circuit).

The Court stayed at seven for thirty years. Justices came and went, vacating office either through retirement or death.

And Then Along Came Andrew Jackson:

Up until his final week in office, Jackson (1829-1837) filled three Supreme Court vacancies, including that of the chief justice, upon the death of his long-time nemesis, John Marshall.  This was the seat Jackson awarded to his long-time supporter Taney (whom he had tried and failed to place on the high court earlier in his administration).

And of course Jackson filled those two additional slots. No president before or since has played such an outsized role in the formation of a coequal branch of the federal government. Not surprisingly, the majority of Jackson's choices reflected his political instincts and values: these were in every important way, "Jackson men."

The results were, frankly, disastrous.

As stated above, Jackson's court majority reflected his choices and his prejudices, not those of the developing nation. And they did so well into the 1860s.

The irony is that the pro-slavery, anti-central treasury majority Jackson succeeded in placing on the Court helped bring about the civil war Jackson himself worked so hard during his presidency to stave off. Talk about your law of unintended consequences!

And get this: Congress actually further expanded the Court during the Civil War to ten justices. Then the war ended, Abraham Lincoln was assassinated shortly thereafter, and his vice-president, Andrew Johnson of Tennessee, took office as president.

Andrew Johnson–Man Out of Time:

The problem for Johnson was that he was thirty years too late to be an effective president. This is not
to say he was too old. It's that Johnson, the sole Democratic senator to oppose secession in the run-up to the Civil War, had been added to the presidential ticket as a "Union Democrat." In truth, he was really anything but.

Johnson was, in fact, the final relic of Jacksonian Democracy. Like the antebellum Supreme Court, Johnson, who had come of age during Jackson's presidency, resembled the post-Jackson Supreme Court in that both he and the Court reflected Jackson's beliefs and prejudices. Thus Johnson found himself president, but was completely out of touch with both the times and with the Radical Republican politicians who controlled Congress with massive, mostly veto-proof majorities.

And once these firebrands realized what they had on their hands with Johnson, they set to work rendering his presidency irrelevant and enacting their Reconstruction agenda over his vetoes and his furious protests.

This included especially input on the composition of the Supreme Court. In order to keep Johnson from adding justices to the Court, Congressional leaders passed legislation (The Judicial Circuits Act) lowering the number of federal circuits from ten back to nine, and the number of Supreme Court Justices from ten to seven.

These "removals" were intended to come about through attrition: as justices retired or died, they would not be replaced until there were once again only seven justices on the Court. The sole intent of this move seems to have been to deny Johnson a Supreme Court nominee, and in that, the Republican Congress was wholly successful.

In fact the Court didn't actually reach seven again. In the years between the law's passage in 1866 and the end of Johnson's term and president in early 1869, only two justices (John Catron and James Moore Wayne) vacated their seats (both by dying), and so the Court sat at eight when Congress passed the law quoted at the beginning of this post. And it was back to nine.

And it's pretty much stayed that way in the hundred and fifty-one years since.  Except... 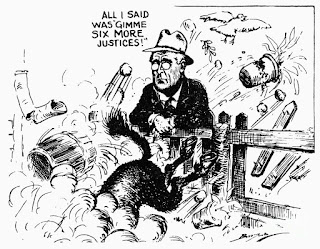 During the 1930s President Franklin Delano Roosevelt actually floated a proposal to pack the Court with six more justices, bringing the total number up to fifteen. He hatched the plan out of frustration with the Court's frequent rulings against aspects of his New Deal, and the plot went nowhere, with Roosevelt abandoning it in the face of fierce criticism from conservatives and liberals alike.

But the Court got the point. Rulings against Roosevelt's legislative agenda tailed off after his "Court Packing" escapade.

In the end, it was just more playing politics, which is something the American political system has been doing with a supposedly apolitical federal court system at least since the 1790s. And in the current climate, with a conservative majority on the Court despite the fact that only one Republican presidential candidate has won a majority of the popular vote out of the last seven elections, there is once again talk of expanding the Court to make it as an institution less anti-democratic.

And if that actually happens, well, it wouldn't be the first time.

See you in two weeks, when we will get back to talking about historical fiction!
Posted by DoolinDalton at 07:19