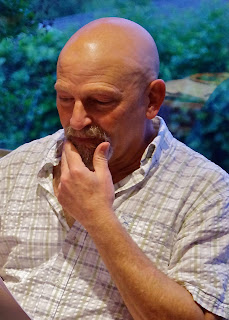 Special treat today.  I first met Craig Faustus Buck at Bouchercon in Long Beach in 2014, when we shared a panel on short stories, but my fondest memories come from a year later when we were partners at the speed dating session at Bcon in Raleigh.  We went from table to table of readers, each getting three minutes to explain the wonders of our books.  By the end it was so routine that I suggested we plug each others' books instead.  He wisely deferred.

Craig has been nominated for numerous awards (winning some) for his neo-noir novel Go Down Hard, as well as his short stories, many of which are available for free at CraigFaustusBuck.com  He is also a screenwriter whose credits include an Oscar nomination and the famous episode where The Incredible Hulk drops acid. He says he takes great pride in his pit mastery and sucks at poker.

It Is What It Is… Or Is It?
by Craig Faustus Buck

The phrase "it is what it is" was first seen in print in 1949 when a Nebraska newspaper used it to describe the difficulty of pioneer life. USA Today crowned it the #1 cliché of 2004. These days it is as ubiquitous as Starbucks. And that's unfortunate.

The phrase is what psychologists call a "thought-terminating cliché" (also known as a semantic stop-sign, a thought-stopper, and bumper sticker logic). It is a way to end discussion without making a point, to solve a problem by abdicating responsibility. It implies that nothing can be done, that what ever "it is" is inevitable. It is an iron hand squeezing the windpipe of further thought.

To a writer, however, the phrase can be a terrific wakeup call.

Whenever I find myself thinking "it is what it is" about what I'm writing, I know it's time to take the bull by the horns and a find a way to turn "it" on its head so that what it is becomes something my reader isn't expecting. This could be a plot twist, a character oddity, an emotional outburst, or any number of other doodads from the writer's toolkit. If I were to take things for granted and simply describe them without exploring their potential, I'd wind up writing the sort of bland exposition that my poor readers would have to clean off their shoes after I've made them step in it. Surprises delight readers and, by definition, cannot exist if plot lines, emotional arcs or characters simply are what they are.

For example, in my short story "Honeymoon Sweet" (Bouchercon anthology, 2014), I started out with: 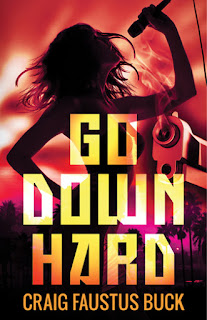 For a sweet house, right on Santa Monica Beach, it was unbelievably easy to break into. Mickey found a window he could open with a putty knife, so the double-locked doors were a joke. And Lana disabled the alarm within the forty-five-second grace period before it would have triggered. They were in and no one knew.

I thought it was a nice way to open a story. The first line was promising. But the rest of the paragraph seemed to telegraph that this was just another caper. It was saying "it is what it is" instead of "it won't be what it seems." So I added:

What a great way to kick off the honeymoon.

All of a sudden the stage was set. The reader knew to expect the unexpected and, as a bonus, there would be an emotional component to the story. As a seat-of-the-pants writer, the addition also sent me in a direction I wasn't expecting, which made the writing infinitely more fun, and the story more fulfilling to me and, hopefully, to readers.

While "it is what it is" is literally stating the obvious (a writer's felony) and figuratively avoiding creative solutions (a writer's suicide), it can also be like one of those signs on highway offramps that warn "Wrong Way" when you consider taking that path. Heed the warning while you're still in your first draft. Because if you don't, well, it is what it is.