by DoolinDalton
One of the greatest musicians of the 20th century died earlier this month. An intensely private, and highly introverted man, he would in all likelihood have quailed at the public testimonials (including this one) which have poured forth since the news of his passing.

Well, who was it that said, "Funerals are for the living"?

Whoever it was, they were right.

So I'm going to use this week's blog post to talk about the late great Neil Peart, no matter how much he might not have wanted me to.

All that said, I scarcely know where to begin. This is because Peart, and Rush, the band he, guitarist Alex Lifeson and bassist/keyboardist/vocalist Geddy Lee helped make iconic in the annals of rock & roll, have had such an outsized influence on my life since that day, not long after my 16th birthday, when a friend introduced me to their work.

And fittingly, my first impression of Rush's work was getting to watch them in concert on MTV, back when MTV played nothing but music videos. I saw Neil Peart perched behind his massive drum kit, all focus, all professionalism, the embodiment of precision and perfection, seemingly unaware of the audience, and came away from the experience changed.

(The concert film in question was "Exit...Stage Left." If you're curious you can check out live cuts from it such as fan favorites "Xanadu"  and "La Villa Strangiato" on YouTube. Or you can watch the entire thing (just under an hour in running time), if you're unfamiliar with Rush, and want to know more. Just be prepared to say, "How did they DO that?" over and over again)

I had no idea someone could play drums like that. And as part of a three-piece! It sounded like there were six or seven guys up on that stage! 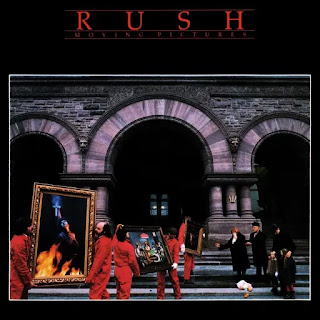 I had to learn more. So the next day, I went out and bought their most recent studio album, 1981's Moving Pictures (of "Tom Sawyer" fame). I couldn't believe what I heard. Not just "Tom Sawyer" (The band's biggest hit, and without doubt the most "air-drummed" song of all time), but a host of incredible songs, including, but not limited to "Limelight", "Red Barchetta", and the instrumental "YYZ" (taken from the three-letter geocode designation for Toronto's Pearson International Airport, with the morse code for the letters "Y-Y-Z" played as both the intro and outro of the song, no less!). That was it. I was a fan from that first listen onward, and have been ever since.

And this was before I even began to explore the band's extensive catalog of previous work. Too much to go into here, but 2112, A Farewell to Kings, Hemispheres, Permanent Waves, Fly By Night, all great in their own way, and no two of them alike in approach and content.

Rock had already given rise to a whole succession of great drummers: Ginger Baker of Cream and Keith Moon of The Who (both of whom were early idols for Peart when he was still learning his craft), John Bonham of Led Zeppelin and Bill Bruford of Yes and King Crimson, just to name a few. 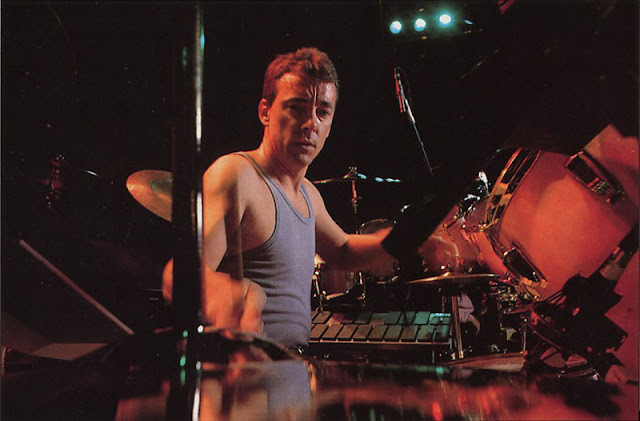 But Peart transcended all of them, combining the flourishes of the wild men (Baker and Moon) with the rock-steady bombast of Bonham and the technical innovation of Bruford. I mean, come on. The guy played everything you can think of to hit and get a sound from and still call it "percussion." And he could do it faster and cleaner than any other rock drummer out there. AND, like Michael Jordan dunking from the top of the key, he made it look effortless.

And as if that weren't enough, Peart also served as the band's lyricist. Lee and Lifeson wrote the music, and Peart gave them the words. Reminiscent of the collaboration between Elton John and his lyricist Bernie Taupin, if Taupin had been an introverted genius with a voracious appetite for science fiction and a strong "independent contrarian" streak.

By and large Rush eschewed love songs (at least the traditional ones). Their career arc hewed from early twenty-minute-long sci-fi epics such as the first side of 2112 to ever more introspective pieces which wrestled with the human condition. "Limelight," for example, gave  the notoriously shy Peart's response to the (for him) exhausting question of what those who achieved "fame" owed to the world at large and to those who admired them in particular:

In other words, "Nothing."

On 1982's Signals, the band's follow-up to the multiplatinum Moving Pictures, Peart, Lee and Lifeson produced a lead single "Subdivisions", which addressed the generational experience of modern youth growing up stultified in the banal suburban tract houses of their parents, of their inevitable flight to the flash, bustle and noise of the big city, and of their eventual middle-aged longing to return to the neighborhoods of their adolescence. "Sell-outs in search of a hit," they were not.

Here are the lyrics to "Subdivisions" in their entirety: 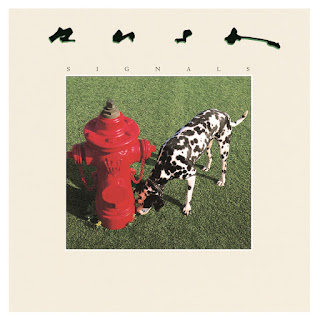 Sprawling on the fringes of the city
In geometric order
An insulated border
In-between the bright lights
And the far, unlit unknown

Nowhere is the dreamer
Or the misfit so alone

Somewhere out of a memory
Of lighted streets on quiet nights

(Sidenote: I used "Subdivisions" in my first teaching job as a tool to teach my eighth grade English classes the difference between a metaphor and a simile.)

This song tore through me the first time I heard it. Of course, at seventeen myself, on the cusp of adulthood, growing up in a comfortable suburb of Spokane, Washington (an experience which my parents had worked damned hard to provide for my brother and me, and for which I am still grateful, at least, I am now.), I guess you could say I was pretty much this song's target audience.

And it goes without saying that I followed this path: took off for the Navy and then for the city (several times). And now, staring down fifty-five, I've come full circle: I live on a well-lit suburban street, and my nights are quiet.

Who knew a hard rock band was supposed to make you think? Most of the other stuff I listened to at the time (Read: early '80s Heavy Metal.) sure didn't.

In many ways Rush's music and Peart's lyrics served as a double-gateway drug for me. Had I never listened to the complicated arrangements of such Rush songs as "YYZ," "Beneath, Between and Behind," and "Cygnus X-1," I might never have gone in search of more adventurous music, listening to artists who took chances. I definitely wouldn't have been able to appreciate the likes of Miles Davis, or The Police, or Bowie, or Roxy Music, or, or, or..

And Peart's lyrics pushed me to find other voices, like Springsteen, and William Shakespeare, and Loreena McKennitt, and Bob Dylan, and James Baldwin, and F. Scott Fitzgerald, and Ross MacDonald, and Toni Morrison, and Sting, and, and, and... 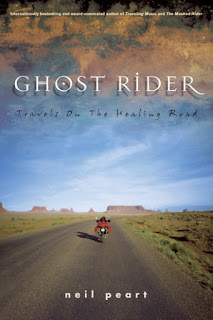 There's so much more I could say about Neil Peart, but others have said it better elsewhere (including Peart himself, in his book Ghost Rider: Travels on the Healing Road, wherein he chronicled the experience of losing his teenaged daughter in a car wreck and his wife to cancer, within an eighteen month period, and what it took to come back from that experience.).  And this isn't intended to be a comprehensive retrospective.

It's really just a fond remembrance of a great artist, who died this month after a three-year-plus struggle with brain cancer. Peart left behind the second family he built after he finished mourning the loss of his first one: a second wife, and a second daughter. He also leaves behind legions of fans he touched without really trying to.

In one of his infrequent interviews Peart revisited his struggle with the demands fame placed on the artist, something he had chronicled so ably in "Limelight" a couple of decades before. "I never wanted to be famous," he said. "I just wanted to be good."

Whether he liked it or not, he was both.