Don't Shoot the DJ: Moby's Then it Fell Apart


by Lawrence Maddox
Reader's of crime fiction are used to grappling with unlikeable lead characters.  The badder the lead, the better the read. Jim Thompson's Nick Corey, Donald Westlake's Parker, and Larson's Lisbeth Salander are just three of the countless  characters enjoyed from a safe distance. I really do like them, but if they called, I probably wouldn't pick up.

For obvious reasons, autobiographies do the opposite. Even when the authors are famous for being less than savory, a character emerges in their books we eventually cozy up to. This seems especially true for show-biz memoirs. The Errol Flynn offered up in My Wicked Wicked Ways commits his swashbuckling with a wink and a smile. Few readers would turn down an invite to Flynn's Zaca, the ultimate party boat. I recently finished all three of Artie Lange's books, including his latest, Wanna Bet? He's a stand-up comedian who's also a hopeless addict, and he turns his self destruction into comedy routines. He's cleaned up (again), and I'm rooting for him.  Julia Phillips made a lot of powerful tinsel-town enemies with her tell-all You'll Never Eat Lunch in this Town Again.  She was a film producer who duked it out in 1970's Hollywood , a boy's club where few women producers were invited. I was in awe of her by her book's end. 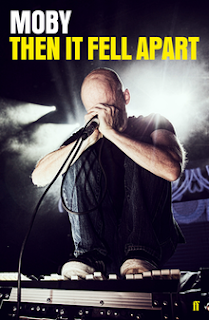 I just finished Moby's Then it Fell Apart (2019). I'm not necessarily a fan, but his book promised a particular look at the 2000s that interested me. By particular look, I mean raves, nightclubs, parties, sex, drugs, and a mega-star rave-king's access to such. It's over three hundred pages long, and I gobbled it up in a few days. Much like My Wicked Wicked Ways or You'll Never Eat Lunch in this Town Again, I couldn't put it down. It didn't seem to matter that by the book's end, I was dubious of Moby. I wasn't sure I liked him, or if I was even rooting for him.

I haven't been to a rave either, but I'm not ruling it out.

House, trance, techno, all the dance music you'd hear at raves (ecstasy-fueled DJ-driven dance parties), seemed to me (at first) like disco with the soul hoovered out. This music often used loops and samples, bits and pieces, from others songs. I didn't immediately embrace musicians who used parts of other songs to create their own songs. Where's the musicianship in that? It seemed like cheating at best, stealing at worst.

I've lightened up. Some techno broke through the noise. Movie scores have been adopting techno elements for years now. Daft Punk scored the 2010 Disney reboot of Tron to positive results. Sampling is everywhere in pop music too, and it's here to stay. Some of it really works. I like "Standing Outside a Broken Phone Booth with Money in my Hand" by Primitive Radio Gods, which samples a B.B. King song from 1964. When it's B.B.'s turn in the song, it's like a lovely lost memory from the the distant past, remembered again.

Moby came out of this world of raves and sampling, and for awhile he owned it. His album Play blended all of these modern mix master elements into a huge commercial and critical hit. With Play Moby busted out of the bounds of electronic dance music and he became one of the biggest stars on the planet.

Then it Fell Apart is a kind of fall and rise and fall again story. It alternates between Moby's troubled youth and his life as a star. It begins in the late 90s, the period right before Play came out, when Moby had alienated his dance music audience with his last album Animal Rights. He was playing sparsely attended gigs, and he had to use pre-recorded vocals because he couldn't afford to hire a real live singer. During this period, he was unabashedly desperate for fame, recognition, and all the women that stardom could bring. He roamed nightclubs and bars, looking to hook-up, hoping to be recognized, only to end up going home alone.

Play wasn't a success when first released, but eventually the album rocketed into the stratosphere and changed everything for Moby. Moby hit the waterslide of success head first, mouth open. His heroes, like David Bowie, Lou Reed, and Joe Strummer of The Clash, become his pals. He partied non-stop, all night long, day-after-day. Everything Moby had ever wanted in his wildest star-struck dreams was his. His claims of bedding women are Wilt Chamberlain-esque.  One-nighters were every night. Yet emotional troubles were bubbling up into Moby's pulsing nightlife like a sampled voice from a troubled past.

A big part of the problem was Moby's vast intake of alcohol and drugs. Pretty much anything went, except cocaine. Moby feared it, and it's the only drug on the platter that he consistently turned down. While reading Then it Fell Apart, I knew his aversion to booger sugar wouldn't last, and once he started using it his life would spiral and the book would get better and better. I wasn't disappointed.

By the mid-2000s, Moby's star was on the wane. Again. His follow up to Play was moderately successful, but he wasn't able to recapture the magic. As he grew desperate to hang onto stardom, Moby turned into a creature of the night. His dream was to buy a bar with a basement, so he could sleep underground like a vampire during the day, then go topside at night and consume.  When he finally succumbed to Lady Caine's siren call, things got scuzzy. In one story, he woke up in a van covered in poop. The party escalated beyond Moby's control, but now Moby felt numb to the non-stop action. His self-hatred grew, and he considered suicide numerous times.

Like a line of coke cut with baby powder, Moby balances his tales of electronic dance-music glory with a recounting of his wretched childhood. Moby serves his book well by alternating his childhood traumas with his adult excesses. You forgive adult-Moby's debaucheries because of child-Moby's destitution. Moby writes that his parents were unstable beatniks. His dad committed suicide by driving into a bridge when Moby was two. Afterwards, Moby and his mom survived on food stamps and the occasional secretarial job she could get. His mom dated bikers and participated in orgies and drug use. Moby was witness to both. Moby's mom often left him to fend for himself, and he was molested at a young age. His maternal grandparents were wealthy (his grandfather was a banker), and they were the only hint of stability in his young life.

Moby's great love was music, especially punk and New Wave. This new music, abhorred by the popular and affluent kids in his neighborhood, saved Moby and gave him an identity.  He joined bands, played real instruments, and wrote real music with lyrics. DJ'ing was right around the corner. Moby's ability to so spectacularly rise above the bad hand he'd been dealt is his most endearing quality.

A couple incidents in the book, beyond the party stories, sharpened the image of Moby for me. One is when Moby is introduced to Mick Jagger at a party Moby is throwing for the Black Crowes. Richard Branson asks Mick if he'd heard Moby's new album. Mick replied "Oh, I've heard it." Mick doesn't follow up with Moby, and you can feel the silence. Before Moby can say "Nice meeting you," Mick has moved on to talk with a beautiful woman. I wonder if Mick sized Moby up (can you believe this DJ who uses other people's music) and found him wanting. For decades Mick has seen them come, and he's seen them go. He knows talent, and he's witnessed colossal flame-outs. I wonder why Mick didn't curry favor with this new star as other older rock stars, like the late-great Bowie, did.

Moby describes an incident where he beats up a banker at a bar he owns. This story gave me pause. For all his talents and success, for all his fame, Moby will never be viewed as a physically intimidating person. Perhaps he's aware of this, and that's why the story is in the book. Moby says he was able to throw a good punch because he'd been taking kickboxing lessons. Through all the sex and drugs and music making, Moby had left out the kickboxing lessons. It made me wonder if there were other, even more mundane things like kickboxing lessons, that had been left out. Was it really all drugs and women and parties? How much of this is Moby's Rock 'N' Roll Fantasy?

Moby is a student of fame. He loves the famous. He makes no secret of it. It makes sense that his book is cultivating his own brand first, his own new chapter of being famous, facts be damned.  Moby details in the book a time when he briefly dated Natalie Portman. She denies it (boy does she deny it), and it sparked a twitter feud. She remembers Moby as being "a much older man being creepy with me when I had just graduated high school." Moby eventually backed down and apologized. He even cancelled his book tour, which I think was a mistake.

I really enjoyed this book, and I'm not part of Moby's fan base. I was wired in from the beginning. I'm not sure I believe all of it, but I have no doubt that Moby created himself from nothing, and is still creating himself in some fashion today. I went along for the ride, like the narrator in his song "Southside." I went on Moby's crime spree, as if I was reading Westlake's Parker. If you've loved any kind of popular music over the last sixty years, if you like crash-and-burns, rise and falls, modern-day myth-making, pick it up.

My novel Fast Bang Booze is available at DownAndOutBooks.Com.

You can reach me at MadxBooks@Gmail.com.