My Rules of Mystery


by Stephen Ross
Many writers have drafted up a set of "rules" for how to write and, specifically, how to write mysteries. I thought now would be a nice time to toss in my five cents on the matter. And the following list can equally apply to short stories or novels. 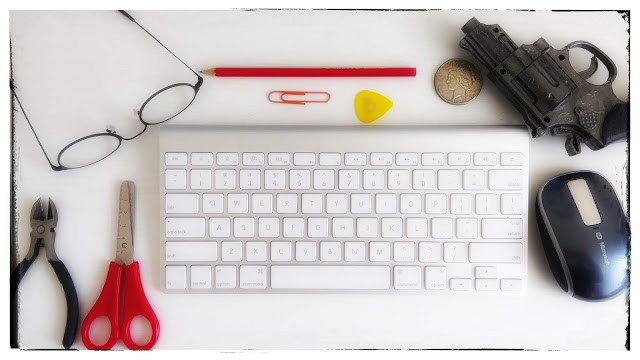 1.   First rule of mystery writing: There MUST be a mystery.

Readers KEEP reading, page after page, because they want to know the answer/solution/explanation of that mystery.

No. But the "crime" needs to be significant, e.g., a serious physical assault, the robbery of a valuable jewel, a threat to kill.

An empty chocolate wrapper (and Who ate the candy?) is a children's mystery. A severed head is an adult mystery.


3.   The mystery must be solved at the END of the story.

If you don't answer the question, and the mystery remains a mystery, the reader will throw your book at the wall.

You could answer the question in the middle, but you better have another good question to ask at that point to lead the reader through to the end; and there needs to be a good, justifiable reason for doing this.


4.   There is a difference between mystery and suspense.

A bomb that brings down an aircraft is a mystery. A passenger on a plane thinking the guy two rows ahead may have a bomb in his overhead luggage is suspense.

There are many sub categories (or genres) to mysteries, e.g., noir, cozy, police procedural, private eye, locked room. And feel free to mix these up.

If you’re writing in one of the genres (99% likely), be aware there are conventions and reader expectations for each.

Unless you truly are one of the masters of literature, mess with reader expectations at your peril.


7.   You are unlikely to be one of the masters of literature.

Don’t write a story about a private eye, or a kindergarten teacher, if you have no idea at all what is involved in those professions. Don't set a story in Latvia if you don't, at least, know the country's capitol or what language the people speak (Riga, Latvian/Russian). Don't write about Euclidean geometry, if you haven't any idea what that is. Don’t guess; research (libraries, Google, talk to people).

A good writer is a good researcher.

There are countless websites that list clichés and common and overused tropes.

Conflict, at its simplest, is the "disagreement" between a person and another (person, external force/creature). It's between protagonist and antagonist; or to put it another way:

Every work of fiction (mystery, or other) that’s ever been sold to a publisher has had conflict in it (literary fiction excluded). Conflict invites drama; it is the fuel of a story. If your story has no conflict, there will be little to engage the reader.

Subtext is not written, it is implied. It is the underneath; the feelings and intuition, the unspoken meaning.

Even a shopping list can have subtext.
Subtext is one of the writer's tools of magic.

Don’t have the hero pull out a gun and shoot the bad guy on the last page, if there’s been no mention (or any kind of reasonable expectation) that the hero is carrying a gun. Plant it. Remember your Chekhov: Gun on wall in first act. Gun fired in third act.

And plants apply to everything, not just guns. Bad guy's sneeze gives away his position in the shadows; plant his allergy earlier. Hero must rescue cat from tree, but he can't; plant his fear of heights earlier.

Without planting, events and actions will appear implausible, and your book will meet the wall.

A good writer is a good gardener.

Note: Yes, I know I'm retooling Chekhov's meaning (he was more concerned with the relevance of things in a story, i.e., don't include something, if it isn't needed later).

Feel free to mislead and misdirect your readers (let them reel in many red herrings), but always play fair. Give your readers some real "clues" as to what is going on; so, at the end of the story, they'll slap their heads and sigh, "Oh, but of course!" Give them enough clues so that they "almost" might be able to work out what is going on, before you yank the curtain back and startle the snot out of them.

Never try to "trick" your reader; your book will be thrown at the wall.

And if you end your story with: it was all just a dream, you'll hit the wall before your book does.

Wikipedia sums it up best: "In fiction, a MacGuffin (sometimes McGuffin) is an object, device, or event that is necessary to the plot and the motivation of the characters, but insignificant, unimportant, or irrelevant in itself."

The shark in Jaws IS NOT a MacGuffin.

Deadlines work well in suspense (We have to find the bomb, it explodes at midnight!!!), and they also work in mystery. A deadline focuses a story on its end/outcome and creates urgency. Think of a story as a tunnel. The deadline is the light at the end.

The detective on board the train must identify the killer before the train arrives at its destination and all the passengers disembark. An unknown man who smokes Gauloises has threatened to hijack a school bus, and it's two hours until school's out.

A TWIST ENDING is not a prerequisite for a mystery, but if you can write an unexpected and satisfying twist into your story's end, it will certainly make it more memorable; it will add another layer of icing to the cake. A twist ending completely upends and rearranges the facts and events of what's come before it.

The Sixth Sense: The child psychologist IS one of the dead people the kid is seeing. Psycho: Norman Bates IS his mother.

Pro tip: Twist endings are never arbitrarily dreamed up at the end of writing a story. They are written in right from the very beginning. Robert Bloch knew on page one of Psycho that Norman Bates' mother was dead and that Norman was the killer, and Bloch carefully hid this in the fabric of the storytelling. He didn't let the reader in on the truth until the end.

PLOT TWISTS can appear anywhere in a story and are different to the "twist ending." Plot twists change something significant about the story and/or the characters, but don't rewrite the whole thing.

Star Wars: Luke, I am your father. The Shining: All work and no play makes Jack a dull boy.

An excellent, legendary plot twist appears in Psycho, about one third of the way in. Mary Crane, the book's main character (the one we've been following and who we care about), is murdered. She's gone for good. Never comes back. Bloch was one of the masters of literature; he could get away with that kind of thing.


17.  Last rule of mystery writing: Ignore all the rules at your pleasure. Except for the first one.

So, do you have any "rules of mystery" that you live and write by?