by Libby Cudmore
In this world, you have to ask for what you want.


In some cases, you have to pick a lock and break in.


When I heard that Brian Thornton was putting together a pair of crime-themed anthologies based on the music of Steely Dan, I knew I had to be part of it. It didn’t matter that the slate was already full.

Over the past several years I have positioned myself as the Queen of the Dandom, a mighty figure in the realm of Steely Dan Twitter, and as the author of the critically-acclaimed mixtape murder mystery, this was the project I had been waiting for.


I emailed Brian this:

Brian told me he liked my enthusiasm and my Dan credentials (since then, I have seen them another four times, bringing the grand total to 10 shows, plus The Nightflyers / Dukes of September) and although he initially told me he couldn’t make any promises.

I told him that if not this one, I’d love to collaborate on another. A few days later, he responded with this:

I was ECSTATIC. If the first lesson is shoot your shot, the second is to always be gracious and forward-thinking. Being a jerk gets you nowhere.


Settling on a song was the difficult part. So many of the good ones were taken – including “The Second Arrangement” – but I wanted to go with something a little off-beat. I’ve found a lot of fans underrate Two Against Nature and Everything Must Go, so my initial thought was to write a stalker story around “Lunch With Gina.” 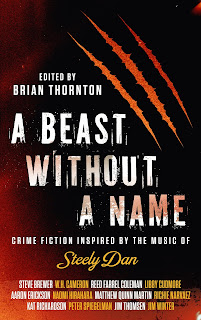 But the story wasn’t coming together, and with the deadline clock ticking down, I switched over to “West of Hollywood” from Two Against Nature. There’s a cold undercurrent of broken passion there that fascinated me, something wild that had since crumbled to dust. I based it around a pair of con artists and former lovers who reunite for one job in the Hollywood Hills.

As soon as I settled on the concept, the story came together in almost one draft. I like to think it was guided by the spirit of the late Walter Becker.


But never one to keep all the good stuff for myself, I was also able to recommend that Brian bring in my friend/fellow Steely Dan fanatic Matthew Quinn Martin in, and he wrote a devastatingly good story based on “Pretzel Logic.” Both stories will appear in the second volume, titled A Beast Without A Name, available from Down & Out Books on Oct. 28.

It never hurts to ask for what you want. Be prepared for a no, which makes celebrating that YES even better. I am forever grateful to Brian for making space for me in this anthology, and I’m really looking forward to sharing “West of Hollywood” with all of you when it comes out.
Posted by Libby Cudmore at 00:00