by Eve Fisher
I've been reading mysteries for a long time, and, like everyone, I love a good mystery series so that I can keep on reading, and reading, and reading… And rereading. And maybe watching and watching and watching. (And rewatching - my husband and I, when we run out of new stuff to watch, or it's been a bad day, often just throw on another episode of New Tricks. That or The Great British Baking Show.)

My choice in series is complicated by the fact that I don't like gore, and I want more than just non-stop action. I want complex characters, but I prefer detectives who aren't so damaged they can barely speak.


NOTE: I think detection is like any other job: you can get used to anything. Most morticians I've known are hilarious when you get them in the back room. Most of the people I've known in the judicial / law enforcement world have a good, rich, morbid sense of humor that allows them (among other things) to look at a written death & dismemberment threat and criticize its spelling, grammar, and the fact that the dumb-ass sent it from his prison cell.

But every once in a while I run across a writer whose detective is damaged, who covers crimes that are horrendous, sometimes gory, and I still love it because… Well, welcome to the world of Gianrico Carofiglio. 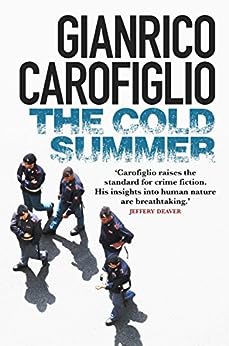 Mr. Carofiglio lives in Bari, Italy, and given the fact that he's a former anti-Mafia judge, the fact that he's alive at all is a miracle and a mystery to me. And oh, does he have stories to tell. I just finished The Cold Summer, which I gobbled down in 2 sit-downs (I do have work to do). The Mafia is all pervasive, and the central mystery revolves around a series of kidnappings, one of which ends up in the murder of a young boy. It also tells the truth that very few people want to face: you can't tell the criminals from the rest of us. I can assure you that's true.

To paraphrase Pietro Fenoglio, our protagonist, there are:
But what really impressed me about Carofiglio is that he understands hierarchy.

This is important, because a lot of life is hierarchy.
Carafiglio is a master of hierarchies, and how people learn how to work with or around them.

The glance that a lower-level carabinieri gives a captain when the captain wants him to bring in a couple who are definitely criminals, i.e., well-connected Mafia:


"When you're the commanding officer of a station on the outskirts of town, you have to find a balance between asserting your own authority and showing cautious respect for people who are prepared to do anything. When you live and work round the corner from the homes and territories of highly dangerous criminals, you have to find a modus vivendi, accept boundaries and limitations that it's hard for those who come in from outside to grasp. Theoretical authority is one thing; the real world, where different rules apply, is another."

Or when Dotoressa (Judge) D'Angelo demands the right to walk home alone without guards all around her - and everyone has to agree, but at the same time figure out a way to guard her, discreetly, so discreetly that perhaps she doesn't know about it, because a very dangerous man wants her dead. Or worse.

Or the question of why a Captain addresses everyone around him formally, full rank AND surname, when the rule is that's only for people above you. There's a whole back-story about why he does that, and it works.

If you haven't yet, check out Carofiglio. I'm about to pick up another one at the library tomorrow, and I have a feeling my ILL list is about to expand like a balloon.
Posted by Eve Fisher at 00:01