Captain Blood, famously, made Errol Flynn a star. It was the first of nine features Flynn did with Olivia de Havilland, and one of twelve with director Michael Curtiz. Flynn and de Havilland got along fine - she admitted the chemistry and spiked the rumors of a romance - but after a six-year run, ten of the twelve pictures delivering big box office, Flynn and Curtiz cordially loathed each other. My own opinion is that the pictures Flynn made with Raoul Walsh in the 1940's are better movies, by and large, the best example being Gentleman Jim, but if not for the Curtiz swashbucklers, Flynn wouldn't have made it to the A-list. Curtiz was an awful bastard, by most accounts, but he brought home the bacon. Casablanca won Best Picture, and six of his other movies got nominated. He directed Cagney and Joan Crawford to Oscars, out of ten nominations overall for his lead actors.

Andrew Sarris, whose critical opinions I generally admire, feels that Curtiz had no genuine personality, as a director, that he basically ground out sausage, and that Casablanca was a happy accident, a sort of rebuttal to to the auteur theory, where the exception proves the rule. I'd beg to differ. If you say the director is in his pictures, then okay, Curtiz made an awful lot of crap. On the plus side, along with Casablanca, we've got White Christmas and Yankee Doodle Dandy. 20,000 Years in Sing Sing, the original Wax Museum. Robin Hood, The Sea Hawk, Angels with Dirty Faces. Eddie Robinson and Garfield in The Sea Wolf. Mildred Pierce, Young Man with a Horn, We're No Angels, and The Breaking Point ain't too shabby, either. 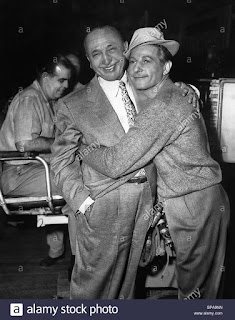 Curtiz was Hungarian.  He spoke five languages - "all of them badly," his son later remarked. Born a Jew in Budapest, he changed his birth name from Kaminer to Kertesz when he was nineteen, working in an acting troupe that crossed Europe. Kertesz was more ethnically Hungarian, in the anti-Semitic climate of the late Austro-Hungarian Empire. He began directing theater, and directed Hungary's first feature film, in 1912. He was also on the Hungarian national fencing team that year, in the Olympics. When the war came, he served in the army. He was wounded, and invalided out. He went back to the movies, and spent seven years learning the trade. He caught the attention of Warner Brothers in 1926, and by the time he went to Hollywood, he'd already made sixty-odd pictures.  He was 39 years old.

This story, familiar in some ways, is framed by larger political imperatives, Kati Marton puts it in context with her terrific book The Great Escape (2006), subtitled Nine Hungarians Who Fled Hitler and Changed the World. The nine are Curtiz and Alexander Korda, Robert Capa and Andre Kertesz, and Arthur Koestler, for the arts, with Leo Szilard, Edward Teller, Eugene Wigner, and John von Neuman, for the sciences. I highly recommend it. 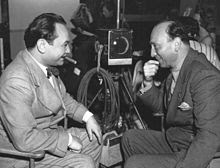 I'm belaboring the point, which is that where Andrew Sarris sees Curtiz spreading himself too thin, I see industry, ambition, restlessness and insecurity. Sarris regards him as sausage-maker - and in fact Warners maintained two individual film crews for Curtiz, one for the picture he was actively shooting, one for the picture he was prepping next - and I think it reveals an obsessive. There's for example the story that Curtiz grabbed for a notebook to write down a sudden idea, forgetting that he was driving at the time, and ran himself off the road.

I see Curtiz the refugee, the stranger, running in place to catch up, afraid something or someone is catching up with him. The upstart Jewish kid from Budapest, trying to break into pictures, and never quite gaining the confidence it won't all be snatched away. Curtiz in high dudgeon, with David Niven the target: "You think you know fuck everything and I know fuck nothing, but let me tell you, I know fuck all." This is not a guy who thinks he stands on rock, he's afraid he stands on sand. 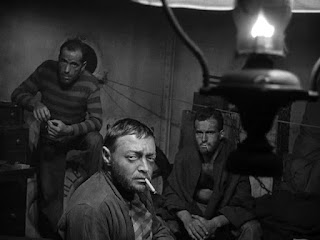 Sarris admits Curtiz has vigorous technique, but he doesn't believe Curtiz has a theme. I couldn't agree less. No, Curtiz isn't Walsh, he doesn't have the muscularity, and he for sure isn't Anthony Mann, another exile, who inhabits the true fury of separation, but what Curtiz brings to the game is an intimacy, set inside the bigger canvas, a larger scale. In his better pictures, Curtiz reveals himself to be trapped, isolated, estranged. Bogart, in Casablanca, says, "Nobody ever loved me that much."
Posted by David Edgerley Gates at 00:00

I remember in film school one of the professors talking about Curtiz and saying he had no consistent style and wasn't an auteur. But I think there's been a reevaluation of his career recently and people are starting to think otherwise. Either way, if he's making sausages the sausages are awfully tasty, starting with Casablanca, my favorite movie, and all the others you mentioned, David.

I've seen an awful lot of Curtiz movies without knowing it, but a lot of them - such as Captain Blood - I saw as a kid, and I didn't pay any attention to who was directing. I agree with Paul - very tasty sausages, and a few classics.

Now that's some interesting information. Thanks for adding to my education.

I'm so embarrassed. The names Errol Flynn and Olivia de Havilland, I knew. I do enjoy B&W filmes, but I knew none of the rest. I'm glad to be educated.