Spooky Writers, Forgotten Graves, and Vengeance from Beyond the Tomb 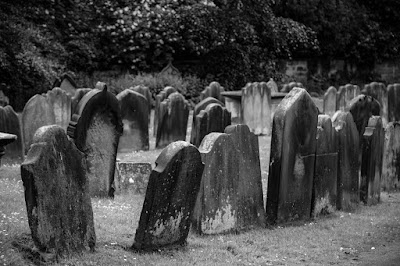 It's that time of year, when Pumpkin Spice becomes a thing, and sketchy Halloween costume shops take over even sketchier strip malls.  As the fall chill settles, one starts to wonder: Are those spookiest of writers, Edgar Allen Poe and Ambrose Bierce, truly in their final resting places? Like, tucked away, with at least six feet of hallowed earth separating them (the dead) from us (the living)?

I can offer you no such surcease of sorrow.

Halloween, based on the Celtic Samhain (which itself comes from Chthulu-era pagan rituals), is the night when the dead come knocking. Some for treats, some for tricks, and some for righteous beyond-the-tomb payback.


Edgar Allan Poe and Ambrose Bierce specialized in tales where death wasn't always a sure bet. Both left this mortal coil with scores to settle. And there is grave uncertainty as to where either is interred.  These are three good motives for any unrestful spirit to don a hockey mask (or William Shatner mask, or fedora and sweater combo or, ok, there are a lot of costume options), grab a machete (again, options), and come calling this Halloween. One would hope that enough post-mortem praise has been heaped on Poe and Bierce to put contented smiles on their rotting faces; to sway them to let bygones be bygones.

Don't count on it.

If there's anyone who'd warrant vengeance from beyond the grave, its Edgar Allan Poe. The means are questionable, but the motives are as clear as a gold bug on a black cat.

First, Poe's death is shrouded in mystery. I don't believe he ended up in that Baltimore gutter wearing someone else's clothes just because he was at the tell-tail end of a bender. I like the cooping theory. In those days of rampant voter fraud (not to diminish our own era of Russian meddling), travelers were kidnapped, cooped up in rooms (hence "cooping"), and force-fed booze and drugs. A pretty sweet deal for some, but deadly for others. The blitzed-out saps were coerced into voting repeatedly at different polling stations. Their clothes were switched so they wouldn't be recognized.

Poe was found near a polling station, out of his head. He was wearing farmer's clothes, including a straw hat. There's no way that The Godfather of Goth cavorted amongst the literati of Virginia and New York in a straw hat like some Leatherstocking Tales reject. This man was cooped.

Second, Poe's reputation was sunk by Rufus (rhymes with doofus) Griswold, a third-rate literary rival. In popular culture Poe is often seen as a drug addicted outsider who mirrored the creepiness he wrote. Actually, Poe was a respected writer and editor, a literary celebrity who made a lot of his money in live appearances. He is probably the first American writer to live solely off his writing. Rufus Griswold was a hacky "anthologist" and the target of one of Poe's biting you'll-never-live-this-down criticisms. When Poe kicked off, punk Griswold saw his chance for cowardly payback.

Griswold wrote a scathing obit of Poe for the NewYork Tribune that was widely reprinted. Next, Griswold conned his way into being Poe's literary executor. He wrote a fake biography of Poe that appeared in Poe's anthologies.  It portrayed Poe as an addict, gambler and army deserter. This false image of Poe as an evil, pathetic genius stuck.

Lastly, in 1849, Poe was dumped into an unmarked grave in the Westminster Burial Ground in Baltimore. It wasn't until decades later when a succession of grand headstones attempted to mark the great man's final resting place. In a scene reminiscent of Poe's fiction, the city of Baltimore repatriated Poe's corpse to a more scenic view. The sloppy handling of Poe's remains gave rise to conspiracy theories.

In 1978, the Maryland Historical Magazine published Charles Scarlett, Jr's "A Tale of Ratiocination: The Death and Burial of Edgar Allan Poe." Scarlett proposes that through a series of grave-marker mix-ups, Baltimore botched Poe's reburial. Instead of digging up Poe, Baltimore disinterred the remains of Phillip Mosher, a young fallen soldier from the War of 1812.  Scarlett presents a pretty interesting theory.

George W. Spence, a sexton who oversaw the first exhumation of Poe, said that he lifted up Poe's skull, and "his brain rattled around inside just like a lump of mud." Brains rot pretty quickly. Bullets don't. If Phillip Mosher was killed in the War of 1812 by a shot to the head, the hunt for Poe's corpse continues.

Around the time when the search for Poe's grave began, a young soldier and Poe fan was facing real-life horrors that rivaled those that Poe wrote about.

I'm a film and TV editor, and I cut a horror flick that stars Michael Parks (lead on the ultra-cool TV series Then Came Bronson) as cantankerous author Ambrose Bierce. In it, Bierce falls in with outlaws, battles vampires, and eventually joins the ranks of the undead. That's one way to explain Bierce's mysterious disappearance.

Bierce, most famous for The Devil's Dictionary and his short story "An Occurence at Owl's Creek Bridge," was a Civil War vet who saw the bloody horrors of war up close. Bierce hilariously said war was "God's way of teaching American's geography," but he found little humor on the battlefield. He fought on the Union side in hellish battles at Shiloh and Kennesaw Mountain. His writing is imbued with those experiences.  Bierce suffered a head wound at Kennesaw Mountain, which some claim was the cause of his bouts of booziness and unmatched orneriness.

In his lifetime Bierce was known as a San Francisco journalist, but his lit legend is based on his short horror stories with surprise endings. "An Occurrence at Owl's Creek Bridge" is one of those works of fiction that has been repeated so often, and in so many mediums, that many are unaware of it as the source. It's the story of a Civil War Southerner about to be hung from a bridge. He is dropped off the side, but the rope breaks. The Southerner escapes to his home. As he's running into the arms of his wife he's stopped by a heavy blow to his neck. In the most famous of Bierce's twist endings, we learn the man imagined the escape during the time between his fall from the bridge and the rope breaking his neck.

In 1913, at the age of seventy-one, Bierce travelled by horseback, first to visit Civil War battle sites, then to Mexico. His stated aim was to report on Pancho Villa and the Mexican Revolution. Many claim Bierce was running away from old age, seeking a one-way ticket to an adventure that would carry on into the after life. His last postcard was mailed from Chihuahua City, Mexico. Bierce was intending to ride out with Pancho Villa. What happened next is shrouded in mystery, but according to numerous eyewitnesses, Bierce died many deaths.

Bierce was killed at the Battle of Ojinaga, fighting the Federales alongside Villa.

Bierce was only wounded at Ojinaga, but eventually succumbed to his injuries at the Marfa refugee camp.

Bierce was executed by a Federale firing squad at the desert village of Icamole.

Bierce was executed by a Federale firing squad at the desert village of Sierra Mojada.

Others believe Bierce offed himself somewhere in the Grand Canyon, one of his favorite hangouts. There are no eyewitnesses, reliable or otherwise, to support this claim.

At least Poe got a coffin and a handful of mourners. If Bierce died in battle, he was likely dumped in a mass grave and burned. Death by firing squad meant he got his own hole in the ground but none of the other trimmings. There's a small monument for him at Sierra Mojada, but the remains of Bierce are nowhere to be found.

I'd say the best way to placate Poe and Bierce this Halloween is to read their works. You don't even have to read the scary stuff. Poe's tales of ratiocination starring amateur sleuth C. Auguste Dupin are a must for any fan of crime fiction. Bierce's The Devil's Dictionary holds up as a manual of biting-though-meaningful sarcasm.

You may want to read some Shakespeare, too. In 2016, archaeologists examined Shakespeare's grave using GPR scanning. The study showed that the grave was disturbed after Shakespeare was buried. GPR images also revealed that Shakespeare's skull is missing.

I'm Lawrence Maddox. My latest novel Fast Bang Booze is available from Down and Out Books (downandoutbooks.com). You can contact me at Madxbooks@gmail.com.