by David Edgerley Gates
The Caine Mutiny put Herman Wouk on the literary map, among the war writers Norman Mailer, James Jones, Gore Vidal, John Horne Burns, and Irwin Shaw. Wouk and Shaw were the most commercially successful, by far, which drew a certain amount of snobbish condescension. I'm a big fan of Irwin Shaw's, as it happens, but today it's Herman Wouk, who died just this week past. 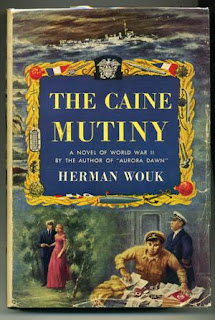 The Winds of War was published in 1971, War and Remembrance came out in '78, and somewhere in there I remember my dad and a friend talking about Wouk's authenticity. Both of these guys were Navy vets, WWII, and while they admitted it was a little convenient that Victor Henry or somebody in his family circle managed to be present at so many historical turning points - Roosevelt, Churchill, Hitler, Stalin, and a host of lesser lights, all had cameos - they were impressed by the fluency and momentum of the novels, the gathering darkness, the furious consequence. They thought Wouk had gotten it right, that the books were absolutely convincing. (My dad thought Catch-22 was pretty accurate, too, if for different reasons.) 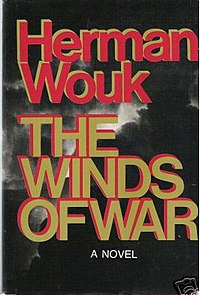 For me, that was a strong recommendation, and when I got around to reading The Winds of War not long afterwards, the fact that it was so resolutely old-fashioned worked very much in its favor, and I read War and Remembrance because I wanted to see how the story came out. My dad used to joke that he and his crew must have seen Part V of Frank Capra's Why We Fight a dozen times, but he never found out how it ended. We know now that they Allies beat Hitler and the Japanese, but Wouk is skillful enough that we want to know whether Natalie and her uncle Aaron survive the Nazis. You could do worse as a writer. 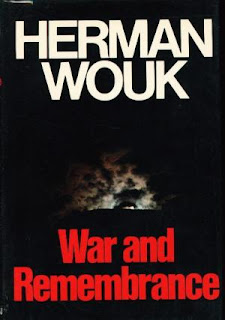 Wouk's model is of course Tolstoy; his title gives it away. It might be worth pointing out that Tolstoy's title in his native Russian is Vojna i Mir, and the second word, mir, means both 'peace' and 'world.' You could almost translate it as Repair, or chaos made whole again. There's a lot of this in Wouk. The narrative and moral arc of War and Remembrance is return. We're delivered from an unnatural order, entropy or chaos, its power over us denied, the balance restored. You could almost call it biblical unity, if not for being reminded how little comfort history is. 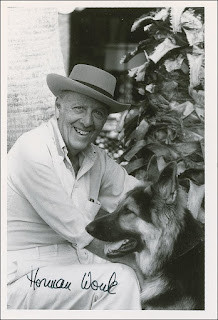 The best obit was the Hollywood Reporter, and there was an extraordinarily clear-eyed piece by Anna Waldman in the New York Times. Wouk was a guy who deserves consideration.