by Janice Law
Although I am as fond as anyone of up-to-date contemporary tales, “ripped from the headlines” as one of my old editors used to say, I’m also beginning to quite like historicals. Lets face it, detectives out and about and asking questions and using their little grey cells have it all over scans of CCTV footage and rows of white-collar coppers studying their computer screens.

Naturally, the historical mystery genre has its difficulties as well, presenting a tricky balance for the writer. From writing a number of novels set in the past, I discovered that readers enjoy only so much difference and strangeness. Local color, odd costumes and odder customs are  OK, so long as the hero and heroines have basically contemporary ideas and attitudes. I learned this the hard way with All the King’s Ladies, a novel about the Affair of the Poisons at the court of Louis XIV.   Only belatedly did I realize it would probably have sold a great many more copies if the king’s mistresses had been more romantic creatures, instead of the cold-eyed business women they were in reality.

So I was pleased recently to discover Frank Tallis’ series of Vienna mysteries, featuring the young doctor (and Freud disciple) Max Liebermann and his friend, Detective Inspector Oskar Rheinhardt. The books hit a good balance between historical accuracy and modern thinking. The result is a detailed portrait of cosmopolitan pre-WWI Vienna in the reign of Emperor Franz Joseph. Tallis knows his cultural history, especially music, and has done his research on the tangled politics, secret societies, and threatening undercurrents of what was on the surface, a glittering and progressive capital.

His appealing main characters exhibit a distinctively contemporary sensibility. It is not too surprising that Amelia Lydgate, blood expert and medical student is alert to the misogyny of the medical profession. But it is more surprising that Liebermann, fascinated by Freud’s ideas, should apply them with many critical reservations, especially with respect to his female patients. Or that Rheinhardt, a
member of the conservative police force, should be so open to what amounts to a female forensics expert. Totally plausible historically? I doubt it, but it makes them fun to spend time with.

Tallis has other strengths beyond careful and well-written historical research and good detectives. A clinical psychologist, he puts his medical and scientific knowledge to work to construct elaborate plots and ingenious modus operandi for both his cops and killers. A Death in Vienna features a locked room puzzle – with a locked box puzzle inside. Vienna Blood offers a serial killer with what, in symphonic terms, might be called a program.

While the murders themselves are quite far up on the gruesome scale, the complexity of the plots and the ingenuity of the solutions are in Agatha Christie territory – an interesting combination to say the least.

The social and psychological settings for these mysteries are also carefully done. Liebermann is a member of the prosperous Jewish bourgeoise, comfortable, well-educated, cultured. Although quite aware of a pervasive anti-Semitism, he is personally protected by his status and abilities and optimistic about the future. Interestingly, his father Mendel, a factory owner less educated and assimilated, is more perceptive about what are destined to be increasingly toxic and dangerous political currents. 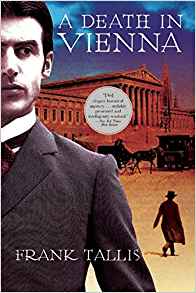 The series of what are now called the Liebermann Papers began in 2006 and have now run to eight novels; the most recent, The Mephisto Waltz, came out this year. They are well worth a look.
Posted by Janice Law at 00:01