The Things We Leave Behind

In this, the age when fantasy rules, when people tiptoe around discussion of TV shows (Game of Thrones) and movies (Avengers: Endgame) for fear of revealing "spoilers" about either of these juggernaut entertainment franchises, I've had a tangentially related subject on my mind.

But never fear. No spoilers here.

And it has to do with books, not the visual arts.

Let's just pause for a bit, give my readers (BOTH of you!*rimshot*) a chance to heave a sigh of relief.

I don't have much room on my dance card these days for either science fiction or fantasy. Ironic, I suppose, because most of what I read while cutting my teeth on literature beyond picture books was science fiction and fantasy.

Now, as a kid, I read everything I could get my hands on: high adventure such as Robert Louis Stevenson's Treasure Island, C.S. Lewis' Narnia chronicles, The Hardy Boys, Encyclopedia Brown, lots and lots and lots of history. But it was Burroughs' stuff that really turned my crank.

I read every one of his ninety-one published novels (save the three or four, such as The Efficiency Expert, The Girl From Farris's, and Marcia of the Doorstep which had been out of print for decades when I was first delving into Burroughs' oeuvre during the mid-1970s): His Tarzan novels, his Barsoom series, his Venus novels, his Earth's Core series, and standalones such as The Mucker (and its sequel, The Return of the Mucker–even though I had no idea what a "mucker" even was!), The Land of Hidden Men, and posthumously published books such as Beyond the Farthest Star and  I Am A Barbarian.

For me, discovering Burroughs was largely a matter of timing. His work had begun to go through something of a renaissance during the paperback revolution of the 1950s and 1960s. as was the case with the work of so many of his peers who wrote for the pulp magazines which churned out new stories, sometimes whole novels, at an astonishing rate during the first three decades of the twentieth century. And publishers such as Ace and Ballantine were eager to cash in, commissioning vivd, exciting cover art from such top notch fantasy artists as Frank Frazetta, and marketing his books in such a way that mall bookstore chains such as B. Dalton (remember them?) would place them right in front of the likes of me: kids out looking for lurid tales of derring do, lost civilizations, monster men, damsels in distress, and, of course, a seemingly inexhaustible parade of "noble savages."

Burroughs, a failure at many things in his adult life, found his moment at the age of thirty-seven when, in 1912, The All-Story Magazine serialized his first fiction under the title, "Under the Moons of Mars." When later published in book form the publisher changed the title to A Princess of Mars. This book introduced Captain John Carter, a Civil War veteran from Virginia, who found himself whisked away from a cave in the Arizona desert to the Red Planet. 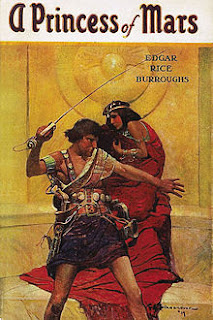 Once there Carter's adventures ran true to what would become Burroughs' standard formula: endowed by Fate (in Carter's case, Fate took the form of the lesser gravity of the planet Mars) with Herculean strength, the hero would face a series of challenges, including, in no particular order, savage beasts, scheming villains, the elements, and, of course, a beautiful woman with whom he would fall hopelessly in love, usually at first sight, and through some silly misunderstanding, would not discover until somewhere near the end of the book that the lovely maiden requited his passionate feelings.

Later that same year Burroughs introduced his most famous character, John Clayton, an English peer of the realm, better known as Tarzan of the Apes. Orphaned at birth, raised by apes (and not, as Burroughs–who seems to have been largely ignorant of even the basics of zoology–insisted over and over, gorillas), Tarzan grew up to get the girl (An American preacher's daughter named Jane Porter), reclaim his birthright (that's "Lord Greystoke" to you, thank you very much.), and spend his time swinging through the jungle, finding (and fighting) lost civilization after lost civilization, and even being made chief of an African tribe.

And of course Tarzan was a sensation which quickly morphed into something beyond what Burroughs intended (the movies, the merchandise, Johnny Weismuller famously grunting, "Me Tarzan, you Jane"in film–and speaking of film, none of them were anything like the books. Go figure.). And he made Burroughs (and his heirs) trunkloads of money.

And Burroughs has never really left us. In the past decade, Hollywood invested vast sums of money into two film reinterpretations of his two most famous characters: 2012's much-maligned John Carter, which killed more careers at Disney than a Thark with a radium rifle, and 2016's awful The Legend of Tarzan, which also tanked, although not as badly (I credit the incredible Margot Robie, who played Jane.).

In another fitting irony it was John Carter which brought me back to the Burroughs books. The movie is, in a word: terrific. The first live action film directed by Andrew Stanton (of Wall-E fame), and a screenplay credited to (among others), one of my favorite novelists, Michael Chabon. It starred the underrated (and relatively unknown) Taylor Kitsch as the title character and the unforgettable Lynn Collins as the aforementioned"princess." But John Carter never really had a chance. The film ran afoul of a marketing department leery of a film with the word "Mars" in the title (Blame Mars Needs Moms. I do.), and whose upper echelon decision makers had never worked on selling science fiction before.

So it tanked, the Oscar-nominated score (courtesy of Michael Giacchino) and a superb supporting cast which included Mark Strong, Willem Dafoe, James Purefoy and Ciaran Hinds notwithstanding.

I saw it in the theatre, and loved it. I came away from the experience thinking of what a love letter the film was to Burroughs' work: how Stanton had worked so hard to bring so many aspects of Burroughs' Martian books to life: the look, the feel, the red skin of the Martians, the four-armed, green-skinned Tharks, the fliers which served as air "navies" in Mars' thin air. Great characters like Tars Tarkas and a much more fleshed out princess Dejah Thoris. He really nailed it.

It inspired me to delve back into Burroughs' canon: books I had not re-read in decades. 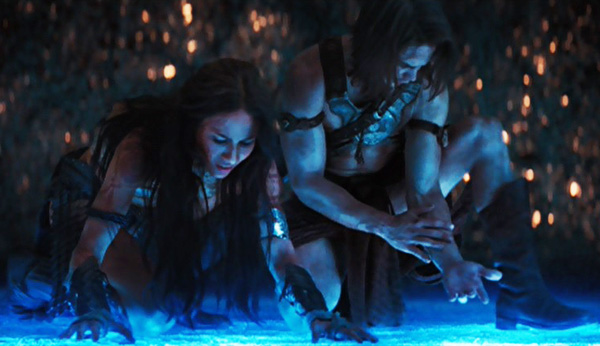 I was maybe twenty pages into A Princess of Mars, when it hit me. Edgar Rice Burroughs was an imaginative guy, and a pretty decent storyteller, but he was a lousy writer. As it turns out, Chabon and Stanton not only paid homage to Burroughs' work, they vastly improved on it.

What's more, his stuff is dated. Burroughs was a man very much of his time. And his time bespeaks the sort of casual racism that was entirely lost on a pre-teen and early teen-ager from whitebread (no pun intended) eastern Washington, and is terribly glaring to my more cosmopolitan fifty-four year-old eye nowadays.

Put simply,  I now find Burroughs' portraits of blacks, Asians, Arabs, Latinos, and so many other non-white peoples downright painful to read. I'm not saying he was anything like, say, Richard Wagner. But Burroughs carried all manner of received, unconscious biases around with him. Born in 1875, he made his first protagonist a Confederate soldier, and would have been forty when D. W. Griffith's Birth of a Nation–racist ending and all–hit the theatres in 1915.

This, more than the paper-thin characters and the repetitious plots, pretty much overpowers the charms–the often sly humor, his occasionally insightful meditations on the ruinous nature of the two world wars through which he lived (the second as a war correspondent in the Pacific) and the sheer inventiveness–his works still possess. Fifty-four year-old me wants something more sophisticated, more aware of the humanity (including the failings) of the author's characters.

But I still feel I owe the guy something. His work took me on flights of fancy I'll savor for the rest of my days. And it was Burroughs, and another pulp-era author whose works I've "outgrown"–Conan creator Robert E. Howard–who taught me how to write fight scenes.

So I'll honor the memories, and I'll enjoy repeated viewings of the unfairly maligned (and poorly titled) John Carter. Especially for the sword-wielding Lynn Collins. 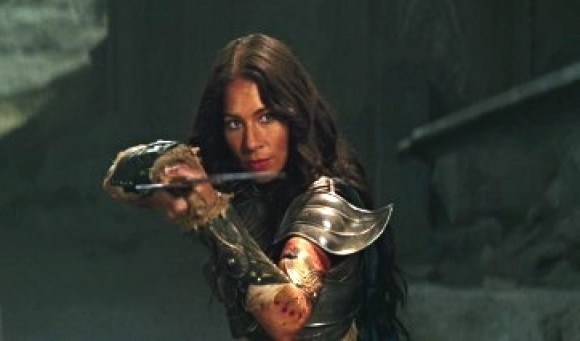 But I won't be cracking the books themselves again.

How about you? Feel free to weigh in in the comment section, and tell us which books from your childhood have or have not stood the test of time for you, and why?

Posted by DoolinDalton at 02:38