by Paul D. Marks
In the tense opening of my novel Broken Windows, a young woman—Susan Karubian—drives up the windy roads of the Hollywood Hills. She parks. She walks to a huge structure on the side of the mountain. Climbs it. Contemplates a moment. Then jumps to her death from the Hollywood Sign. We’re left to wonder who she is and why she does what she does. 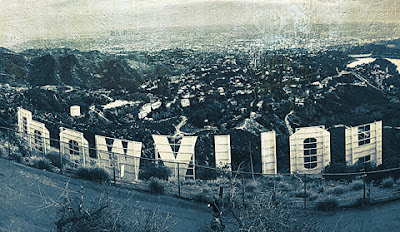 But she isn’t the first person to jump to her death from the Sign. Susan is loosely based on Peg Entwistle. Entwistle came to Hollywood in 1932 to fulfill her dreams of becoming a star. When that didn’t happen she became the only known person to have jumped to her death from the Sign…until Susan Karubian in Broken Windows. But Susan has more reasons than simply not fulfilling dreams of stardom for her jump into infamy in 1994, when the novel takes place.

Here’s some excerpts from the opening of Broken Windows:

The nonstop rain of the last couple weeks had broken. The view from up here was incredible. You could almost see Mexico to the south and the Pacific glittering in the west. The city below, shiny and bright. Pretty and clean from up here. A million doll houses that reminded her of childhood, playing with dolls and making everything come out the way she wanted it to. Little toy cars down below, scooting back and forth. Swarms of ants scurrying this way and that on important business. Oh yeah, everyone here had important business all day and all night. Everyone but her. She gazed down at Los Angeles on the cusp of the millennium. The place to be. Center of the universe…

...The city glowed, shimmering with hope and desire and people wanting to make their dreams come true. She knew this, because she was one of those people…

…If she couldn’t be famous in life, she would be famous in death. But she’d make her mark one way or another. She hoped her fall from grace would be graceful, even if her life hadn’t been.

I’d like to say that the idea for this just popped into my head ’cause it was a cool thing to do – a great hook to open the book. But I’ve always been fascinated by Peg Entwistle and her jump into infamy. One of the themes in my writing that I revisit from time to time is how Los Angeles is the place people come to fulfill their dreams, to start over, to become a new and different person. How Los Angeles is on the edge of the continent and if you go too far you fall into the Pacific, lost to the world forever, at least metaphorically speaking. How many – maybe most – of the people who come here with Big Dreams never achieve them. They become hangers on, wanna-bes and also-rans. Dejected and Depressed. I think Peg Entwistle was one of those people. 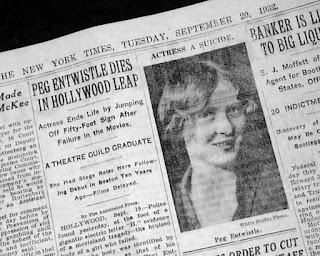 Peg (I hope she won’t mind my being informal with her) was born February 5, 1908 and died on September 16, 1932 in that famous jump. She was born in Port Talbot, Glamorgan, Wales, as Millicent Lilian Entwistle. Peg and her father – it appears he’d divorced her mother – emigrated to America, landing in Cincinnati and then New York. Her father died in 1922 and Peg began studying acting in Boston.

Apparently, in 1925 a young woman saw a seventeen year old Entwistle play the role of Hedvig in Ibsen’s The Wild Duck. After seeing Entwistle in the play, that young woman told her mother, “I want to be exactly like Peg Entwistle.” And ultimately Bette Davis surpassed her inspiration.

Eventually, Entwistle found work on Broadway, performing in several shows. And in 1927 she married actor Robert Keith, father of actor Brian Keith of Family Affair and other TV and film fame. So she became his step-mother for a time. Entwistle and Keith eventually divorced and Entwistle moved west to stake her claim in Hollywood during the Great Depression.

She appeared in several plays, but in only one movie Thirteen Women, starring Myrna Loy. 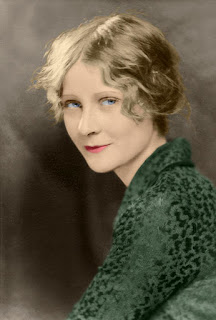 From here the facts get a little murky. But apparently, despondent over not making it in Hollywood, she made that infamous climb to the top of the “H” in the Sign and jumped into history.

Her suicide note read, “I am afraid, I am a coward. I am sorry for everything. If I had done this a long time ago, it would have saved a lot of pain. P.E.”

Find a Grave says, “Today she is remembered for being an example of the lost aspirations of many who go to Hollywood to become actors or actresses. Ironically, the day after her death, a letter arrived at her home, offering her the lead role in a stage play about a woman driven to suicide.”

Whether this letter is for real is a matter of dispute. But either way, it says everything about people’s quest for fame and their obsessive desire for their guaranteed (by Warhol) fifteen minutes in the sun and in the news.

White Heat -- Shamus Award-Winning mystery-thriller -- is a BOOKBUB Featured Deal on Sunday, May 19th. You can get the E-book for only $0.99.  https://tinyurl.com/y5oq3psq 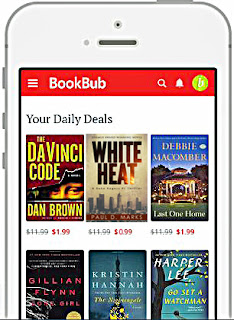 New May issue of Mystery Weekly is out. And I'm honored to have my new story The Box featured on the cover. Hope you'll check it out. -- This link is to the Kindle version, but there's also a paper version available. 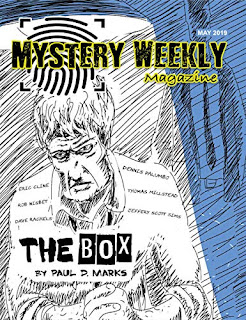