In Part One, I talked about how legendary Japanese director Akira Kurosawa, known to many for his dramas, Shakespearean adaptions and samurai films, also made significant contributions to the broadly-defined crime film genre. I highlighted and provided links to two excellent films from the late 1940’s:
Drunken Angel (1948), the first Yakuza (gangster) film after World War II, and Stray Dog (1949), an early police procedural and the ancestor of the buddy cop film. Both films paired Kurosawa’s favorite actors Toshiro Mifune and Takashi Shimura, showcased the director’s emerging talent and explored the gritty underworld of postwar Tokyo from a Japanese point-of-view.

We continue now into the 50’s and 60’s, Kurosawa’s prime, for three more crime films featuring Mifune and Shumara. Our first is a doozy. 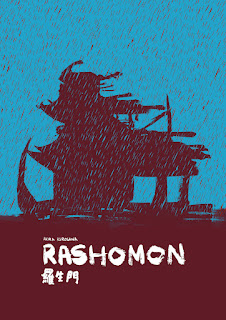 And then there was Rashomon.

While it was considered too Western for many in Kurosawa’s homeland, Rashomon is arguably the most influential Japanese film worldwide of any genre. It is inarguably one of the most revolutionary crime films ever made.

Based on the 1922 Ryūnosuke Akutagawa short story “In a Grove,” Rashoman features a samurai among its principle characters but this is no samurai film. Instead, Rashoman is a period piece psychological thriller set in eighth-century Japan.

In a framing story, several people take shelter from a rainstorm beneath a ruined city gate in Kyoto. (The famous gate is called “Rashomon”, hence the title.) One of the stranded people, a woodcutter played by Shimura, tells the others via a flashback how he discovered the dead body of a samurai (Masayuki Mori) in the woods. Shimura then details the ensuing trial he attended where the three persons involved in the murder give testimonies: the samurai’s self-admitted killer (the bandit Tajōmaru played by Mifune); the samurai’s wife (Machiko Kyō), who was raped by the bandit but what she did afterwards remains open to question; and lastly the dead samurai himself, who speaks channeled through a medium. All three give conflicting accounts of events in that wooded grove and the actions that lead to murder. In addition to the killing, there is a question of shifting motivations and loyalties by all parties as result of the rape. And the mystery of a missing jeweled dagger.

As the bandit, wife, and the samurai all give their sides to the story, Kurosawa reenacts each version for the audience to see. We are challenged to find reality within incompatible vignettes and ask if such a thing as truth exists. We ponder each speaker’s motivations, wondering at lies and self-delusions told to an unseen judge (indeed, the audience is the surrogate judge). We weigh evidence and probabilities and strain to reach a definitive conclusion. Is there one? And only one? That is the mystery, art and source of enjoyment in Rashomon.

Kurosawa adds fine touches throughout the film. The wife, dressed in a white veiled gown and bathed in radiant forest sunbeams, is one of the most beautiful images put to film. When the bandit sees her, we feel his lust, even as we are abhorred by his actions. In one flashback, told by the victor, two combatants engage in a swashbuckling sword fight worthy of an Errol Flynn film. When an impartial party describes the same scene, Kurosawa shows the combatants as terrified cowards, clumsily hacking at each other, the winner victorious through sheer luck rather than skill. One account is fantastic, the other realistic, but which is true? Or perhaps neither are?

Towards the end, a witness comes forward to present a fourth account of events. But will the witness solve the puzzle for the audience or only muddle the truth further? 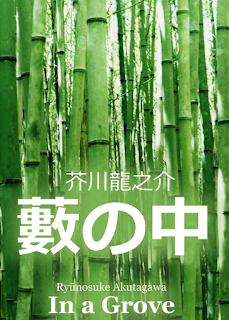 So influential was this film that it has entered the English-language lexicon. “A Rashomon” or the “Rashomon Effect” is creative jargon (particularly in film or television) for a story told multiple times from various points of view. Even if you have not seen the original film, it is likely you’ve seen or read a work that uses this device. Maybe the writers reading this have knowingly or unknowingly used the “Rashomon Effect” in their own work? If so, please mention it in the comments below.

Historically-speaking, the release of Rashomon was a watershed event for Japanese cinema. Prior to and during World War II, there was little exposure to Japanese film outside their country. After Rashomon won the Golden Lion at the 1951 Vienna Film Festival, it was released with subtitles throughout America and Europe, going on to win Best Foreign Language film at the 1952 Academy Awards (a first for any Asian film), Best Director for Kurosawa from the National Board of Review and numerous other awards. In its wake came other Japanese films, including Kursoawa’s own masterpieces like Ikiru (1952), The Seven Samurai (1954) and Throne of Blood (1958). Directors as varied as Woody Allen, Robert Altman, Ingmar Bergman, and Francis Ford Coppola all count Rashomon among their favorite films.

As was much of Kurosawa’s work, Rashomon was remade as Western. 1964’s The Outrage stared Paul Newman, Laurence Harvey, Claire Bloom, William Shatner and Edward G. Robinson. The original is better.

All Japanese films published before 1953 are in the public domain, so Rashomon can be viewed for free here. (This free link is not a particularly clear print and I would recommend to those genuinely interested to stream a pristine version of this beautiful film from Amazon for less than $4.00 here.)

You can also download an English-language translation of Ryūnosuke Akutagawa’s short story “In a Grove” for free here.

If you’ve seen Rashomon, please use the comments to tell us which of the four accounts you believe and what you think really happened in those woods. 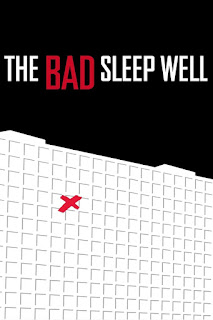 We return to the then-present day for a film noir with a plot that is both complex and difficult to discuss without spoiling things. Speaking simply, it is the story of Koichi Nishi (Mifune), a man who marries the boss’s daughter, Yoshiko (Kyōko Kagawa), at a large Japanese land development company in order to expose corruption and murder (and more – but that would be telling) there. Shimura plays Moriyama, one of the executives who comes into conflict with Nishi’s would-be whistleblower. Nishi has an especially difficult challenge getting confessions, as anyone who is even partially exposed has a penchant for rather suspicious suicides (One man tries to jump into an active volcano!)

Like all true noir, no one is completely good. Nishi may be determined to expose the truth, but he’s all too willing to use his bride’s affection as a tool to get access to whom and what he wants. This is doubly tragic for Yoshiko, as she not only loves Nishi, but is physically handicapped, and it is implied she had a difficult time finding a husband. Now, the one she has wants to use her to destroy her father and his company. Layered characters abound.

Kurosawa’s visual touches are as ever strong with sound and shadow used to chilling effect hinting at horrors just off screen. While considered one of his finest films, The Bad Sleep Well is perhaps not Kurosawa’s most accessible. The twenty-minute wedding reception that begins the film is deliberately paced and gives no indication of the thriller that follows. And the ending is very dark. Noir aficionados are known to love it, but general audiences are more divided.

As it was released after 1953, The Bad Sleep Well is not in public domain, so I have no link. You can, of course, stream it or purchase a DVD with English subtitles at Amazon or similar venders 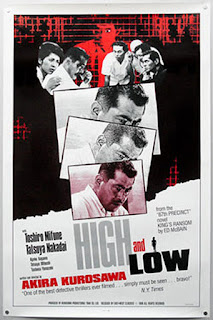 Loosely based on the Ed McBain novel King’s Ransom, Mifune stars as a shoe-manufacturing executive named Gondo. Gondo has personally borrowed millions to prevent a hostile takeover of the company by rival executives who wish to oust him. Minutes before he is to purchase the stock that would secure his position, he receives a phone call by someone claiming to have kidnapped his son and demanding the borrowed money and more as ransom. It is soon discovered the kidnappers have errored. Gondo’s son is safe but the boy’s playmate was taken by mistake. Undeterred, the criminals insist on the money from Gondo or they’ll kill their young captive. What ensues is a gripping drama where Gondo wrestles with his conscious. Pay the ransom, and he’ll lose company, position, home, and find himself jobless while millions in debt, the very existence of his family in jeopardy. Refuse to pay and an innocent boy dies, a young life extinguished because someone held a grudge against Gondo. What would you do?

While this crisis of conscience plays out in Gondo’s manor on a hill (the “high” of the title), Inspector Tokura (played by a young Tatsuya Nakadai) attempts to track down the criminals, his investigation taking him into the “low” of Tokyo’s slums and drug dens. The investigation is riveting, a surprisingly modern police procedural where the inspector uses both forensic evidence and mind-games against the kidnappers planted in the media to entrap his targets. Shimura returns in a minor role as Inspector Tokura’s superior.

Kurosawa’s visual flourishes remain ever-strong in High and Low. A black-and-white film, he inserts a touch of color at a key moment to great effect. And a scene in a claustrophobic alley overrun by zombie-like heroin addicts is as chilling as anything George Romero would put to film years later.

One of my personal favorites.

As sixties waned, Kurosawa began to lose popularity in his native land. Japanese audiences found his style too Western for their tastes. From a Japanese point-of-view there is merit to this. Once asked from whom he learned his craft, Kurosawa replied: “John Ford, John Ford, John Ford.” Those same tastes that had made him the leader in breaking Japanese cinema worldwide, now took him out of fashion at home. By the late 70’s Kurosawa had difficulty finding funding – until a new generation of filmmakers who worshiped his work – George Lucas, Francis Ford Coppola and Steven Spielberg – helped get the necessary backing.

An emergence of a world media culture rehabilitated Kurosawa’s reputation in Japan. By the time he died in 1998 at age 88, his reputation in the East matched his renown in the West. AsianWeek named Kurosaw “Asian of the Century” for the Arts, Literature and Culture. CNN called him one of the five people of the twentieth century who most prominently improved life in Asia.

In the end, Mifune, whose expressiveness revolutionized Japanese acting much the way Marlon Brando did in America and had occasion to work with directors from Japan and abroad over a hundred-and-fifty-film career, summed up Kurosawa’s achievement best:


"I am proud of nothing I have done other than with him."