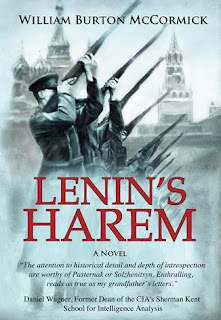 The Crime Films of Akira Kurosawa

Acclaimed Japanese director Akira Kurosawa is well-known outside his homeland for his samurai films and the Western imitations they inspired. The Seven Samurai became The Magnificent Seven. Yojimbo (loosely based-on the Dashiell Hammett novel Red Harvest) was remade often shot-for-shot by Sergio Leone as A Fist Full of Dollars. George Lucas transferred the plot and characters of The Hidden Fortress from sixteenth century Japan to a galaxy far, far away for Star Wars.

Fans of world cinema know that Kurosawa’s filmography is more varied than the samurai film, making contributions to numerous genres, including powerful dramas and adapting Shakespeare and Dostoevsky for Japanese audiences. No matter the source, the films always remained a product of Kurosawa’s own unique genius. In addition to directing, Kurosawa wrote or co-wrote his own screenplays and did his own film editing. A devotee of Orson Welles and John Ford, Kurosawa’s visual flair matches the former and his ability to capture sweeping landscapes and to film men-in-action may even surpass the later.

The five films we will discuss for SleuthSayers fall into the “crime film” category in some way or another. Noirs, gangster flicks, buddy cops, police procedurals, and Hitchcockian thrillers are found below. All five films feature Kurosawa regulars Toshiro Mifune and Takashi Shimura.


Drunken Angel made Kurosawa, Shimura and particularly Mifune stars in Japan. Two years later they would release Rashomon, which would break down the doors for Japanese films worldwide and change cinema forever. They are among the five films discussed over this two-part article. 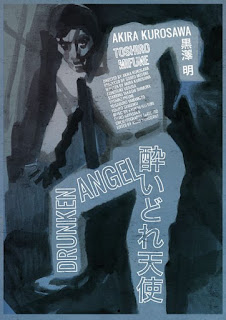 In postwar Japan, Shimura plays an alcoholic doctor named Sanada who runs a private clinic in the Tokyo slums. Once a promising physician, drink and a wild past derailed his career, leaving the middle-aged Sanada to eke out a meager existence while his old medical school classmates earn a good living attending to the wealthy. One night, a gangster named Matsunaga (Mifune) barges in seeking help for a bullet wound. Doctor Sanada attends the wound, but when he diagnoses Matsunaga with tuberculosis, the enraged gangster beats the doctor and leaves. Despite the assault, Sanada hunts down Matsunaga, insisting on treating the illness. This is nominally done to prevent the spread of TB to others, but Sanada also sees his own wasted youth in the younger man. By saving Matsunaga, Sanada believes he is in some ways saving himself. And so begins a combative, uneasy friendship between the two men.

There is some great noir-ish dialogue in Drunken Angel. When a thug threatens to murder the doctor, Sanada laughs and says: “I’ve killed more men then you ever will.” It is not only a taunt of the criminal, but a self-effacing commentary on his failed medical career, and more subtly, a partial hint at why he seeks redemption in Matsunaga’s survival.

The film effectively builds suspense and drama with two ticking timebombs. One is the progress of Matasunga’s illness and the challenge Sanada faces in keeping a dangerous, animalistic man on a recovery routine. The other is the pending release from prison of another gangster, Okada (Reisaburo Yamamoto), a cold-blooded murder who previously sexually abused Doctor Sanada’s assistant, Miyo (Chieko Nakakita). She is terrified of his return. Things are complicated further when it is revealed that Okada is Matasunga’s boss.

The story unfolds as a tragedy of shifting loyalties set within a war-devastated Tokyo. The U.S. occupation censors did not allow films that criticized the American presence and discouraged more than passing references to the war. Films of the time were encouraged to ignore the recent past completely. Despite this, Kurosawa’s film reveals the devastating results of the conflict. A mosquito-breeding cesspool, around which much of the drama unfolds, is obviously a crater from Allied bombing. Early Western advertisements are glimpsed on city streets. People talk of ration cards. The brothels, so common in the gangster world, play jazz music and waltzes indicating the “pan pan” girls who work there have an international clientele. The first Yakuza (gangster) movie released after the war, it is a gritty glimpse of the dark side of life in the years of rebuilding Tokyo.

All Japanese films made before 1953 are in the public domain. So, you can watch Drunken Angel with English subtitles online for free here if you wish. 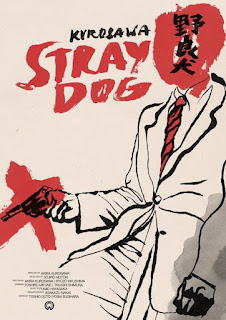 In this film noir, Mifune plays a rookie detective named Murakami, who has his Colt revolver picked from his pocket on the local trolley. Understandably upset, and pressured by his superiors, Murakami goes on a quest through the postwar Tokyo underworld to find his missing gun. Things only worsen, when it is discovered that the stolen Colt has now been used by the thief (or some other party) to commit a series of increasingly dire crimes. Soon Murakami is paired with an older detective, Satō (Shimura), to find the gun and solve these crimes.

Stray Dog is an important work in the history of crime fiction cinema. It is one of the earliest police procedurals with more attention to detail in investigative work than a Hollywood film of the same era. Secondly, it is considered the forerunner of the buddy cop film. Certainly, Mifune’s and Shimura’s chemistry together is never stronger, often funny, sometimes poignant.

Several set pieces display Kurosawa’s mastery. A scene at a baseball game is both humorous and exciting and the way the detectives locate their suspect especially clever. And a late-film moment where a key telephone conversation is in danger of being drowned out by passing thunder or nearby radio speakers is as suspenseful as any Hitchcock piece of the 40’s. The movie’s climax is gripping and beautifully filmed.

Like Drunken Angel, the postwar life is portrayed as unflinching as the censors would allow. People trade their government issued ration cards for a host of illegal services (guns, sex, loan sharking), the cards functioning as a sturdy currency when life is influx.

Though Stray Dog is cop film and Drunken Angel a gangster film, they make a natural pairing for those who want an excellent cinematic experience and a glimpse into the underworld of postwar Tokyo from the Japanese point-of-view.

Stray Dog is available to view online for free (with English subtitles) here.

If you’ve seen (or watch now) either Drunken Angel or Stray Dog, I’d love to hear your thoughts in the comments.

In Part Two, we look at one of the most influential films crime films of all time as well as two excellent Kurosawa noires from the 60’s.
Posted by mystery guest at 00:00