My Dinner With Lawrence Tierney — Part 2


by Lawrence Maddox
I'd been warned.

In my defense, when Lawrence Tierney threw his first punch at me, many of his current lunacies weren't yet public knowledge. Reservoir Dogs had just wrapped production the previous month and Tarantino was still piecing it together in the cutting room.

Tierney's fight with Tarantino and his subsequent firing wouldn't become part of the Tierney mythos until Reservoir Dogs made its big splash the following year, 1992. Sure, Tierney nabbed some TV roles in the '80s, but until Reservoir Dogs brought him back, he was known (mostly to film buffs) as that actor who scared off stardom with booze-fueled mayhem.


Still, when filmmaker Steve Barkett invited me to have dinner with the star of not only Dillinger (1945), but of my film noir fav The Devil Thumbs a Ride (1946), I knew things could get interesting.  I'd read about Tierney's exploits in Barry Gifford's love letter to American crime flicks, The Devil Thumbs a Ride & Other Unforgettable Films (1988).  "Tierney, famous for his role as Dillinger," writes Gifford, "and for his barroom brawls (he was stabbed in one as recently as 1973), and drunk driving arrests, is the wickedest looking big lug in B-movie history."

Steve gave me plenty to think about during the drive to Hamburger Hamlet to meet Lawrence Tierney. "I don't want to scare you. Lawrence can be a little weird," Steve said. "Sometimes he likes to mess with people." Steve told me that when he'd first met Tierney in 1990 at CineCon, Tierney was living in a halfway house.

Steve also told me that Tierney had vaguely mentioned an incident on the Seinfeld set that happened earlier in the year.  It involved a butcher knife from the set of Jerry's apartment, and Tierney told Steve that he'd only been playing around but the cast took it way too seriously. Tierney was originally considered for a recurring role, but was never asked back.

It ended up being perhaps the most well known story about Lawrence Tierney ("it scared the living crap out of us," Jason Alexander recalled), but it wouldn't become famous until Tierney made his comeback.

There were funny Tierney stories too. Steve said they'd once gone to a cafeteria together. "We got in line and Lawrence loaded up my tray with all kinds of food. All he put on his own tray was a small salad. When we sat down, Lawrence started eating most of the food he'd supposedly picked out for me," Steve said. "When Lawrence was done eating, he excused himself to go the restroom. Lawrence didn't know I saw this, but he went to the cashier and paid for only the small salad, stiffing me for all the food he ate." Steve said Tierney already owed him $50. Steve had driven Lawrence to the cafeteria, and when it was time to leave, he wouldn't let Lawrence get in his car unless he forked over the fifty bucks right there on the spot.

At first things were going great at the Hamlet. Tierney saw that I'd brought Barry Gifford's book, in which Tierney figures prominently. Tierney said he'd read it and didn't care for it. He took humorous exception to Gifford's essay on Born to Kill (1947), in which he writes "there's no decency at all in Lawrence Tierney's face." Tierney, whose face seemed to be naturally fixed in a scowl under his wide, bald dome, mugged menacingly for Steve and I. "Look at me! Is this a face without decency?" He asked. We all cracked up.

Steve and I were relieved that Tierney didn't order any alcohol, and we didn't either. "I'm buying tonight, fellas! Order anything you want," Tierney proclaimed in his gravelly voice. Steve looked at me dubiously.

Not so promising was Tierney's treatment of our waitress. He peppered her with personal questions, many in French. Nothing he said was lewd or profane, but he took it right up to the line.  I figured he was showing off for Steve and I, but it got uncomfortable. We told him that it was time to let her leave and do her job. She hurried away, clearly annoyed.

Steve got up from the table. When I phoned Steve a few weeks ago, he told me he'd left the table to  apologize to the manager for Tierney's behavior, and to warn him that it would likely continue.

I was across the table from Tierney, and if I had to guess, I'd say it was a left jab. It was quick and sharp and I could feel the air hit me on my nose. It had come short of my face by two inches at the very most. In less than what screenwriters call a "beat," he threw another. I was paying attention now and I blocked it hard with my forearm. It felt like a real punch.


I did some quick calculus.

If I pop him I could get arrested.

I'm broke and I'm going to have to call my parents to make my bail.

I don't wan't to clock an old guy. Even one that has been getting arrested for hurting people since Truman was in the Whitehouse.

That first punch was close, but I bet he missed it on purpose. He's messing with me. Right?

Getting up and leaving would've solved everything. I didn't want to do that, though. Maybe it was the burgeoning writer in me, but I wanted to see how it was going to play out.

If he'd actually tagged me square in the face, I guess I would've countered. I'm not kidding when I say I had this thought: I'm not going down like all those other clowns. I also remembered thinking one thing for sure;  He's messing with me. He purposely didn't hit me. He's trying to push me. He wants to see me get mad.

"Looks like you've still got it," I said, doing my level best to look unfazed. Tierney did a double take. For some reason this really pissed him off. "Damn right I still got it!" Tierney said loudly. "Make any quick moves like that again and you'll see. I'm just trained that way. I can't help it." I remember that I actually laughed at him. I hadn't made any quick moves, not that that mattered. "Try it and you'll see too," I said. It felt like low budget dialogue from one of his early noirs. My whole demeanor threw him off.

That's when Steve came back. "We we're just messing around. I like your friend here," Tierney said. Steve could sense something was up.  Along with Steve came a new waitress. This one seemed like a tough Hamlet veteran.  She didn't take any of Tierney's guff and shut him down when he wanted to chit chat. "Bring back the other waitress, you're no fun," Tierney said. "And remember fellas, I'm buying."

Just like that Tierney was holding court again. I kept a close eye on him as he reminisced about his Hollywood heyday. He gave his earlier directors bad reviews, except for Robert Wise. "Wise knew what he was doing." I was kind of bummed to hear he didn't have a good time on my favorite, The Devil Thumbs a Ride. "They shot it too damn quickly," he said.

A pattern to our conversation developed, which involved Steve or myself saying something, and Tierney disagreeing. Even if we agreed with something Tierney said, he'd still disagree with us.  Without warning, he would recite stretches of poetry, or break out in French. I wish I could recall what the poems we're. For all Tierney's bluster and volatility, it was clear he was a well-read guy who valued intelligence in others.

Also without warning were Tierney's continued jabs. He threw two or three more, but these were just for show and didn't come as close to hitting Steve or I as that first one had. I scooted my chair an extra inch away from the table. I also kept one hand free, and I rarely let my eyes off Tierney.  I've never had a harder time cutting a steak.

When Tierney finished eating he said he had a phone call to make. "I'll be right back," he said. The check came, but no Tierney. Steve ended up picking up the tab. "I knew he wasn't going to pay," Steve said. After a long wait, Tierney reappeared. "I'm buying next time, fellas!" He picked up my book. "Got a pen?" He asked. I'd given up hope of getting him to sign my book after that first jab. He stood next to me, patting my back like an old pal. I handed him my pen. 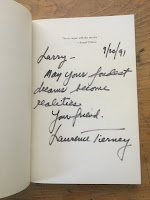 Almost thirty years later, I'm still proud that I stuck around and finished having dinner with Lawrence Tierney. In hindsight, considering that very same year he'd pulled a knife on Seinfeld and got into a fistfight with Tarantino, I came out great. I got a free meal, a signed book, and an experience I'll never forget. I felt that I'd passed a test that others, both in real life and on the big screen, hadn't. It happened when I didn't have much else besides dreams and ambitions. When I see the inscription that he wrote for me, the nearly elegant handwriting, I'm touched.

One of the best parts about writing this was catching up with filmmaker Steve Barkett. He has a contagious love of cinema and remains an encyclopedia of film knowledge. He's retired now, though he's working on a new release of Empire of the Dark (1990).  Alamo Drafthouse Cinema plans on releasing it later this year. If he ever stops by LA, I'm taking him to lunch at the Hamlet. 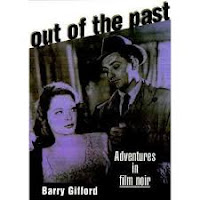 I reached out to author Barry Gifford, whose engrossing The Devil Thumbs a Ride & Other Unforgettable Movies made such a big impression on me, and inspired Lawrence Tierney to mimic his own mean mug over dinner. "My mother told me that when she was in Hollywood in the 1940s Lawrence Tierney made a pass at her but didn't throw any punches," Barry Gifford wrote back. "She declined his advances."  The Devil Thumbs a Ride has been expanded by the University of Mississippi Press as Out of the Past: Adventures in Film Noir.

Lawrence had two brothers, Ed Tierney and Scott Brady, who were also actors. Scott Brady didn't have the self-destructive bug that his brother Lawrence did, and was an instantly recognizable face on '60s and '70s TV. I know him best from The Rockford Files and his last film, Gremlins (1984). I asked Scott's son Tim Tierney if he had any thoughts on my dinner. "Larry, congratulations on surviving your encounter with my uncle unscathed when many others have fared much worse," Tim said. "Congrats also on spotting that he was much more than a brawler. Most people don't."