So true. So true. I've seen it more than once.

In 1988, when my first book (GRIM REAPER) was published, it debuted with a book by another New Orleans writer, a younger man with plenty promise, the critics declared. The same critics praised my book for its hyper-realistic depiction of police work, albeit the cops in my book drank too much coffee and used too much profanity. Never been in a police station. Obviously.

The young writer was Tony Buchsbaum and he wrote a good novel called TOTAL ECLIPSE, which deserved praise. According to Amazon.com, it is the only book Tony wrote. I remember him lamenting the fact his book was not a bestseller and the lack of a large advance for a follow-up book.

He seemed to fade away. Never heard about him again.

Not long after, a fellow named Seth Morgan was released from prison and wrote a book called HOME BOY. He became the toast of the New Orleans media and literary society. An ex-con who  wrote a good book. Only problem – he was jerk. Met him at a signing and he was loud, crude, rude, and bragged about being on cocaine. One night, he crashed his motorcycle into the steel railing of the Saint Claude Avenue bridge over the Industrial Canal. He took his girlfriend with him. He was a jerk. No, he didn't fade away. He killed himself and an innocent person in an horrific crash.

Sheila Bosworth wrote two excellent novels - ALMOST INNOCENT and SLOW POISON. Have not heard anything from her since the early 1990s.

Other local writers faded away from writing over the years. Some ran out of gas. Some bemoaned the writing life, the depressing business side of writing.

One who did not and inspired me is Valerie Martin, whom I met when she was between publishers. She told me to never stop writing, no matter how your career is going. It was not long before she linked up with a new publisher and her new book came out – MARY REILLY, nominated for the World Fantasy Best Novel Award and nominated for the Nebula Award for Best Novel. It was made into a movie.

I met Kate Wilhelm when I lived in Oregon and she was nice enough to ask about my writing. One thing she said was to keep writing and hone your craft. It is your craft.

We writers know the desire comes from within. We just cannot let the world put out that fire in us. 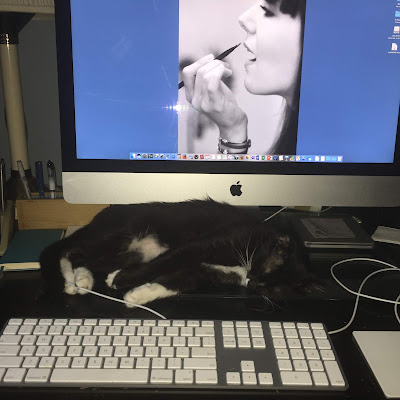 One of our cats helping me work