I love movies, but I don't bother watching them in movie theaters much anymore. Who wants to shell out 10 bucks to see something you may or may not like while sitting beside people who may or may not get a call from their bestie in the middle of the big twist...and you can't even pause the damn thing when you've gotta go to the bathroom?

But there is a series I'm willing to risk rude row-mates and a busted bladder for: the Marvel movies. I've seen every one in a theater from Iron Man on. Some were weaker than others (hello, Iron Man 2!) but even the less-than-stellar outings were worth a trip to the cineplex.

So you might assume I've spent the past month giddy with anticipation. The newest entry in the series, Captain Marvel, opened this weekend, and surely it's going to be the most marvel-ous Marvel movie of them all. I mean, hey -- it's got "Marvel" right there in the title, right?

Instead I've waffled on whether I'd see it at all. In the theater, I mean. It'll probably be streaming by August, so why not wait till I can watch it with a cold beer in one hand and a remote control (and its pause button) in the other? 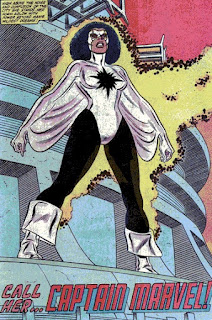 Part of the problem: I have zero connection to the Marvel Captain Marvel. (I'm kinda fond of DC's Big Red Cheese.) Marvel's Marvel may as well be The Astounding Generic-Gal as far as I know. Then again I had zero connection to the Guardians of the Galaxy and Ant-Man, too, and I happily stood in line for (and enjoyed) their movies. So a lack of familiarity shouldn't stop me.

But there's an addendum to the problem: the trailers. The ones I saw really did look like they were advertising The Astounding Generic-Gal: The Motion Picture. I'm not sure if it was truly an outgrowth of the film or a symptom of incipient Marvel movie burnout, but they gave me a strong case of the Been-There-Done-Thats.

I get the same feeling sometimes when I browse the shelves at a book store or library. I understand why the marketing department wants your new thriller to have one of those titles that's designed to sound like a million others -- Dark Destiny, Don't Look Back, Adjective Noun, Punchy Ominous Directive -- but, wow, it can feel cookie cutter.

I know that's nothing new, of course. Back in the day, every other mystery novel seems to have been called The Fill-in-the-Blank Murder Case, which is even more rote and unimaginative than Hushed Fear: A Thriller. (Aside: I know Hushed Fear is actually pretty bad, but every time I tried coming up with a decent generic Adjective Noun title I'd go to Amazon and see that seven authors had already used it.) Still, I don't think "But S.S. Van Dine did it!" is a good defense for naming your book The Mysterious Murder Murder Case or whatever.

The other day I got an email from a reader asking me to rank my own books from best to worst, and being (A) an egomaniac and (B) a masochist (both of which probably go without saying since I'm a writer) I obliged him. I won't bore you with the resulting list, but the gist I'll subject you to: The top was a mix from my "Holmes on the Range" and "White Magic Five & Dime" series, and the bottom was dominated by projects I'd taken on to appeal to specific organizational entities and, in the process, pay bills. (Yes, I'm being vague.) Put another way, at the top were the most Steve Hockensmith-y books, and at the bottom were the least.

Which makes sense, since "Steve Hockensmith" is a brand I enjoy, for the most part. (I wish it had straighter teeth and weighed five pounds less.) But it goes beyond that. I'm proud of my stuff that feels the most unique, but I also sincerely believe it's my best stuff. Writing to please myself, not to fit a particular niche or market, resulted in the highest quality. And, I'll add, more reader loyalty. Nobody -- and I mean nobody -- writes to ask me what's up with Project X: The Series That Shall Not Be Named. But I hear from readers eager for more "Holmes on the Range" and "White Magic Five & Dime" sequels all the time.

A few months ago, I was wrestling here with what my next writing project should be. I finally made up my mind...and now I'm changing it again. I spent some time working up a title and plot and pitch designed to appeal to a specific market, and the end result was probably sell-able and most definitely dull. Dull dull dull. It was going to be my version of Dark Destiny or Hushed Fear. There'd be no me in it, which would make writing it a chore and the end result forgettable.

Now that would be a dark destiny. Fortunately, it's one I've learned enough to avoid...even if it does mean going back to the ol' drawing board....

Postscript: I just bought tickets for myself and my 15-year-old son for a Captain Marvel matinee. The reviews have been pretty good, and I don't like the incel fanboy pushback against the film. Will my bladder take a beating? Absolutely. Will the people around us annoy me? Probably. Will the movie feel fresh and original enough to make those first two factors worth tolerating? Stay tuned.
Posted by Steve Hockensmith at 00:00