I recently read an article at Crime Reads with the provocative title: "The Art of the Twist Ending: 15 of the Greatest 'Twist' Endings Ever Written", by British poet and crime fiction writer Sophie Hannah.

I commented on this article in a recent call to friends to come up with a better, more comprehensive list:

"Her list is incredibly disappointing. Had she entitled it '15 of the Greatest Twists Ever Written in Domestic Thrillers and Literary Novels With Unreliable Narrators,' I feel like her list would have been more complete."

I wouldn't have even minded so much if she had made it, "15 of my FAVORITE novels with twist endings," because, as I said, this list is HIGHLY subjective.

I found her list doubly disappointing once I put it together that Ms. Hannah is the author selected by the estate of Agatha Christie to continue the Hercule Poirot series of novels (and not ONE of Christie's novels made her list. Not. ONE.), but it DOES mention The Woman in the Wind by the now-seeming colossal fraud A.J. Finn (Google it if you don't know what I'm talking about).

So I decided to make up my own list and use it as my next rotation post here at the Sleuthsayers blog.  But these wouldn't be my choices (well, not solely). I crowdsourced the question to my friends on Facebook.

The resulting list of titles is below. And while it's more comprehensive than Ms. Hannah's, it is by no means definitive. Also, I can't vouch for all of these titles, as I haven't (YET) read several of them.

That said, I trust the tastes of the friends who suggested this list. and so I offer them as fodder for those of you who love a good literary twist, and might be in the market for something to read.

Only one of Ms. Hannah's choices (Daphne Du Maurier's Rebecca) would come close to cracking my personal list, with another two (Gillian Flynn's Gone Girl and Dennis Lehane's Shutter Island) qualifying based on being mentioned by the aforementioned friends whose collective taste I so trust.

So here they are, in no particular order:

The Murder of Roger Ackroyd by Agatha Christie

The Cartel by Don Winslow

Cutter and Bone by Newton Thornburg

The Yellow Room by Mary Rhinehart

The Chill by Ross MacDonald 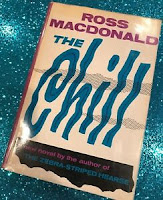 The Pick-Up by Charles Willeford

The Beast in View by Margaret Millar

The Ax by Donald Westlake

The Dramatist by Ken Bruen

And You Will Know Me by Megan Abbott

In the Best Families by Rex Stout

The Servant's Tale by Margaret Frazer

The ABC Murders by Agatha Christie

The Daughter of Time by Josephine Tey

The Poet by Michael Connelly

A Family Affair by Rex Stout

A Thief of Time by Tony Hillerman

We Were Liars by E. Lockhart

The Glass Key by Dashiell Hammett

The Collector by John Fowles

The Mysterious Affair at Styles by Agatha Christie

And of course no such list would be complete without this suggestion by our own Rob Lopresti. The hilariously titled Bimbos of the Death Sun, by Sharyn McCrumb!

A Heartfelt Thanks (Also in No Particular Order) To Our Contributors:

So many books, so little time! Hope you found some new titles to interest you! Thanks for reading, and see you in two weeks!
Posted by DoolinDalton at 02:15