Would You Eat THAT?

All my life I've been a picky eater. When I was very little, my mother tried to force me to eat foods I didn't like in order to encourage me, I'm sure, to not be so picky. But after I vomited beets all over the kitchen floor, she let me make my own choices.
Fast forward to adulthood. I'm still a picky eater--less so than in childhood but more so than many other adults. I know this from dining out with friends, though the point always hits home whenever one of those food quizzes comes up on social media. You know the ones: How many of these weird-sounding foods have you tried? I always surprise my friends (well, maybe not some who know me really well) because I score soooo low. Despite knowing I'm picky, the extent of it always seems to surprise people.

For instance, I once took a quiz about vegetables; how many had I tried? The grand total: 18 of the 110 vegetables listed, putting me in the lowest two percentile for the quiz. (Eighteen was actually a higher number than I'd expected.) I also took a quiz about Jewish food. I'd tried 38 out of 100 of  'em. Friends had thought I'd score higher on this quiz since I'm Jewish, but 38 was pretty darn high for me.

But those are specialized quizzes. What about overall pickiness? Here, Buzzfeed came in handy. They had a quiz to look at just how picky I am. All I had to do was check the foods I wouldn't touch, and there were a lot of them: hard cheese, soft cheese, blue cheese, goat cheese, cottage cheese. (You must be thinking I don't eat any cheese, but it's not true. Grilled cheese, good. Pizza, good!) And there were more foods on the quiz that I find it hard to believe anyone would eat, because I sure wouldn't. Bone marrow. Nuh uh. Tripe. No way. Sweet bread. Are you kidding? Blood sausage. Just the name makes me queasy. Bull testicles. Oh, come on! And last, but not least, the evil cilantro. No way, no how. Not gonna happen. At least soap doesn't pretend to be a food group.

Yet even as I write this, I know there are people out there who have probably tried all these foods and asked for seconds. I know this because I am friends with a particularly adventurous eater: author Catriona McPherson. She and I have a game we play. She tries to find normal foods I've actually tried or will eat again. I try to find a weird (at least to me) food she hasn't tried. A round might go like this: 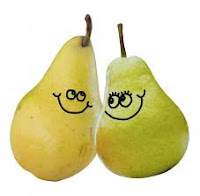 Actually, I don't recall if I've ever asked Catriona about bull testicles. Catriona, get ready for the next round.

It's usually difficult for me to score any points off Catriona because she is so adventurous. That vegetable quiz, the one where I had tried 18 of 110 vegetables--Catriona had tried 103 of them! I once asked her about a whole bunch of Jewish foods, but she had once attended a seder, so she trounced me in that game. And she's Scottish, so she's eaten all these foods I'd never even heard of before I met her--foods I wouldn't go anywhere near now that I have heard of them. (Tripe. Really, Catriona?) Amazingly, I've found one food she's never tried but I have: candy canes! Not that I like candy canes. I don't think I'd ever eat another one. And I'm sure I only had a bite of the one I tried in the past. But I tried it!

The beauty of being a picky eater is I read a lot of article about food. Not to learn to make them, of course, since cooking is something else I don't do. But I'm fascinated by foods other people will eat that I won't go near with a giant fork. And learning about foods sometimes gives me story ideas. That is partly how I came up with the idea for my most-recent story, "Bug Appétit," which appears in the current (November/December) issue of Ellery Queen's Mystery Magazine.  It involves what I would deem weird food, but not everyone agrees (based on my research), and that makes for an unusual plot (and unusual Thanksgiving dinner!).

If you want to read "Bug Appétit," it's not too late. The current issue of EQMM should remain on sale until around Christmas. I've seen copies at Barnes & Noble and Books-A-Million. And you can order digital copies through Magzter. Or you can subscribe to the magazine, in print or electronically, here: http://www.elleryqueenmysterymagazine.com/.