Round and Round He Goes 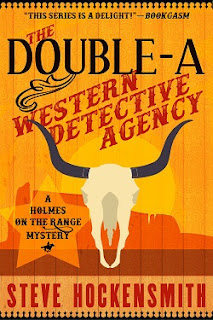 I had one simple goal for 2017: Write and self-publish a new novel in my old “Holmes on the Range” series. And I did it! At the very end of 2018. The book, The Double-A Western Detective Agency, came out a couple weeks ago, a year behind schedule. Hey, better late than never, right?

Now I have one simple goal for 2019: Write a book someone else will publish. Not that I expect anyone to actually publish it in 2019. You know how slowly publishing works. So you can mark your calendars for my publication day launch party...if, that is, you already have your calendars for the super-futuristic-sounding year 2022.

Of course, there are things you can do to improve your chances for both. Watch what you eat. Exercise. Practice breathing carbon dioxide and sulfuric acid. Move to Venus. Find some Venusians. Convince them they need a queen. Perfect your queen wave.

But it doesn’t seem very likely, does it? Even if an old pro were to try it — Queen Elizabeth, say — the odds wouldn’t be in her favor. I mean, I know she’s a tough old broad who’s been through a lot, but even something as straightforward as “Move to Venus” might be beyond her at this point. No offense, Brits!

So yeah, I’ve written and sold books, but I’m not going to assume I can do it again. It’s not the writing I’m worried about, although I’m leaning toward the old Monty Python approach.

What worries me is the queen of Venus part, a.k.a. selling a book. It stirs up that old debate most writers know so well — the one between the artsy angel on one shoulder and the money-grubbing devil on the other.

Commerce: Pah! Don’t be a fool! Write what will sell.

Art: You became a writer because of your love for stories. Let that be your guide now. Commit to the idea that excites you the most.

Commerce: You know what idea excites me? “I can pay the mortgage this month.” Thrilling, right? Commit to that, dude.

Art: There’s no guarantee you’ll succeed even if you try to follow the path of least resistance. All writing is a gamble. You might as well roll the dice on something you love.

Art [bursting into song]: You never count your money when you’re sitting at the table...

Both [singing]: There’ll be time enough for counting...when the dealing’s done.

Art: What were we talking about again?

I guess my angel and devil are easily distracted. Like me. But I like to think they can actually agree on something. And not just Kenny Rogers songs. Maybe there is an idea for a book that’ll satisfy both Art and Commerce — that can be both a passion project and a smart play. Hopefully I’ll find out next year.