The Broken Windows Tour of L.A.


by Paul D. Marks
“It is through that broken window that we see the world…”
–Alice Walker

A while back I did a tour of some of the locations in White Heat. Now, since it’s Hot Off the Presses—it came out yesterday from Down & Out Books—it’s the Broken Windows Tour of L.A. One of the things I really enjoy is writing about Los Angeles in the context of a mystery-thriller. In Broken Windows, P.I. Duke Rogers and his very unPC sidekick, Jack, are on the hunt for the killer of an undocumented worker.

Briefly, a little about Broken Windows: While the storm rages over California’s infamous 1994 anti-illegal alien Proposition 187, a young woman climbs to the top of the famous Hollywood sign—and jumps to her death. An undocumented day laborer is murdered. And a disbarred and desperate lawyer in Venice Beach places an ad in a local paper that says: “Will Do Anything For Money.”—Private Investigator Duke Rogers, and his very unPC partner, Jack, must figure out what ties together these seemingly unrelated incidents. Their mission catapults them through a labyrinth of murder, intrigue and corruption of church, state and business that hovers around the immigration debate. And that turmoil is not unlike what’s roiling the country today—in fact it might be seen as a precursor to it.

Hope you'll give it a read. And Reviews would be greatly appreciated...especially if they're good ones :-) .

Realtors say the most important thing is Location Location Location. I wouldn’t go that far in terms of writing. But location is important. So, hop on the bus for a handful of the many SoCal locations in Broken Windows:

The story opens with a young woman climbing to the top of the Hollywood Sign.

The Hollywood Sign beckoned her like a magnet—or like a moth to a flame. The sign glowed golden in the magic hour sun—that time of day around sunrise and sunset when the light falls soft and warm and cinematographers love to shoot. Like so many others, Susan Karubian had come here seeking fame and fortune, hoping to make her mark on the world. Oh hell, she had come to be a star like all the others. And she would do it, just not quite in the heady way she’d anticipated.

Duke, looking for a little R&R, takes his new dog, Molly, to the pier:

The Santa Monica Pier used to be one of my favorite places to go to while away time, do some thinking on cases when things weren’t breaking right. I still liked it, but not as much as before. They’d remodeled it, turning it into a mini Disneyland, new rides, new chain restaurants. Just another mini-mall-amusement-park, but with a saltwater view, with kitschy chain restaurants featuring Cowabunga Burgers and a food court, for crying out loud. And a lot more people. Tourists. Families with their kids. Freaks of all kinds. Still, the air was clean. And I thought Molly should get a taste of it.

At the pier, he runs into Marisol, whose brother Carlos, an undocumented immigrant, has been murdered. Later, Duke takes on the case of trying to find out who killed Carlos and why.

We headed back down the pier. In the distance a woman with coal black hair sat on a bench staring out to sea, her back to me. The wind pitched her hair over her face; she swept it away with a backhand. Something seemed familiar about her. When we got closer I saw that it was Marisol. She didn’t see us and I debated whether to approach her. “Days like this are my favorite time at the beach,” I said. She turned around, looking up at me through a tangle of hair. It looked like she had been crying…

Venice and the Venice Beach Boardwalk:

The bad part of Venice is where Eric, a disbarred lawyer, lives in a not so nice place compared to what he had been used to:

He opened a window, could smell the briny ocean air and hear the waves booming in the distance. This was Venice, California—crammed onto the SoCal shore between tony Santa Monica and haughty Marina del Rey—but not the Venice of the tourists and beach people. And this certainly wasn’t what Abbot Kinney had envisioned when he wanted to recreate Italy’s Venice in Southern California, complete with canals and gondoliers. No, Kinney must be rolling over in his grave these days. This was the other side of Venice. No canals here. No bathing beauties. Unless cockroaches had beauties in their midst, maybe to another cockroach. Miss Cockroach of 1994. Would she want world peace too? Or just a crumb of leftover bread?

Eric puts an ad in the paper. At first we’re not sure how he ties into the main story of Duke trying to find Carlos’ killer…

And he [Eric] opened the L.A. Weekly underground paper. Today was the day his ad was due out. He scanned a few pages until he came to it:

“Contact Eric,” it said, and gave his phone number. So far the phone hadn’t rung, but it was early. Breakfast time. He figured he’d sit by the phone today and hope for the best. If something didn’t come along, he wouldn’t even be able to pay the rent on this hell hole.

He looked at the phone, willing it to ring. When it didn’t, his eyes shifted back to his ad, to the headline: “$$$ Will do anything for money. $$$”.

At one point, Duke also finds himself down in Venice:

When Abbott Kinney founded Venice, California, south of Santa Monica, in the early nineteen hundreds, he had big dreams for it. Modeled after Venice, Italy, complete with canals and gondoliers, it was supposed to be a place of high-minded culture. Maybe it was, a hundred years ago. I don’t think so. And certainly not today. Now it was divided between the Hollywood Haves, who filled many of the little, but exceptionally expensive homes along the canals, and the low-rent people a few blocks away, whose homes were the gangs they belonged to more than the houses they lived in. Los Angeles Schizoid Dream.

A down on its heels bar on Sunset Boulevard, where Duke hangs out sometimes:

I opened the Café Noir’s door, a flood of velvet blackness enveloping me as I entered. The transition from daylight, even overcast daylight, to the Noir’s dimness made me close my eyes for a few seconds. Nat King Cole’s “The Blues Don’t Care” sinuously threaded its way from the jukebox. The bartender nodded. I nodded back. I settled in a corner at the far end of the bar, hoping no one I knew would join me. It wasn’t crowded at this hour, but you never knew. And right now I just wanted to get lost in a drink and the shadows, in the music and the anonymity of a dark corner.

In the 1990s, Smuggler’s Gulch near San Diego was just what its name implies, a major smuggling point for people coming over the border. Jack and Duke have a “meet” there that goes bad and later Duke returns to the “scene of the crime,” so to speak:

I figured Jack wouldn’t be back and I knew I wouldn’t be able to sleep so I packed Molly in the Jeep and hit the freeways. Southern California’s become one long rush hour for the most part, but at that time of night, traffic moved at a good clip. We drove south, toward the border. Landed back at Smuggler’s Gulch. Rocky Point. I surveyed the area with night-vision binoculars, making sure no cops, Border Patrol, or even some of Miguel’s friends were there. I knew Jack had hidden the body well, but you can’t be too careful. When I knew the coast was clear, we walked to the rock. I sat there with Molly on the same spot where I’d been shot. She’d been getting stronger by the day and I thought she might enjoy getting out of the house.

So, there’s a mini tour of just some of the L.A. and SoCal locations in Broken Windows. Hope you might want to check the book out—it’s available now.


Broken Windows released on September 10th and is available now at Amazon, Barnes & Noble , Down & Out Books and all the usual places. 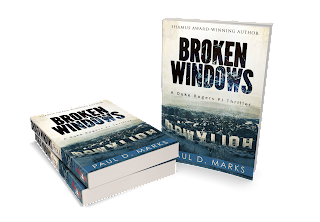 Peter Anthony Holder interviewed me for the Stuph File. It’s short, 10 minutes. You might enjoy it. It’s episode 0471 at the link below. And check out the Stuph File too:

And I was also interviewed by Dave Congalton at KVEC radio: