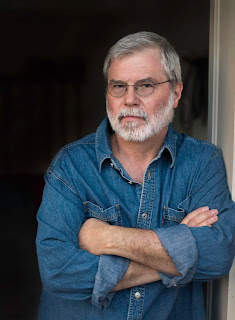 When Brian Thornton described one project for which he wrote an average of 1,425 words/day (“La Joie de l’Écriture,” my heart palpitated with anxiety. That’s almost 2.5 times greater than my production rate during the best year for which I have records.

That’s because I’m a slacker, never producing near as many words on any given day as I know I’m capable of producing. I allow myself to get sidetracked—by research, by other story ideas, by Twitter tweets, by Facebook posts, by blog posts, by new online forms of solitaire—and I look up later to discover I’ve only produced a paragraph or two.

And yet, I wrote 75 short stories in 2009 and 32 in 2017, so even my least productive year resulted in a significant number of completed works.

Maybe the way I track word counts skews my numbers. I don’t track words as I produce them; I only count the words in completed, submission-ready manuscripts.

In any given year I produce an ungodly number of partial manuscripts, stories I’ll finish one of these days, if I live long enough.

I set the stories aside for a variety of reasons. Some are beginnings without endings. Some are story doughnuts, missing the all-important middle that gets readers from beginning to end. Some are rough outlines. Some are stories beyond my current ability to write. Many, though, are stories without markets. For example, I continue generating story ideas for confessions, even though the last two confession magazines ceased publication more than a year ago.

As a short-story writer (and, likely, as with any other kind of writer), what matters most are finished manuscripts, so I’ve never set writing goals that involve number of words or number of pages or amount of time spent at the keyboard.

My annual goals, ever since setting them many years ago, are 52 acceptances and 52 new stories each year, or an average of one of each per week. Reprints carry the same weight as originals when counting acceptances, so the six reprints I placed a few weeks ago brought my total acceptances for the year to 32, which put me exactly on schedule as I write this. My production of new stories this year to date totals a paltry 13.

I have several stories near completion, but even were I to complete them all before month end, I would remain behind schedule. There are several reasons for the reduction in output, some of them, perhaps, the subjects of future posts, but the net result is that I am unlikely to meet my writing goals this year.

As a prolific slacker, I don’t chide myself for failing to meet my productivity goals nor do I allow myself to slip into a woe-is-me funk that further erodes my productivity. Instead, I do my best to deal with the things that sap my creativity or keep me away from the keyboard. Then, like now, when I am at the keyboard, I spend a little less time playing solitaire and a little more time stringing words together.

I may never join the ranks of the thousand-words-a-day working writers Brian cited—heck, this post won’t even reach a thousand words!—but I’ve found that my slacker’s approach allows me to produce an ever-growing body of work.

So, no matter how you set your goals—by the word, by the page, by the manuscript, or by the length of time at the keyboard—realize that you may not always meet those goals.

Whether you do or you don’t, the most important thing you can do is to keep pressing forward. As my youngest son recently said, you don’t fail until you quit. 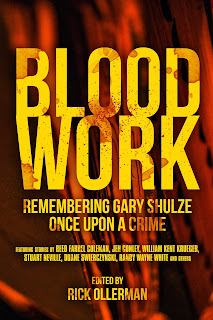 Released at the end of August, Blood Work (Down & Out Books), edited by Rick Ollerman, celebrates the life of Mystery Writers of America Raven Award-winning Gary Shulze, long-time owner of the legendary Once Upon A Crime bookstore in Minneapolis. Gary left an indelible mark on the crime fiction community across the world before he passed away in 2016 due to complications from leukemia. The anthology includes my story “Backlit.”

If you’ll be at Bouchercon in St. Petersburg this week, stop in on “This Ain’t Your Mama’s Orange Juice—Writing Pulp,” a panel in which I’ll join Frank De Blase, Kate Pilarcik, and moderator Steven Torres. We’ll start squeezing oranges at 4:00 p.m., Saturday, September 8.

And I’ll be speaking about “Short Stories: From Concept to Sale, How This Form Can Satisfy,” at the noon MWA-Southwest luncheon, September 15, at Carraba’s, 1399 South Voss, Houston, Texas.
Posted by Michael Bracken at 00:00