(Today I'm interviewing Bainbridge Island's own Jim Thomsen. A former newspaperman and current freelance writer/editor, Jim recently did a stint as a bookseller and assistant events manager at Eagle Harbor Book Company. He came away from the experience with a new understanding of the importance of book store events for authors, and some innovative ideas about ways in which authors can leverage these events to help build brand and leverage sales. Jim is a frequent guest contributor to this blog, including his most piece, celebrating decades of distinctly Seattle-centric crime fiction, which can be found here.)

Let’s talk about your unique experience within the publishing industry first. Can you walk readers not familiar with your work through what kind of work you’ve done so far?

I work as an independent manuscript editor, doing developmental and line-editing work. I've done contract and one-off work with publishing houses before, but I prefer working directly with authors, who generally fall into two camps: 1) self-publishers; and 2) authors under contract who don't trust the quality of the editing they get from their publishing house. I prefer to be a free agent, to give my clients my best advice without constraints, and usually work for publishing houses is defined as much by what you aren't allowed to do as what you are. I've worked with a few hundred clients since starting full-time in 2010, just ahead of the end of my 25-year career as a newspaper editor.

Most recently, I worked for just shy of seven months as a bookseller and assistant events manager at my hometown bookstore, Eagle Harbor Book Company on Bainbridge Island.

And you’ve attended your fair share of writing events as both a guest speaker and as an audience member over the years. So how did taking on this new role change your outlook on bookstore events?

I had a very one-sided view of what makes for a successful author event at a bookstore, and probably an uniformed view of what the bookstore is obligated to do vs. what the author is obligated to.  Much as naive authors think their publishing houses should arrange all their publicity and promotion, so do they think that bookstores should do all their heavy lifting for an event. Not so! In fact, that mindset is almost certainly a recipe for failure, and that's a knock on the author, not the bookstore. Both have their jobs to do, and they work best when they approach the job of getting butts in the bookstore seats as a teamwork task. Before, I thought bookstores made most of it happen. Now I know better.

Can you walk us through the process of preparing for one of these events on the bookstore/event staff side?

My immediate boss at Eagle Harbor Book Co., Victoria Irwin, is a stone pro at this job, and it was a pleasure to follow how she did her thing. Sometimes an author or an author's publicist approached us; sometimes we looked through upcoming author-tour announcements in online trade publications and thought, "Hey, this author's book has a lot of buzz, and she's going to be in the area during a time when we have some openings on our calendar, and we think our readers will like the subject matter, so let's make our interest known and hope for the best."

And sometimes an event just magically drops in our lap. A recent example: Jeff Benedict, the co-author of the new big-buzz Tiger Woods biography, had centered his last book on the U.S.'s top food-safety lawyers, a guy who lived on Bainbridge Island. The lawyer's wife approached us and said that if we wanted Benedict to speak to our customers, she could arrange it. How awesome was that? That was a "get" way out of our league, and Benedict was wonderful — he flew out from Boston just for us, and gave a terrific talk.

Anyway, once we agree to a calendar date with an author, we really go to work. We decide how many copies of the book to order, and order them, which is a fine art in itself — trying to gauge customer interest in an event. Over-ordering, especially with independently published books outside the Ingram ecosystem, can be risky because returns aren't guaranteed and we have to depend on the good faith of the author in a consignment arrangement.

Then, we hit all the publicity bases: We put the event in our website calendar and our monthly newsletter. We post about the event on our Instagram, Twitter and Facebook sites. We write press releases and send them to local media — not just news outlets but anybody who has a calendar/newsletter and a vested general-community interest. We enter the event in the local online calendars — in Eagle Harbor's case, the Bainbridge Island Chamber of Commerce and the two newspapers that cover Bainbridge — the hometown Review and the Kitsap Sun. We do a new round of social media posts, with links to interviews the authors have done or reviews of their books on respected sites like Publishers Weekly, Kirkus, Booklist, etc. Lather, rinse and repeat, all the way up to the afternoon of the event. And of course, we talk the event up with our customers, and do window and front-of-the-store signage and displays.

But we also check in with the author. Do they have local friends? Are they promoting the event in person or via their online platforms? Are they planning to bring enticements like baked treats? (Memo to authors: Everybody loves baked treats. You cannot go wrong bringing goodies to your event.)

Through all these factors, we get, hopefully, a ballpark idea of how many people are going to show so we can clear the right amount of event space in the middle of the store in a timely fashion.

That said, we often guess wrong. Think of the last party you planned. My experience with party planning follows a weird "rule": One-third of the people who say they'll show don't, and a handful of people who gave you no indication they were going to come, did.

The sweet spot, for us anyway: The local author with lost of local friends who does their share of the promotional heavy lifting. Whether they're self-published or New York-published doesn't matter as much as the fact that they have a lot of church or work friends or neighbors or relatives who wish them well and want to show their support. The event then takes on a kind of happy-kaffeklatsch feel, which is fine with us.

There's some genre bias as well. For us, nonfiction books with a niche interest do much better than fiction — we have a number of local rock-star genre novelists whose best-seller statuses don't necessarily translate into big bookstore crowds. The readers tend to bond more with the books than the person who wrote them, is the best I can guess. Though we have one Bainbridge novelist who's such an outsized, hilarious, charismatic presence that we decided to "go big" for the recent launch of his latest novel, and drew some 200 people for a party at a local community center. That's more the exception than the rule, in my experience.

Crime fiction? Sadly, not so much. My last night as a bookstore employee featured a thriller author, Owen Laukkanen, who was doing a self-financed cross-country tour behind his most recent book,which had gotten good reviews. But based on previous experiences with events featuring crime authors, I knew we needed to do more than promote the book. I thought I had the key: Owen kept a blog in which he talked with rare candor about his struggles as an author and as a person, and I thought that humanizing element would add an extra dimension to his potential draw at the event. I posted several blog excerpts in several different social-media venues, trying to whip up interest. It didn't work. We got nine people.

I was discouraged, and though Owen was a good sport about it, I know he was disappointed as well. In his blog the next day, he wrote: "I had a blast at every one of my events, but, man, it’s sure getting old trading excuses and rationale for low numbers with sympathetic booksellers. If it’s a sunny day, it’s too nice out to be in a bookstore. If it’s a rainy day, it’s too miserable out to leave the house. Too hot. Too cold. Wrong time of year. Or maybe I’m just not a very big draw." He concluded with "Is it possible to feel discouraged without feeling the world owes me anything more than it's given me?"

I can't say I blamed him much for feeling that way. I felt the same too.

(BTW, that's not why I quit! I left to deal with family matters, and put more time into my resurgent editing practice. And I left on great terms with everyone.)

What do you think of the recent trend of authors “teaming up,” and doing double signings?

It's rare that we have precisely those kinds of events. Multi-author events at Eagle Harbor tend to fall into two categories. The first is what I call the big-big events, like Independent Bookstore Day, in which several Bainbridge Island authors served hour-long stints throughout the day as "guest booksellers," chatting with customers and offering their recommendations. Or Summer Bookfest, which we co-hosted with Seattle7Writers. Nineteen Seattle-area authors for two hours of mingling and handselling.

The second kind of multi-author event is the "in conversation with" event, in which we pair an out-of-town author with a local author who writes in a similar genre or vein for an hour or so of Q&A before turning it over to the audience. Those seem to work well, as we draw a deeper pool of prospective attendees who may be fans of one author or the author, and walk away fans of both. 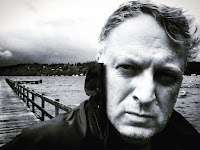 Jim Thomsen is a writer and book-manuscript editor who lives in his hometown of Bainbridge Island, Washington, a 35-minute ferry ride west of downtown Seattle. He was a newspaper reporter and editor for 25 years, including stints at The Seattle Times and The Kitsap Sun. A longtime board member of the Mystery Writers of America-Northwest chapter, his crime fiction has been accepted for publication in Shotgun Honey, Pulp Modern, Switchblade and West Coast Crime Wave. He can be reached through his webpage: http://jimthomsencreative.com/

Posted by DoolinDalton at 01:20